Travelling to space and seeing the Earth from above is touted as a profoundly unique, once-in-a-lifetime experience. Despite the excitement that has come with space travel, the industry has also faced challenges in recent years, including launch failures, delays and criticism from people that argue there is no value in space tourism except for billionaires “joyriding to space”. Even though suborbital space travel is not as technologically challenging as orbital and beyond Earth space travel, the suborbital segment has been in development for decades. So, with much delays, are we looking at a market that has found its ‘public’, despite all hurdles? It is safe to ask about what the real value proposition of suborbital space tourism and travel really is given it is facing so much challenges.

NSR’s Space Tourism and Travel Report, 4th Edition forecasts suborbital space travel to generate cumulative revenues of $1.1 B by 2032 with  90% of space travelers on suborbital rides. However, we saw in the recent past, that failures have put a damper on expectations.

Blue Origin’s launch failure in September has raised concerns about the continuity of suborbital space tourism. Will this inhibit the pace of space tourism and will regular flights take off in 2023? Furthermore, will Virgin Galactic finally make its comeback this year, after so many delays and financial hiccups? The market remains supply constrained, and regardless of these delays and launch failure investigations, ticket sales for suborbital flights have been going very well: Virgin Galactic sold over 700 tickets, increasing prices to $450,000 and Blue Origin’s sales reached $100M. Meanwhile, PD Aerospace, i-Space, Beijing Lingkong Tianxing Technology Corporation and CASC are also developing spaceplanes or rockets to offer space tourism flights or point-to-point (PTP) travel. In the context of high uncertainty about whether Blue Origin and Virgin Galactic will fly crewed missions this year, the investments into the development of vehicles from competing firms increases the likelihood of suborbital space tourism flights to take off in the near future. 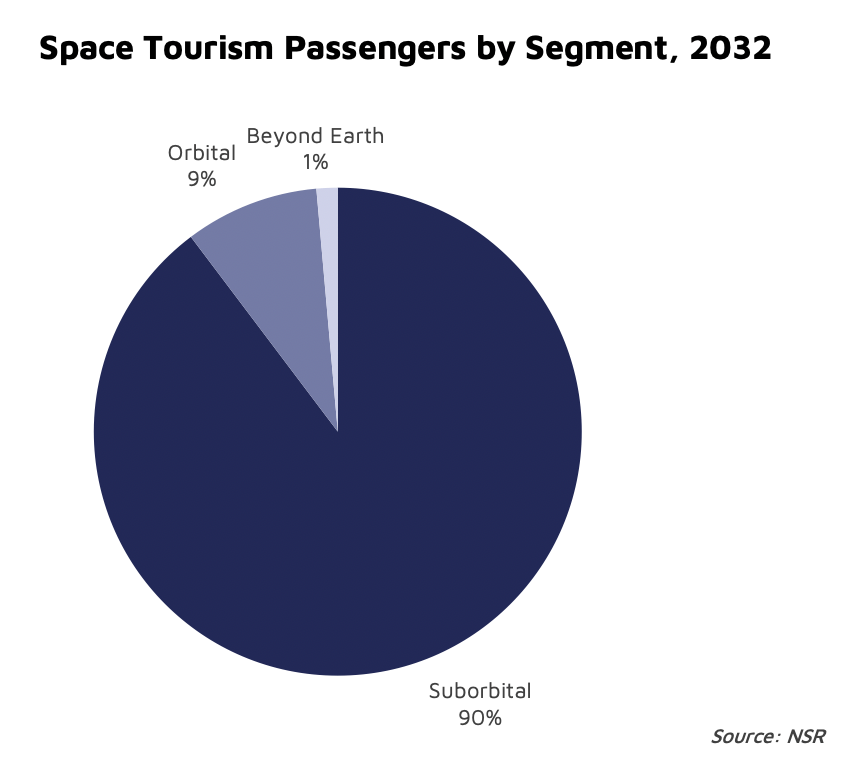 Crewed suborbital space missions have not gained much traction since the sixties until Blue Origin and Virgin Galactic’s suborbital flights took off in July 2021. Meanwhile, Blue Origin flew six times to an altitude of approximately one hundred kilometers while Virgin Galactic has been upgrading its carrier aircraft and ordered a new plane to increase flight cadence. Notwithstanding the excitement for space tourism, missions from the past two years have not received praises only. These have been widely criticized by climate activists and the secretary general of the United Nations.

In response to this, U.S. Congressman Earl Blumenauer introduced the Securing Protection Against Carbon Emissions (SPACE) Tax Act legislation, which is meant to tax commercial crewed space flights for purposes other than scientific research. This would increase pricing of suborbital space tourism by 10%, or approximately a $2M launch tax for orbital flights and $100,000 for suborbital flights and could demotivate some of the potential clients.

A Rhyme and Reason

Amidst the heavy criticism, people have been buying space tourism tickets for years and are still patiently waiting to get their astronaut wings and living the microgravity experience. This is a key driver for most space tourists. People such as the celebrated Wally Funk and Sharon Hagle have waited for six decades to go to space. The space tourism market has a higher loyalty and retention rate than most other markets.

NSR forecasts for rocket and plane-based flights to suborbital space is still a semi-conservative one, mostly constrained by supply and technological developments. With the long-time loyalty and excitement, if even a slightly larger amount of the market were to be addressed, revenue potential would grow significantly. 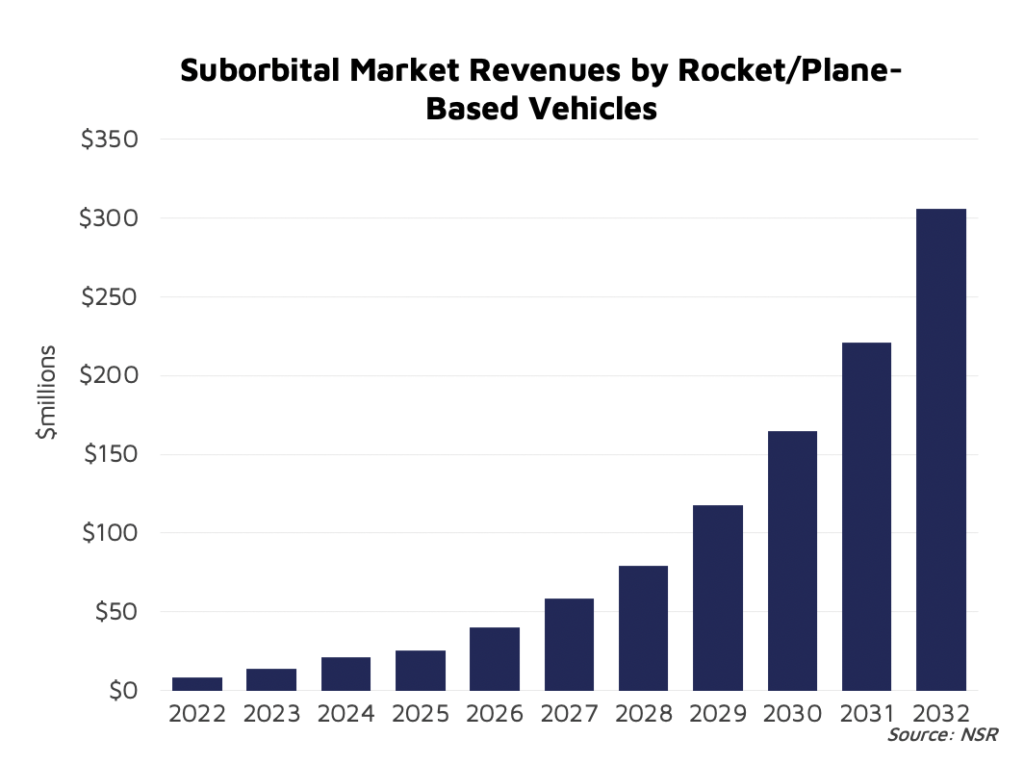 In comparison with tourism, the revenue potential for science missions is lower, but science missions have seen consistent support from the US and EU governments throughout the years. Otherwise, for academia and private researchers that generally have low research budgets, the disadvantages presumably outweigh the advantages: short duration flights that are expensive, safety and reliability remain a concern, and it still faces competitive pressures from parabolic flight providers. Decades ago, NASA tried to engage the scientific community into suborbital research but got few responses to its RFI. However, the space industry has evolved much since then, and as more people are flying to commercial space stations in LEO and beyond Earth, more scientific research in suborbital space is expected to take place to support astronauts’ health and safety in space.

PTP and high-speed suborbital space travel appear more appealing for several reasons: industrial and economic benefits similar as in shipping and aviation; increased efficiency and cost-effective transport of cargo, reduced reliance on land transportation to locations that are hard to reach, global trade, humanitarian aid and disaster relief.  It will also serve passengers that want (and can afford) to travel quickly from one side of the world to the other in a matter of hours.

The challenges are that technology and reliability are still low and slowly being developed and that the approach to the market is fragmented. So far, mostly small spaceplanes being built can accommodate few passengers for military or space tourism purposes. Even though it is unclear if SpaceX’ Starship would be used to transport a large passenger capacity in suborbital space, Starship could possibly provide high speed global transport in one hour for a hundred people and has a payload capacity of 100 tons to LEO. China Aerospace Science and Technology Corporation (CASC) also announced plans to develop a hypersonic aircraft by 2045 with the capability of carrying one hundred passengers.

Similar to the early days of the automotive, aviation and railways industries, highspeed suborbital space travel is controversial due to high construction costs, and as most people will not be able to afford it yet, the sector will also be targeted at high-net-worth individuals and Gov/Mil customers in its early years.

For PTP to become successful with the public in the long term, the economic benefits must outweigh the costs and environmental effects. If suborbital flight providers can demonstrate that their services are more fuel efficient than other forms of transportation, lead to reduced carbon emissions and transport cargo more efficiently, PTP travel will be the new form of safe and reliable travel globally. Until then, the development of the sector and its vehicles will depend on those who want to benefit from reduced travel time, chiefly high-net-worth individuals and Government and Military to support humanitarian aid & disaster relief operations.

This path forward still relies on the longstanding loyalty of potential passengers, the funding that has gone into the development of a dozen new vehicles, the government and military support in the use of these vehicles, and the general interest in the market.

Several players are currently developing space planes and rockets, but the industry’s approach is still very fragmented, and technological development of more advanced vehicles with larger payload capacities will take time. As a result, the sector’s growth in the short term will be more dependent on the demand for suborbital space tourism and travel from high-net-worth individuals and government investment.

While the passenger and revenue potential for suborbital space tourism is high, the real value proposition may not be found today but rather in it future, in that it represents a key stepping stone in the direction of point-to-point travel, with a lot of technology development that will have an impact on this future services on space, transport, and other related sectors.