The Road to Free Wi-Fi Onboard Airplanes

The Inflight Connectivity (IFC) business was hit hard by COVID19, on the back of drastic downtime in aviation traffic in 2020. As a result, the segment saw on average a 35% decline in annual retail revenues last year, according to NSR’s Aeronautical Satcom Market Report, 9th Edition. However, as aviation traffic continues to bounce back following widespread vaccination programs, the IFC market may now be on the path to recovery. 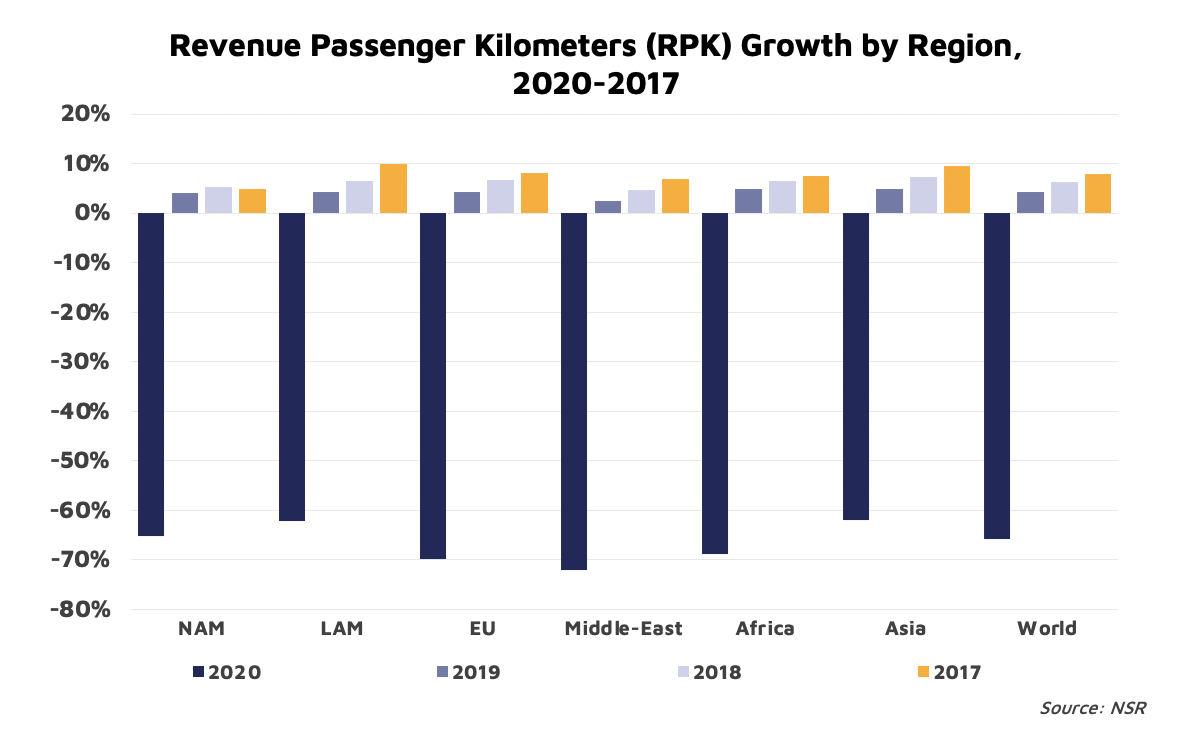 The market is beginning to see a rebound in some regions, while other places with existing travel restrictions are not expected to return to 2019 levels until 2022/23. For example, the U.S market saw a massive uptake in domestic travel last summer due to pent up demand from months of staying at home; so did passenger appetite for onboard Wi-Fi. In fact, passengers had a stronger demand for inflight Wi-Fi due to the change in working habits orchestrated by the pandemic, where millions of people became accustomed to working remotely from anywhere.

NSR gathers that demand for inflight Wi-Fi is at an all-time high as passengers return to flying. This trend pushes airlines to a tight position of making the critical decision of defining their inflight connectivity strategy. One of the tough choices airlines have been battling is whether to offer free onboard Wi-Fi and how to bankroll the associated expenses. Before the pandemic, the industry consistently hinted at the promise of third-party sponsorship and opportunities in e-commerce. While the former has shown some fruition with new partnerships in recent years, the latter seems to lack reasonable prospects – who gets on the plane for a shopping spree? Meanwhile, since NSR’s Claude Rousseau published the article “Monetizing IFC: The 3rd Party Promise” in May 2019, not much significant progress has been made in onboarding third party sponsors for IFC. What then is the future of free onboard Wi-Fi?

NSR’s AERO9 report determines that free inflight connectivity is still feasible in the near term and will become more widely adopted by various airlines within the decade. The pertinent question is, how will the industry get there? NSR sees three key factors as harbingers of that possibility: sufficient capacity supply, contract optionality and third-party sponsors. Unfortunately, the conversation has predominantly focused on the sponsorship factor, forgetting that the aero market needs adequate satellite capacity to power high passenger take-rates that will become available with a free service model. The good news is that the industry is on the verge of solving the capacity problem.

One major challenge facing the IFC market is limited capacity. Given that the IFC business was started and dominated by service providers who purchased capacity from satellite operators, it is not a surprise that capacity has historically been pricey and limited – just enough to meet contract SLAs. As a result, capacity constraints arising from cost and limited coverage have been the bane of IFC take-off. 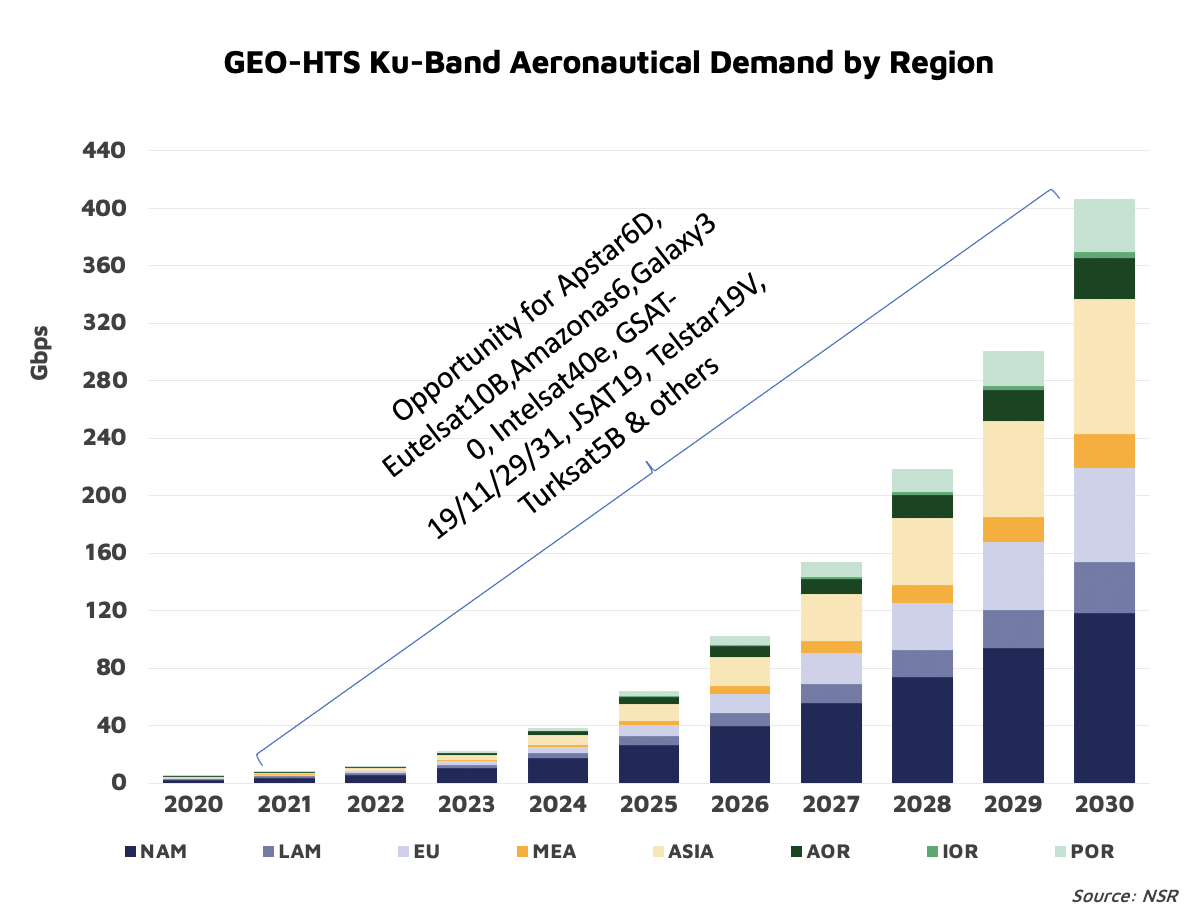 NSR sees the IFC market has sailed from the meagre 5-15 Mbps throughput allocated per aircraft at the beginning of IFC 2.0 to north of 50 Mbps. Some IFC providers claim to offer 100+ Mbps, with plans to more than double the number with new capacity coming on board and some equipment upgrades. 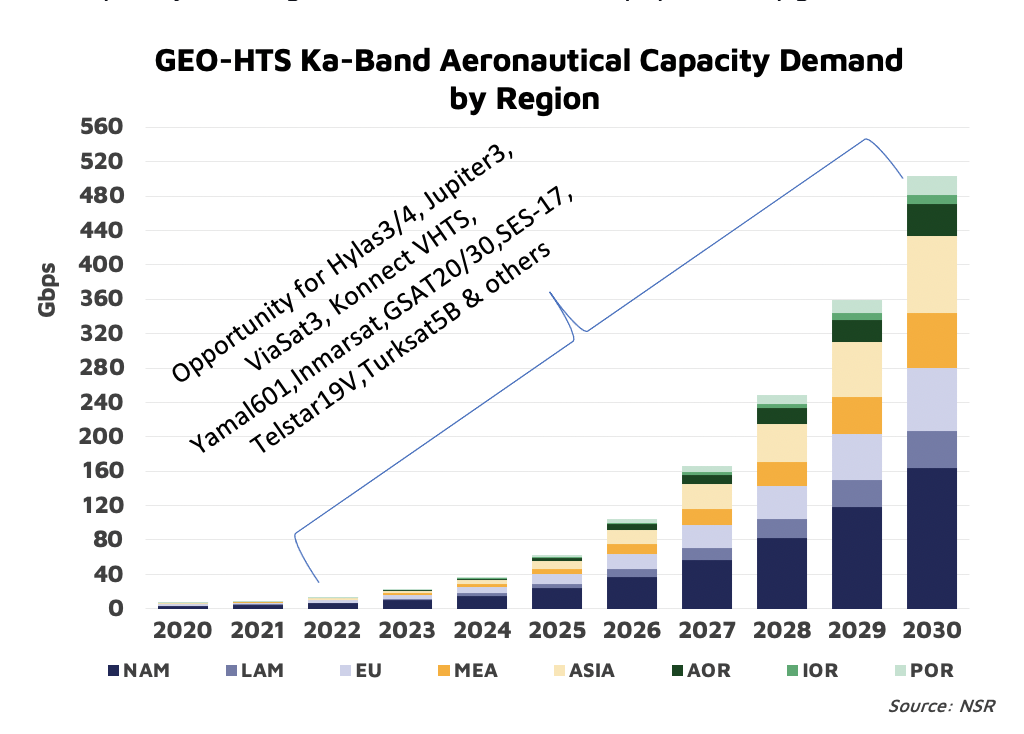 To achieve widely adopted free Wi-Fi onboard, many service providers must massively scale their capacity to support passenger take-rates from the current 4-8% to the north of 75%. With the free service model in mind, NSR forecasts that HTS capacity demand alone will grow from 13 Gbps in 2020 to 924 Gbps by 2030. A free service model on a Wi-Fi network that actually works will increase user take-rates and bandwidth utilization, driving the exponential growth of capacity demand.

The good news is that the industry landscape is changing to meet this reality with vertical integration and expected satellite supply coming up in the next few years. Starting with SES-17, which is set to launch on 22 October 2021. SES-17 will serve the aviation market over North and South America, with Thales as the anchor customer for inflight connectivity. Another example is Viasat’s 3rd gen GEO constellation, which will feature three HTS satellites of 1+ terabit per second capacity each, with the first launch planned for H1 2022 to provide coverage over the Americas. In addition, as seen in the chart above, other new satellites are scheduled for launch to bridge the capacity gap, including those owned by IFC service providers. The latest announced mobility-focused capacity supply is Anuvu’s micro-GEO satellite constellation comprising of potentially eight 400kg satellites, with the first two planned for launch by 2023. There is also the expected capacity influx from LEO constellations, which will be a fresh but intense competitive energy into the IFC market.

Historically, airlines have faced the option of paying the upfront cost of equipment installation (CAPEX) and monthly recurring cost (MRC) in an airline-directed business model while charging passengers for service fees on a bandwidth-sized basis. However, considering how exorbitant MRCs can be, airlines are forced to charge high prices, which directly lowers take rates and keeps monthly capacity utilization per aircraft low. Alternatively, service providers “rent a space” per aircraft in an SP-directed retail model, subsidizing CAPEX for the airline and agreeing to a revenue share model.

The downside to both models is that IFC take rates have historically remained low, between 4-8% for legacy FSS and ATG systems and 12-15% for new generation HTS systems. This constraint is partly due to the rationing of $ per megabits per passenger or per throughput allocated per aircraft in legacy IFC offerings. So how is the market evolving to address the challenge?

The contract optionality is driving a new business model known as the hybrid model, which allows airlines more flexibility to encourage passenger take-rates and bandwidth utilization without directly inflating the cost per megabyte utilized. The hybrid model is rising in the maturing North American market, where up to three large airline groups have already adopted the model. Examples include American and JetBlue on a Viasat service, and Delta with Intelsat (formerly Gogo CA) as the service provider. 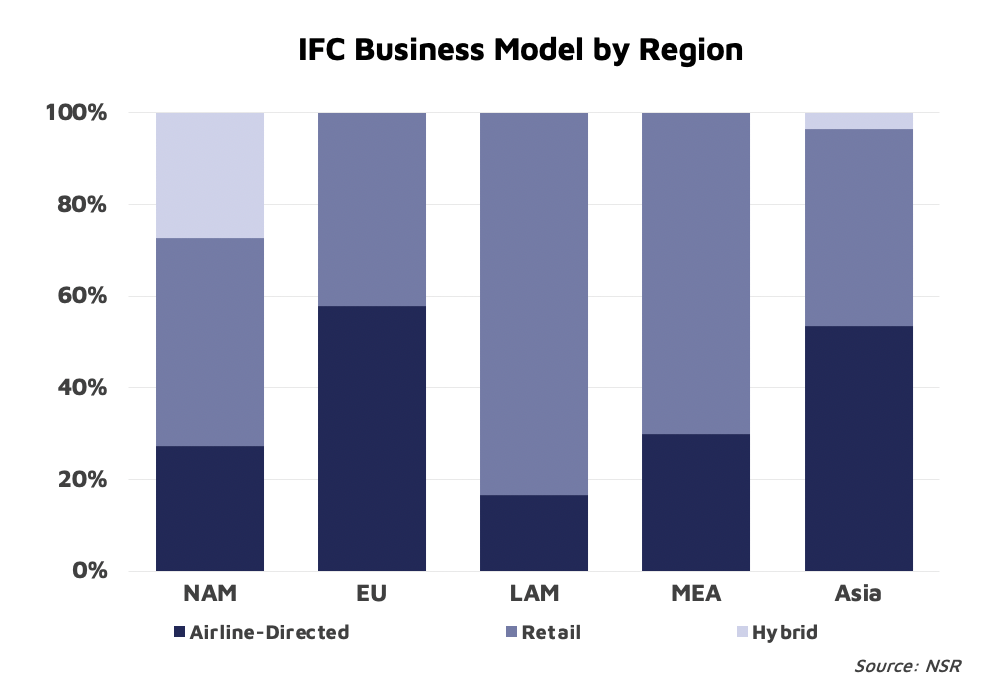 Unlike the historical business models dependent on $ per megabyte, when airlines have the option to “eat-all-you-can” capacity, it opens up opportunities for optimizing various elements of the onboard Wi-Fi experience to offset Wi-Fi costs. This optimization could give way for ad-supported user portals, sponsored content and other partner deals. For example, American Airlines recently announced free 30-minute access to video platform Tiktok for passengers on Viasat-equipped narrowbody airplanes.

It is not a surprise that the earliest partners of free Wi-Fi onboard are audio and video streaming platforms. Content streaming is a natural fit to consumer habits onboard airplanes, which creates a potential playing field for streaming platform giants to hustle customer loyalty. But, most importantly, it creates a pathway to the potential enterprise market for video streaming players to eliminate decades-old static IFE content, only if onboard Wi-Fi becomes highspeed and reliably. As a result, no streaming player wants to be left out in pioneering the free Wi-Fi experience – starting with the Amazon and JetBlue partnership that allowed passengers to stream Prime content for free. Similar sponsorships have emerged since the Amazon and JetBlue deal. One of such being the tripartite deal between Australia-based Qantas and three sponsors: Foxtel, Netflix and Spotify.

To achieve widespread free Wi-Fi service discussed within the industry over the past five years, customers must have a quality Wi-Fi experience at an affordable cost for airlines. The impediment to free Wi-Fi has mainly been self-inflicted by poor and expensive service arising from limited capacity supply. However, with the supply problems expected to be fixed over the next 3-5 years, alongside intense competition from LEO constellation operators, NSR expects the quality of service to improve and the monthly recurring cost (MRC) to come down considerably low, of which free Wi-Fi onboard will become feasible for many airlines. Also, quality Wi-Fi experience will accelerate the growth of sponsorship deals from streaming platform players to social media players as early partners. Other sponsors will come from the travel experience industry, including hotels and gambling institutions.