To be clear, I’m a Space enthusiast, and that makes writing some of the following lines a bit more difficult. The Satellite Communications industry must acknowledge that satellites are no longer the stars of the industry. In the era of cheap and easy access to Space, satellites can’t be the key differentiator. The attention should shift towards services, networking and eventually applications. How is this slide of value creation taking shape? 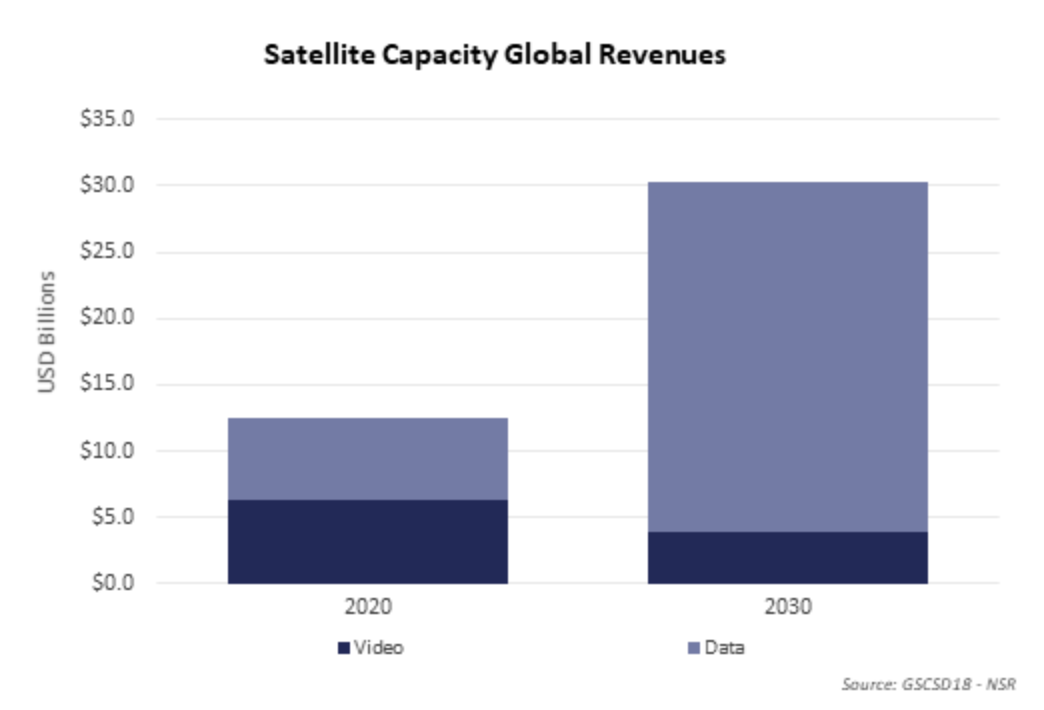 Don’t get me wrong, the Satcom industry has a bright future ahead. In fact, NSR’s Global Satellite Capacity Supply and Demand, 18th Edition (GSCSD18) report forecasts capacity revenues to climb at 9.3% CAGR over the next 10 years. But to capture a portion of this opportunity, actors must adapt their roles and Business Models to the new technology trends, as well as customers’ expectations.

2021 will mark a major milestone for the Satcom industry. For the first time, Data use cases (Consumer Broadband, Backhaul, Mobility, etc.) will generate more revenues than Video. Broadcasting revenues will continue its progressive demise given the pressures from terrestrial alternatives both at the distribution layer (Cloud and fiber) and at the end-user level (OTT). The multicast advantage of GEO satellites, or put it in another way, the ‘Real Estate’ value of the orbital positions, will inevitably go down.

For data verticals, it is also getting harder to differentiate at the capacity level. Not only are abundant supply, upcoming satellite launches, and lower customer stickiness putting pressure on raw bandwidth pricing, but easier access to Space and emergence of new Business Models, such as ‘Infrastructure-as-a-Service’, are facilitating large service providers to acquire their own capacity (Anuvu/Astranis MicroGEO Satellite Constellation). This trend could go even further, and large Satcom customers such as Telcos could consider acquiring their own satellites, leveraging easier access to Space. Technology or Know-how are no longer insurmountable barriers, it’s a matter of strategy and resource allocation priorities.

Value generation is pivoting from infrastructure to a “servicification” of this infrastructure. Multiple satellite operators have started the journey to develop vertical solutions via acquisitions (Intelsat/Gogo, Spacecom/NuRAN) or organic investments (AsiaSat being the latest regional operator to develop a service for the maritime sector). While for some use cases and regions it might make sense to develop a vertical solution, for other applications and network elements – lack of scale, competition, or existence of capable service providers – would make operators better off developing “Platform-as-a-Service” business models.

Some operators have read this very well and started investing in the required virtualization technologies and service orchestration engines. The recent Inmarsat announcement (ORCHESTRA) generated a lot of hype around the LEO plans, but the true focus is on the seamless orchestration of different network layers (L-Band, GX, Terrestrial 5G, and eventually LEO – although plans still seem to be on early stages). Similarly, recent Intelsat Press Releases, such as the latest deal with GCI, put the highlight on Intelsat “deploying a 5G-enabled network, providing seamless compatibility with the terrestrial broadband ecosystem and public and private cloud systems”.

Based on these “Satellite Platform-as-a-Service” Business Models, integrators and even sophisticated customers (Telcos, Airlines, Cruise Lines, etc.) could seamlessly integrate satellite infrastructure in their own workflows and create customized applications.

While some of the Hyperscalers like AWS, Azure, and Google Cloud started to make inroads into the Space industry, their role will only expand in the future following the current technology and value chain trends.

On one side, virtualization of network functions will provide important scale, flexibility, integrability and cost advantages. Many of these functions will be hosted by hyperscalers, such as SES’ ONAP-based service orchestration platform powered by Amdocs hosted on Microsoft Azure. On the other side, connectivity is as useful as the applications and services deriving from it. And hyperscalers already manage most of this content. It is not surprising then that Satellite Operators want to offer preferential roads to these capabilities as a value added to their networks, while Hyperscalers seek to reach new locations, customers and use cases based on coverage beyond terrestrial networks. Partnerships like SES with Microsoft Azure and AWS or Starlink with Google Cloud and Microsoft Azure exemplifies this symbiotic relation.

Factors such as virtualization, abundant supply and cheap and easy access to Space have a profound effect on Satcom’s value chain. The infrastructure business was once very profitable, but margins are moving to other layers of the ecosystem.

Targeted services (where it makes sense) and transforming capacity offerings into a Satellite Platform-as-a-Service kind of Business Model are key to avoid commoditization. Satellite must be very easy to adopt for Telcos and other key customers to integrate satellite connectivity into their own networks. Standardized service orchestration based on 5G is the obvious choice.

Virtualization of network functions and applications based on the Cloud will trigger the rise of Hyperscalers as the next big actors in the Satcom ecosystem.