The linear TV market, comprising DTH and Video Distribution, remains the greatest revenue driver of the satellite industry.  This will not change in the foreseeable future, although high growth rates of the past are more or less over. Seemingly perpetual growth is making way for longer term stability globally in terms of capacity leased.

The 12,000 new channels NSR projects globally by 2026 will be dominated by growth in developing regions, most notably South American DTH with channel growth of 3.8% and Sub-Saharan Africa with 4% annual growth, with the latter offering potential upsides as country-level platforms become more prevalent. Despite such strong channel growth, satellite capacity demand requirements will not grow as fast in the long term, due to an acceleration in the use of better compression technologies moving forward, which has the potential to impact the satellite industry as a whole. In NSR’s recently released Linear TV via Satellite, 9th Edition, NSR forecasts capacity leased for DTH and Video Distribution on C- and Ku-band will increase from 3,325 TPEs in 2016 to 3,528 TPEs in 2026, peaking in 2023 at 3,539 TPEs. This is a flat market but one with a very high market base. 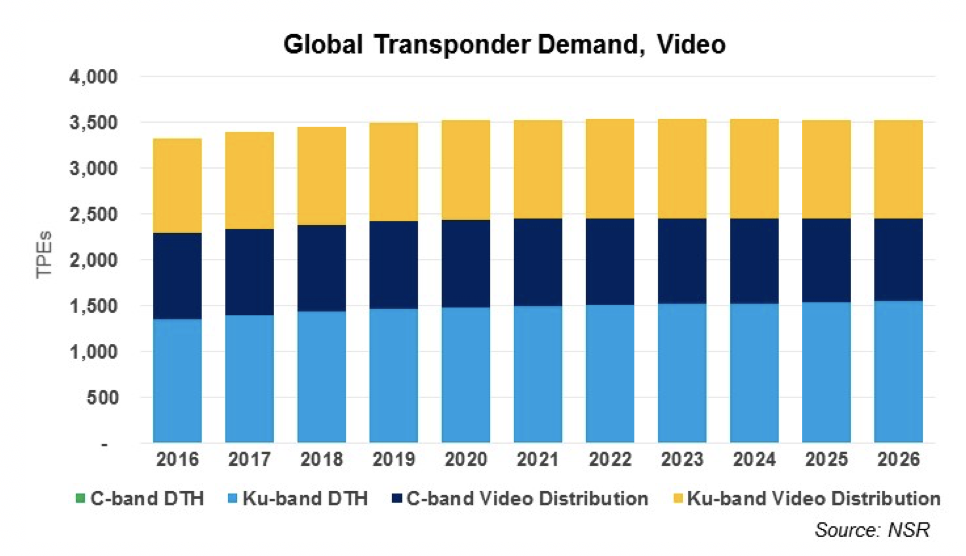 Further, as OTT impacts the bottom lines of video platforms in some regions with lower subscriber growth rates, and cord-cutting being a threat particularly in markets such as North America, platforms and content distributors are looking at ways to reduce cost of their service that are not perceived by the end user. Reducing capacity costs through compression is one of the core ways this will be achieved.

Traditionally the talk of the more efficient HEVC codec (High Efficiency Video Coding), currently the gold standard for low bandwidth video, has revolved around the introduction of UltraHD channels. This enables satellite operators to load 3-4 UltraHD channels on a single transponder, and many more for SD and HD. However, moving forward NSR expects the migration of SD and HD channels to HEVC compression from MPEG-4, and in many cases, from the even less efficient MPEG-2. Doing so could reduce capacity requirements by more than 40% in one swoop, and should a large number of platforms make the switch, there would be huge impacts financially for satellite operators, with lower levels of capacity demand and leasing revenue growth from video.

The Video Distribution side (to cable and IPTV headends) is where the majority of increasing compression will occur. This trend is due to the expected headend technology upgrade that platforms will undertake to support this compression when lease agreements are either renewed, or a de-escalation clause is triggered. Some levels of headend consolidation will also contribute to flattening growth longer term.  DVB-S2X would then be implemented to achieve further efficiencies in channel transmission.

However, only a subset of platforms is expected to make the switch in the next 10 years. This will depend upon such factors as the number of headends picking up a video feed, and the number of channels per platform. Nonetheless, such compression increases are already being felt by operators, including by the MPEG 2 to MPEG4 switchover. On Ku-band Video Distribution 54% of channels still use MPEG-2, compared to 43% on C-band, indicating there is significant room for platforms to migrate to more efficient technologies. NSR expects HEVC implementation to accelerate migration, as platforms look to cut costs and optimize operations in an environment with increasing competition from non-linear video sources.

On the DTH side, however, there will be limited impact. Generally speaking, the cost of upgrading set top boxes to handle HEVC compression will be prohibitive compared to the cost savings for DTH platforms. The greater cost of HEVC compatible set top boxes will mean that its implementation will generally be reserved to higher ARPU 4K/UltraHD subscribers, in which the codec is necessary to broadcast the format. Should subscription to UltraHD content (and thus HEVC compatible set top boxes) become widespread, platforms could upgrade all of their feeds to HEVC. However, given the relatively slow rate of adoption of UltraHD subscriptions, such a major change would not become widespread for well over 10 years.

The ‘golden goose’ of video will continue to remain alive long-term; however, capacity growth will be limited in the medium-term as Cable TV and IPTV platforms turn to HEVC to reduce costs. Increasing compression is not going away, and there are limited ways that satellite operators can slow this trend – it will be critical for operators to take into account accelerating levels of compression in long-term strategic planning. In developed regions, the growth of high bandwidth UltraHD provides a silver lining in countries dogged by flat growth in channel broadcasts. In the mean time, the greatest growth opportunities will be in emerging markets, driving channel growth and the addition of new platforms – which will remain fundamental no matter what kinds of compression are implemented.