India with its population of 1.38B and just over 600M internet users showcases the largest telecom opportunity in an unserved market. That this state exists even after a new entrant in Jio brought more than 300M new users online in past 4 years is a testament to the massive opportunity in India. Inevitably Satcom is expected to play a large role in filling the connectivity gap – especially in cases of medium-term requirements of backhaul and community and D2C broadband. And then there are cases of Aero, Maritime and Government/Military – that only satellite connectivity can fulfil.

NSR pegs this opportunity at more than $12B in cumulative revenues for India and the rest of South Asia in the next 10 years in its Global Satellite Capacity Supply and Demand, 17th Edition report, forecasting a 53% CAGR for GEO-HTS growth in the region towards data segments. The question remains – can India Inc and peers harness this massive untapped potential? The answer might not be straightforward. 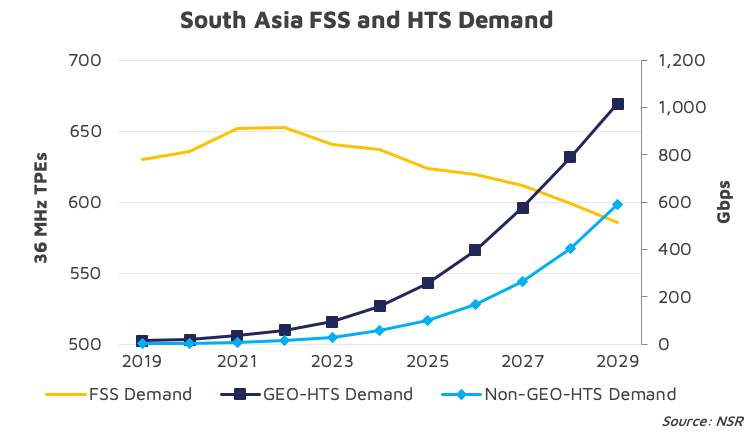 Exhibit A: Growth forecast for South Asia as depicted in NSR’s Global Satellite Capacity Supply and Demand, 17th Edition. With the right policy, this growth could further take off.

To get an answer, we need to deep dive into the pool of challenges:

Satcom growth in India has faced its challenges from a closed/gated system, where free market forces could not enable business the way it happened in Latin America or South East Asia. Post its inception with INSAT 1B launch in 1983, much of the focus until recently in India was around cable, DTH, niche corporate VSAT, banking (ATM branches) connectivity and trunking solutions. With open-sky C-band but ISRO regulating Ku-band as a gateway provider of capacity, opportunities have been limited. Factors such as delayed supply by ISRO, Ka-band uncertainty, long contracting procedures for private players for Ku-band capacity, and delays in service provider licenses have stunted the next ‘broadband growth’ in India.

However, recent regulatory updates by India have renewed faith in its growth story!

While manufacturing of both space and ground systems attracts private players, and partnership with Service Providers and Telco should unlock key growth segments in backhaul, consumer broadband and aero, concerns remain.

With a timely push in policy (with a Government that is pro-business), level playing field and right local partnerships, high double-digit satcom growth is very much a reality with an HTS capacity capturable opportunity of ~1.3 Tbps, as video segments stabilize due to market saturation. And while ISRO is expected to lead the charge with an 80 Gbps GSAT-20 launch end of July, fulfilling the total demand requires a massive contribution from the commercial industry, akin to NASA’s policies in the U.S.

Both domestic and international players could reap in verticals such as:

The wild card could be Bharti Group’s deal taking 45% stake in OneWeb that could be pitched to Indian Government as a secure military network, while also having the option to use OneWeb as a backhaul backbone for Airtel India and Airtel Africa and increase top-line. This would also enable Bharti to provide end-to-end solutions in a country, where local service provider partnerships would be key for any other satellite operator, thus further driving economies of scale.

India’s satcom growth story is still nascent and historically been marred with delays in commercialization policy. Though, with the sector finally opening to manufacturing and service provisioning, large bets await the Indian market in sectors such as backhaul, consumer broadband, mobility and Government/Military as both Indian and foreign players foresee positive market forces. The latent demand is exponential, though creating a level playing field for private players is a must to capture the ~1.3 Tbps potential and fulfil the dream of rural connectivity in India. The right hand-holding by the Government could see the rise of the next satcom leader from India in the APAC region.