Home > The Bottom Line > Will Launch Delays and Failure Slow Down?

Will Launch Delays and Failure Slow Down?

January 10, 2023 by Dafni Christodoulopoulou | More from this Analyst | Profile

Launch delays and failures are common in the space industry, dating back to Explorer 1 in 1958, the initial U.S. satellite, which had been delayed due to weather conditions. One would think that the number of delays and failures would decrease as technology evolves and players gain more experience, but this is not the case. Delays and failures continue to impact the launch industry, with Artemis 1 as a prime example being delayed numerous times this last quarter. Launch disruption is so common and challenging that even the Space Force is funding experiments to determine if AI can be a solution.

With several emerging launch players, such as Firefly and Epsilon coming to market, as well as a growing number of orders and technological experiments, it is reasonable to assume that delays will persist. However, the number of delays and failures, in last month alone, has nearly reached last quarter’s number. Given the continued bottleneck of launch and the drive for more satellites to be launched for both commercial and government customers, one has to ask: “Will launch delays increase and how can they be avoided in the future?”

NSR’s Global Satellite Manufacturing & Launch Market, 12th Edition report forecasts $166 B in satellite launch revenues between 2021-2031, averaging $16.6 B annually. Non-GEO satellites constitute the larger proportion of the launch market, generating 87% of total launch revenues over the decade, mostly driven by constellations. In the third quarter of 2022, there were 25 successful launches, and 8 delays. However, just in October, there were 23 launches, 6 delays, and 2 failures. A strong majority were Science & Technology demonstration missions, controlled by government & military operators, representing significant investment in the satellite industry. 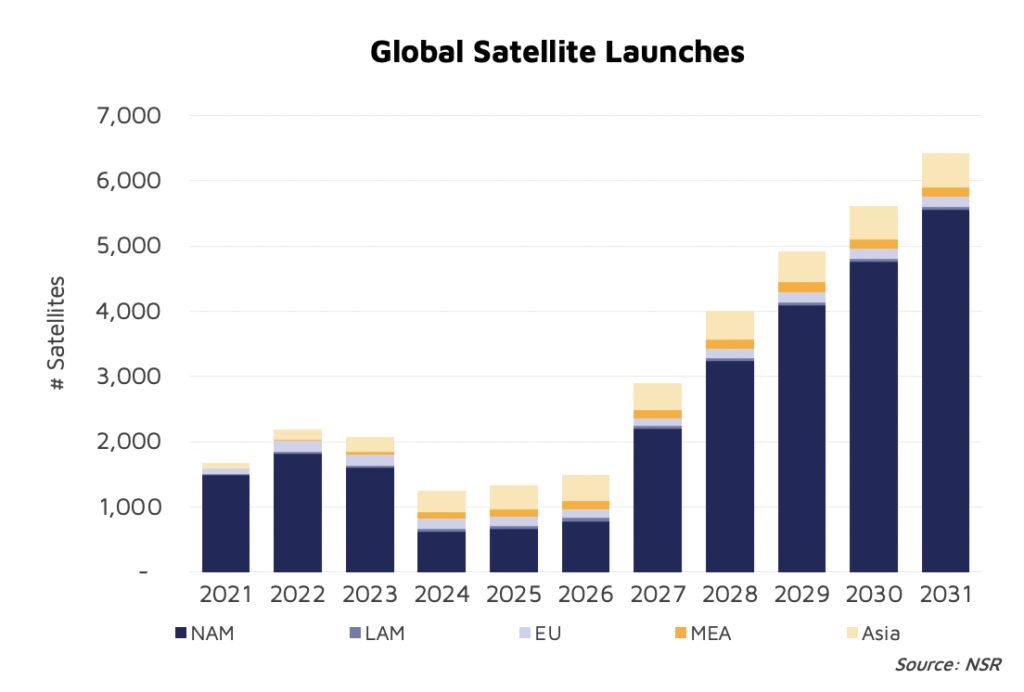 Examining the October 2022 data a bit further, 67% of the delays were for Non-GEO Science missions, some of which included repeated delays for Artemis 1. Given the importance and investment in these missions, operators have a low-risk tolerance, practicing higher caution than other customers. The result is more delays, as any issue will push back launch. However, these delays, necessary or not, have a significant impact on the satellite industry, pushing back start of operation or service, as well as moving to the right large government programs, and risking further delays by compressing later launch availability. NASA’s Psyche mission is a perfect example of multiple delays that caused it to miss both the initial and backup launch windows.

Continuous postponements can also have a significant financial impact on the players. The Starliner’s delays resulted in Boeing taking charges reaching almost $900 M since early 2020, which forced the company to reorganize its Defense, Space and Security business unit and set the first Crew Flight test to no earlier than February 2023.

The two launch failures last month were for Technology Development missions, which often have lower budgets and higher risk tolerances than other verticals. Once again, the customer and mission type can impact the potential for delays, alongside technical problems from the launch itself. 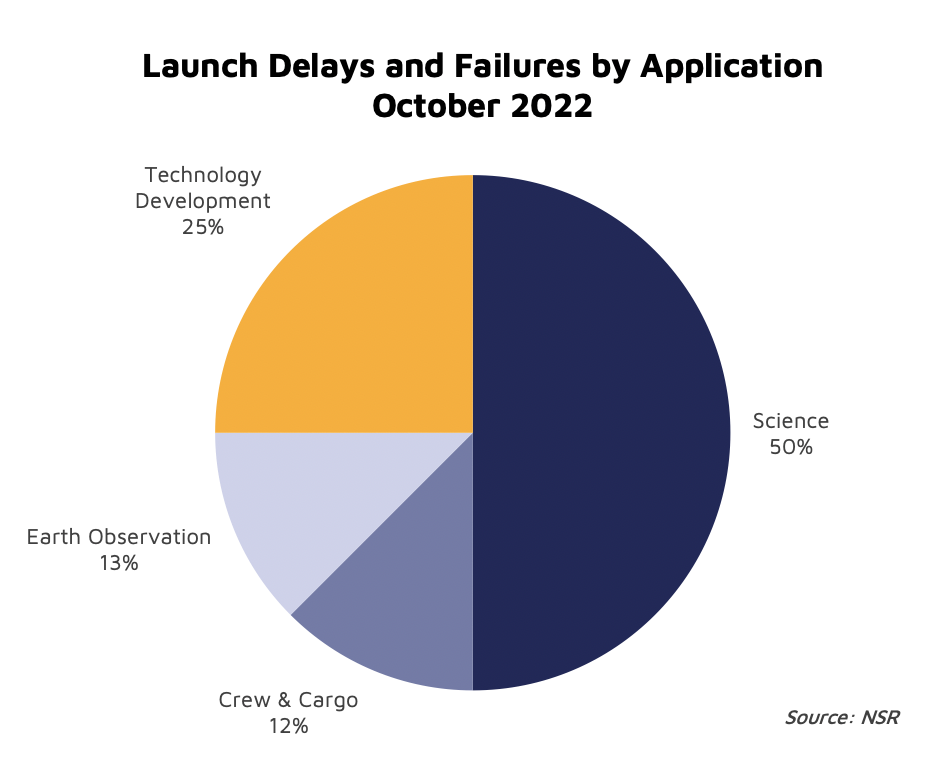 Science & Technology Development missions, like lunar and upcoming Mars mission plans are expected to grow significantly towards the end of the decade, with Artemis 3, meteorology, astronomy and lunar surface key technology development as some of the highlight missions. Science & Technology Development market is forecasted to see over 1,200 satellites launched by 2031, many of which represent high-cost missions of significant scientific importance. Science will continue to be an important vertical for national and international programs, often featuring high cost-per-satellite missions, meaning that launch delays and failures can and will have a more significant impact on the global market.

In October, only a single mission was delayed due to weather conditions, which is an unpredictable and constant force. The majority of the launch delays and failures were caused by technical problems, associated with software issues, limited testing, battery problems, etc. Software issues are somewhat expected in emerging rockets and spacecraft payloads , but at the same time, they are problems easy to identify and avoid in future missions. Moreover, they should be evaluated to reduce similar delays in the future. There were two launch failures also caused by technical problems, as Japan’s Epsilon deviated from its intended trajectory and Firefly’s Alpha was unable to reach its desired orbit.

The last few years, government and commercial players have been racing to launch many satellites to demonstrate their capabilities and prove the reliability of their services. Therefore, untested or limited tested software, like the one seen for the Polaris Dawn mission, can be traced back to the use of emerging launch software and hardware, and/or high-risk emerging launch services. Other software problems might require a more detailed evaluation on top of launch pad availability and priority of other missions to be flown by SpaceX. Plus, the fact that serious training for the 1st commercial spacewalk adds to the uncertainty. But, the importance of a mission needs to also be considered, as capstone scientific ones with a long-estimated lifetime and high cost, are more likely to be delayed to ensure its success, like Artemis 1.

Artemis is part of an ongoing program lasting well into the next decade, with the upcoming mission scheduled to launch in 2024. Therefore, the next Artemis missions are expected to experience a push and pull depending on NASA’s evaluation of the first mission, but it was qualified as “almost perfect”, by its Administrator. On one hand, these delays helped NASA investigate and fix the problem, so they should not happen again and as a result, launches should not be affected by them. On the other hand, the majority of Artemis missions have great importance, are unique and over-engineered, hence NASA is more cautious, and their approach is low tolerance to risk.

Therefore, NASA should evaluate whether delays are acceptable and part of the process or not. They might be necessary for conducting a safe but not on-time mission. If they determine that time is more critical, other options may need to be explored. For example, switching to “more-established” launch service providers (LSP’s) to avoid future problems. But NASA is tied up to SLS to launch Artemis, and hence might not be able to change LSP’s. In that case, the entire Artemis program needs to be aware of likely continued presence of delays and plan accordingly so as to reduce their impact on the entire program.

Other markets may have more options than NASA. They might indeed be able to switch to other LSP’s to avoid future problems. However, every market needs to consider that changes of dates will keep occurring. Therefore, LSP’s investigation of previous delays and failures, and update to their policies and procedures should help eliminate them if they are resulting from the same causes. At the same time, customers should pressure LSP’s on taking measurements to minimise delays and failures. If, for example, they think a more competing launch supply is needed, then new vehicles should be tested. But that means that delays and failures will be more likely to occur.

Launch delays and failures have been part of the space industry since its earliest days and they will continue to play a key role in the speed at which the development of this market occurs. But customers should learn from missions like Artemis. If LSP’s investigate previous delays and failures and update their policies and procedures to eliminate those resulting from the same causes, the rate of delays is expected to decrease within the next decade. It is also, crucial to understand that the Science & Technology Development vertical might experience more delays and failures than other verticals, due to their importance and cost.

Even though the number of launch delays and failures depends on the vertical of the missions, each customer needs to determine whether time or performance is most important, need to be aware of those delays and plan their missions accordingly or switch providers to avoid them.