Home > The Bottom Line > Will LEOs Create a Trillion-Dollar Industry?

Will LEOs Create a Trillion-Dollar Industry?

The Space industry is progressively attracting more interest from the investment community. In fact, investment banks including Morgan Stanley, Goldman Sachs and Bank of America Merrill Lynch expect the Space industry to grow to over $1 trillion by 2040. Expectations from private investors are not far behind, Jeff Bezos justified the investment in the Kuiper constellation based on the potential for it to “move the needle” for Amazon, a company generating annual revenues of $233 billion USD. Is the addressable market big enough to support these projections? 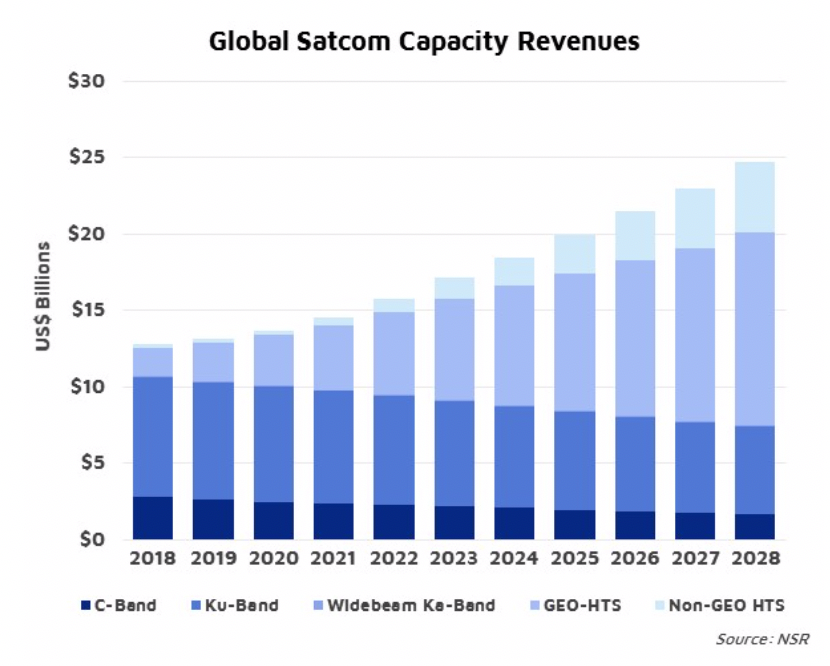 The satellite communications industry and its derived applications (DTH, Consumer Broadband, Backhaul, Mobility, etc.) has historically been a big portion of Space revenues and would need to contribute to future growth to reach those market potentials. According to NSR’s Global Satellite Capacity Supply and Demand, 16th Edition report, Satcom wholesale capacity revenues will reach $24.7 Billion by 2028. Assuming the same 6.8% CAGR as in the 2018-2028 period, the industry would generate $54.5 Billion annually by 2040.  Even adding in elements such as satellite manufacturing, launch and ground equipment, the total is a good distance from the $1 trillion projection.  Given this, are there any hidden use case that could boost the industry to a trillion-dollar Space economy?

The Expectations from the Investment Community

As per Morgan Stanley, the main source for growth for the Space industry, apart from Second Order Impacts, will be Broadband. The investment bank expects the vertical to become a $95 billion market by 2040, growing from somewhere in the neighborhood of $2 billion today. While NSR agrees on the fact that many Satellite Broadband use cases are still underpenetrated today, stimulating demand has not been easy and sustaining high growth rates over decades could exhaust the addressable market. 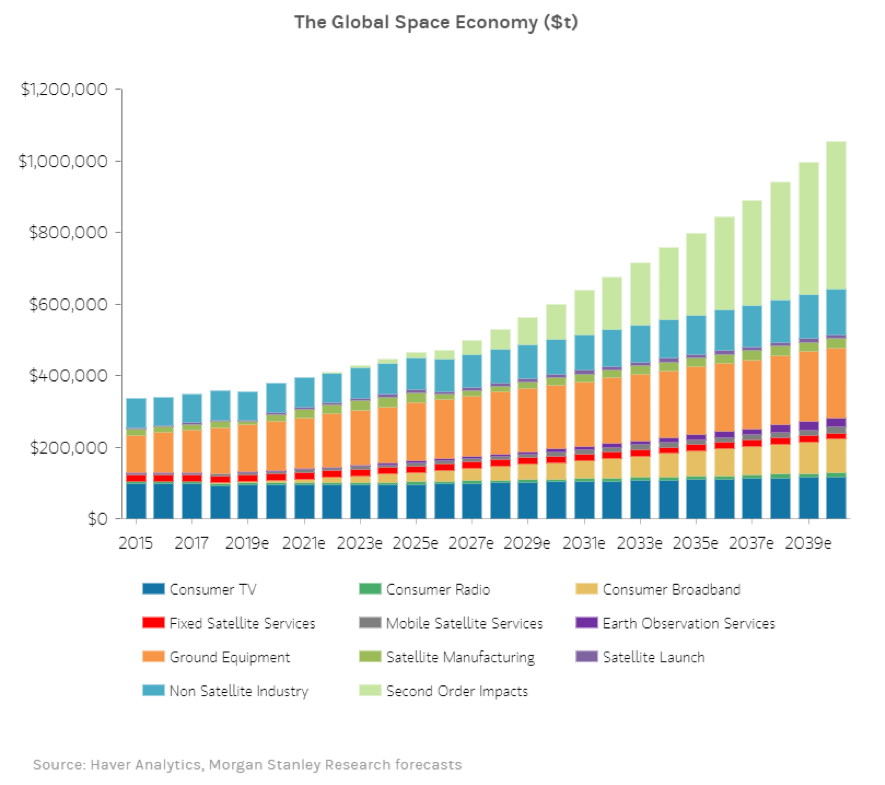 Connecting the Other Half. Really?

“Connecting the other half of the population” referencing to the fact that 50% of the population remains unconnected is a recurrent motto within the satellite industry. However, NSR believes the addressable market is significantly smaller. The Broadband coverage gap “only” represented 10% of the world population according to GSMA. When one also weights in other factors such as available income or digital skills, the potential market for Satcom can be defined realistically. 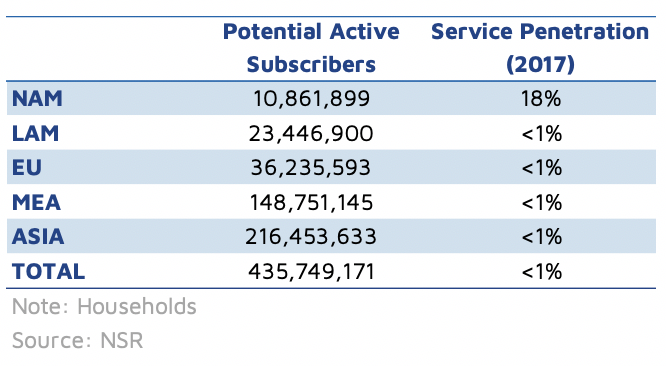 Based on estimates developed on NSR’s VBSM17 report, the addressable market for Satellite Consumer Broadband accounts for 435M households. Service penetration outside North America is still at minimal levels, and NSR projects solid growth coming from this vertical. However, one must bear in mind that revenues per user extracted in emerging markets will be significantly smaller than the $84.26 ARPU that ViaSat realizes in the U.S., and NSR estimates a global average ARPU (considering users connecting through Wi-Fi aggregation points) in the neighborhood of ~20 USD by 2028. This yields a total market potential of $104 billion. This is the theoretical roof of the market, but NSR considers the realistic opportunity to be smaller than that given existing challenges such as the “usage gap”, the difficulties in creating distribution channels or competition from alternative technologies.

It Is Not (Only) About the Bandwidth

No one can deny how impactful digital inclusion is to enhance the economy and wellbeing, from better education and healthcare to more efficient companies and greater market opportunities. An important concept is sometimes referred to as “digital spillover”, when technology accelerates knowledge transfer, business innovation, and performance to achieve a sustainable development and economic impact. Huawei estimated the digital spillover to have an impact on the GDP x2.5 times larger than the actual investment in digital assets. In fact, Morgan Stanley estimates that over $400 billion from their $1 trillion Space-economy from 2040 will come from “Second Order Impacts”.

NSR acknowledges that there are multiple use cases that could be enabled by Satellite connectivity. For example, as observed in BDAvS3 report, satellite big data could generate $17.7 billion in 10-year cumulative revenues by 2028. Consequently, it won’t come as a big surprise that the big supporters of LEO constellations are at the same time strongly positioned to capture opportunities in these “Second Order Impacts”. From connecting Self-driving cars, delivering truly ubiquitous cloud services or enhancing communications cybersecurity, actors like Softbank, Google or Amazon could greatly benefit from seeing LEO constellations become operational. Some established actors are anticipating this transition and trying to capture a portion of these additional revenues, for example SES forging a collaboration with IBM Cloud.

From a thriving startup ecosystem to ultra-rich individuals investing in the industry or investment bankers valuing the Space economy in trillions of dollars, Space is increasingly enticing for investors. However, one must not be carried away by Silicon Valley dreamers and do a balanced analysis of the market opportunity.

Markets like Consumer Broadband have created enormous expectations but, while it is true that the addressable market is massive and the opportunity is still largely untapped, stimulating demand presents its own challenges and NSR is more cautious projecting the growth of the vertical estimating revenues in $17.3 Billion by 2027, or what is the same, 16.6% market penetration over Total Addressable Market.

While raw bandwidth is being commoditized, our increased dependence on digital technologies is opening (in parallel) sizable opportunities for value added services. In fact, the big investors behind LEO constellations are very well positioned to benefit from these second order impacts of ubiquitous connectivity.