Home > The Bottom Line > Will the Moon Have to Wait?

Will the Moon Have to Wait?

NASA and partner space faring nations around the globe are ambitiously focusing on returning to the Moon. Although, getting to the Moon has become harder due to expensive budgetary requirements, NASA is aiming to overcome the traditional barriers of procurement by enabling commercial companies to provide services via its public-private partnerships model, the Commercial Lunar Payload Services (CLPS) program. Currently, major programs to the Moon are increasingly coming under scrutiny and there are doubts if they will be able to meet the original planned timelines. The question on everyone’s mind then is: Will getting to Moon be delayed or continue as planned? 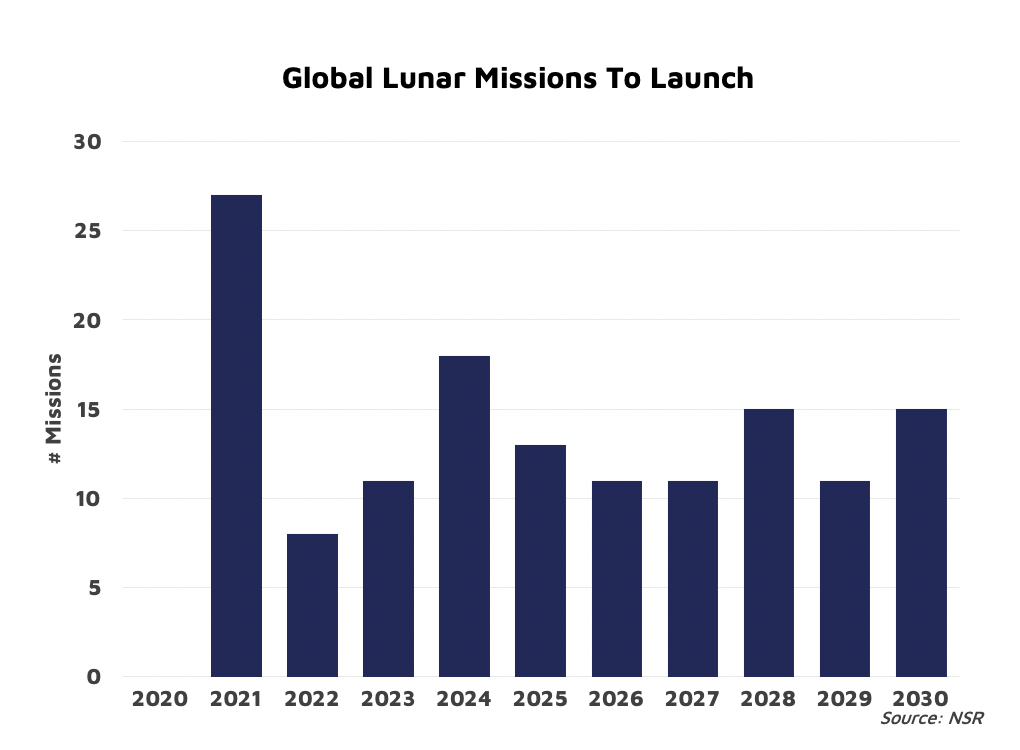 NSR’s Moon Markets Analysis (MMA) report forecasts over 60 lunar missions to launch before 2024, so in other words, from now to then, just over fifteen missions (on average) every year should make it to the Moon.

On Track Despite Changes

NASA is still officially planning to land humans on the moon as part of the Artemis program in 2024, and today, there are no signs of change in policy or timeline in the short term, which was a question market when the new U.S. administration took office.

Initially, transportation, robotics and communication missions are expected to be the pillar to achieve the success of human landing in 2024, on top of relying on existing terrestrial and space infrastructure with over $17.6 B to be spent to achieve this important milestone in lunar program.

However, at this time, 3 out of 6 CLPS awardees have publicly announced that delays are expected to accomplish the mission of getting payloads to the moon. The most recent being Masten Space System, which follows Intuitive Machines announcing slips in the project timeline and Astrobotic’s Peregrine lunar lander falling behind due to ULA’s Vulcan delayed launch.

The rising number of delays throughout 2021 is an indicator that missions to get humans back to the lunar surface are likely to be pushed to the right. Recently, the U.S. GAO conducted a study to evaluate programs at NASA and found two variables leading to findings of over $7.1 B in cost growth in the Moon and exploration programs. The first, is that Artemis’ program was found to be quite aggressive, especially considering all the new technologies needing to be tested, such as heavy launchers, crew modules, even new spacesuits. The second variable was the inter-dependence between all the above components, requiring a very high degree of coordination and synchronized progress. This comes at a time where effects from COVID-19 have had a rolling impact through the supply chain, amounting to an average of 8-month delay from the original expected schedule for some early CLPS missions.

Work is underway to reduce the number of postponements throughout Lunar programs by identifying key refinement metrics, improving product development practices, and finding alternative solutions to reducing cost. The aim for launching early CLPS missions will still be a priority as the first phase will be to complete the robotic exploration roadmap. But this is likely to cause a slip in the major milestone of 2024 human landing. While NASA and U.S. are experiencing delays in program timelines, ESA and Europe are fighting not to be forgotten in human spaceflight, because most of the programs related to Europeans and other global space faring nations reaching the Lunar surface are encompassed within the Artemis program. This could lead to a domino effect on all players and partners involved in the Artemis program, and the race back to the Moon.

A lot of projects, programs and missions must be in place before the Artemis program can achieve its goal of getting humans to the surface of the Moon in 2024. From Space Launch System to the key missions landing initial experimental payload on the surface – delays in lunar hardware could lead to the overall delay in pushing the lunar human timeline to its previous version of 2026. Time will tell if the Moon must wait a bit longer before seeing new footsteps on its soil.