Home > The Bottom Line > A European Defence System in Space

A European Defence System in Space

September 22, 2017 by Claude Rousseau | More from this Analyst | Profile

The political landscape surrounding the European Union and ever-closer militarization amongst its Member States is a complex and divisive topic. However, public opinion has shifted more favorably towards the idea of sharing some of the burden, especially for those countries that may be too small to invest in programs such as their own military satellite. The European Commission (EC) has therefore taken the opportunity to push forwards its concept of a shared government satellite communications system.

One method to improve space defense for the EU is in utilizing the EU commercial and civilian space assets – Galileo and Copernicus – as dual-purpose programs, acting as resources to support military actions and surveillance purposes. However, the leading goal of the EC is to prepare the next generation of Government Satellite Communications (GOVSATCOM), ensuring cost-effective satellite communication services for critical missions. This programme will be implemented by the EC, the European Defense Agency (EDA), the European External Action Service (EEAS) and the European Space Agency (ESA).

The EDA Steering Board accepted the Outline Description for the (GOVSATCOM) Pooling and Sharing demonstration project, which will look how to pull together governmental capability such as bandwidth/power and services. Airbus was contracted to produce this two-year demonstrator project, leading to a launch of the programme by 2020. Enabled by Newtec modems, in another move by Newtec to get greater presence in the Gov & Mil market, the system will set the groundwork for how the GOVSATCOM program will function. One goal of the demonstrator will be to produce a process of sharing satellite capabilities, and the other to develop a system capable of seamlessly switching users between satellite beams whilst protecting confidentiality.

The countries involved in this first step will be: Austria, Belgium, Estonia, France, Germany, Greece, Italy, Lithuania, Luxembourg, Norway, Poland, Portugal, Spain, Sweden and the United Kingdom. Of these, only six currently have their own defense telecommunications satellites:

All countries except for Sweden and Norway are also contributing members to the EU SatCom Market, which already pools and shares commercial satellite communications services, including for military missions. 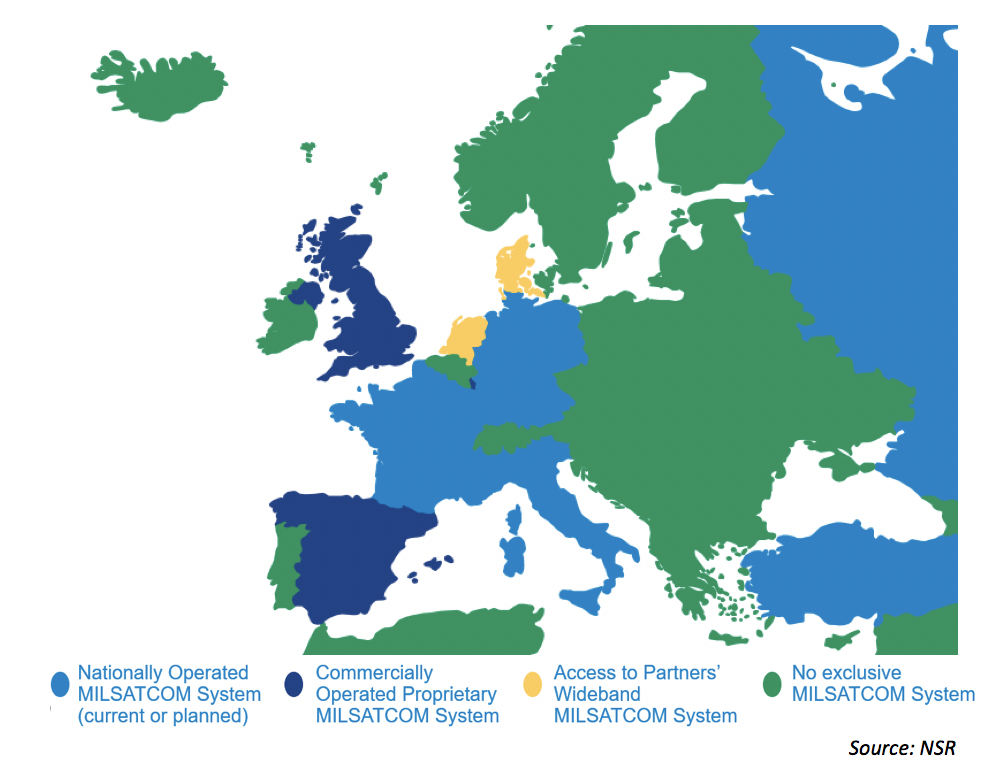 There are several different ways in which the Commission is considering addressing the demand. Firstly, it could utilize competitive market solutions from both private and public system operators, which would enter the demand pool once accredited. It could also pursue forming a Public-Public partnership consortium, or introduce a PPP of accredited private parties and public authorities. Finally, the EC could procure the infrastructure itself. At least the initial stages will focus on communication capabilities provided by commercial and governmental satellites already in orbit.

The next step of the demonstration project will be to establish the Project Arrangement, specifying legal conditions for the programme. However, there are several barriers to overcome if the Commission wishes to implement a significant defense program. It is difficult to predict what impact, if any, the impending “Brexit” will have, and it is also unclear how far EU Member States would allow the civilian programs such as Copernicus to be utilized for defense purposes. There is still resistance towards combined EU military action, and the complexity of a large project such as this means it will take time to clarify a pathway.

Europe has already displayed its desire to move away from relying on non-European systems, and the wish to support competition from within its Member States. The shift towards supporting closer military cooperation, as well as pushing for an autonomous EU-specific space defence system, indicates there could be opportunity for the European market.

The final product of how GovSatCom materializes is still uncertain, but the recent award is one step closer towards realization. Capacity-pooling may be the only sensible path forward; however, relying on commercial operators or funding the building of an EU defense satellite may also occur, or indeed result in a combination of solutions. For now, members of the EU Satcom Market are in the strongest position to answer the demand.