Despite the common notion that Wi-Fi is free, there remain ‘havens’ where it is still a fee-based service.  In-flight connectivity (IFC) is one such market, and recent news shows it will remain a paying service for many passengers as more airlines takes control over it.

Directing connectivity and bandwidth services, with more freedom on setting prices to drive take-up rates (on top of selling perfume and cigarettes onboard) will allow airlines to leverage large IFC CAPEX investments in the coming years.

The benefits should be substantial, as NSR forecasts in its Aeronautical Satcom Markets, 6th Edition that the total satellite connectivity opportunity for IFC will reach $4.7 B in retail revenues annually by 2027 and most of it, roughly $3.8 B, will be generated from commercial passenger markets. Not all of it will go to airlines, but their involvement is likely to provide more reasons to switch over (partially) to a model over which they will have control.

Despite historical single-digit take-up rates for paying IFC service, the question of how to get more users onto the system has bugged airlines and service providers alike for years.  Airlines have suffered from sticker shock on the price of equipping aircraft where hardware alone is the biggest part of the investment; and new HTS equipment increasingly sold to airlines has not reached volumes yet to create lower prices.

But HTS does offer more capacity and addresses many passenger complaints of poor IFC quality and bandwidth, which is a net positive on take rates and the desire of (more) clients to pay for the service going forward. Recent HTS deals also offer airlines significant savings from lower HTS capacity costs.

At the same time, IFC service providers are no longer happy with the ‘legacy’ retail model where they foot the bill for aircraft IFC equipment in exchange for a share of revenues with the airlines.  GoGo, which introduced the model, recently announced it was dropping these giveaways to become profitable by 2020.  Indeed, with 90% of its services revenues in commercial aviation coming from ‘retail’ customers, the main player in the industry is shifting the burden to airlines.

And it seems that it’s the right time. Globally, airline profits are up and in the U.S. in particular,  they recorded the 2nd best year ever in terms of profits in 2017, which means they have capital to invest in elements such as IFC systems.

This also ‘synchs’ well with what NSR noted in its report as a strong trend towards the airline-directed model where airlines want more ‘control over the interface’ with passengers. This supports their objective of better brand recognition and more passenger loyalty via a fully-labelled IFC experience. 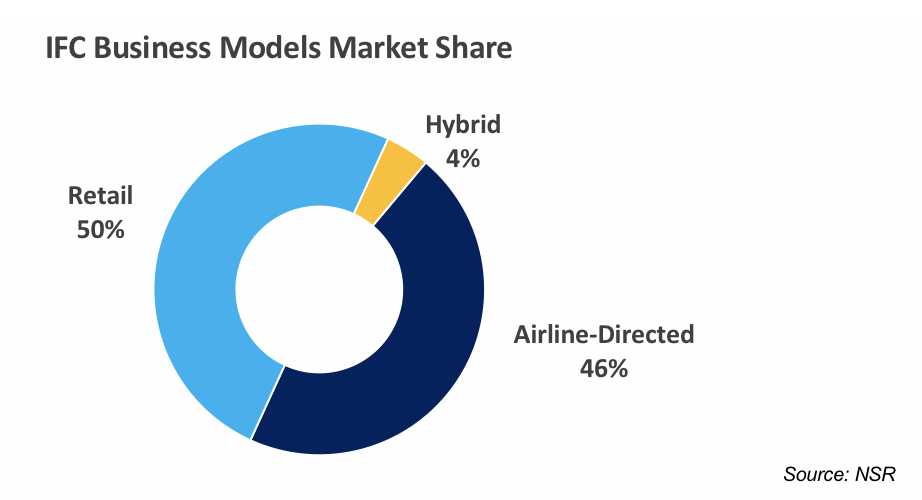 The announcement by Air New Zealand to charge a set IFC fee per flight on its Inmarsat GX-enabled long duration aircraft sets the example of what will likely be a more popular business model going forward. Indeed, the airline confirmed that it was “looking to introduce more purchase options”, while assessing customer demand, satisfaction and pricing options to introduce a variety of ways for customers to pay. As take-up rates increase, this way of ‘tuning’ the model by airlines is expected to gain popularity.

To ‘share the load’ of IFC, airlines are taking more control over the interface where passengers (and sometimes 3rd party third-party payers in the hybrid model) are increasingly tapped to generate revenues. As service providers look to retreat from the expenses of paying for IFC in order to become more profitable, it is likely that the burden of costs will shift to airlines. Now maybe the best time to see airlines taking on more responsibilities for IFC and set their own value on revenues expectations from passengers.