A traditional and leading space actor, the United States heavily emphasizes commercial innovation.  It is therefore no surprise that its commercial space industry is responding to the New Space renaissance with a diverse array of launch initiatives to ease access to orbit. The close runner up in quantity of Smallsat Launchers currently in development, as well as maturity of launch vehicle technology is China, which has seen drastic progress as a rising space power in the last two decades. Coupled with accelerated private sector involvement, it is setting itself up to also lead Smallsat Launch. But does this mean China will dominate this up-and-coming market? 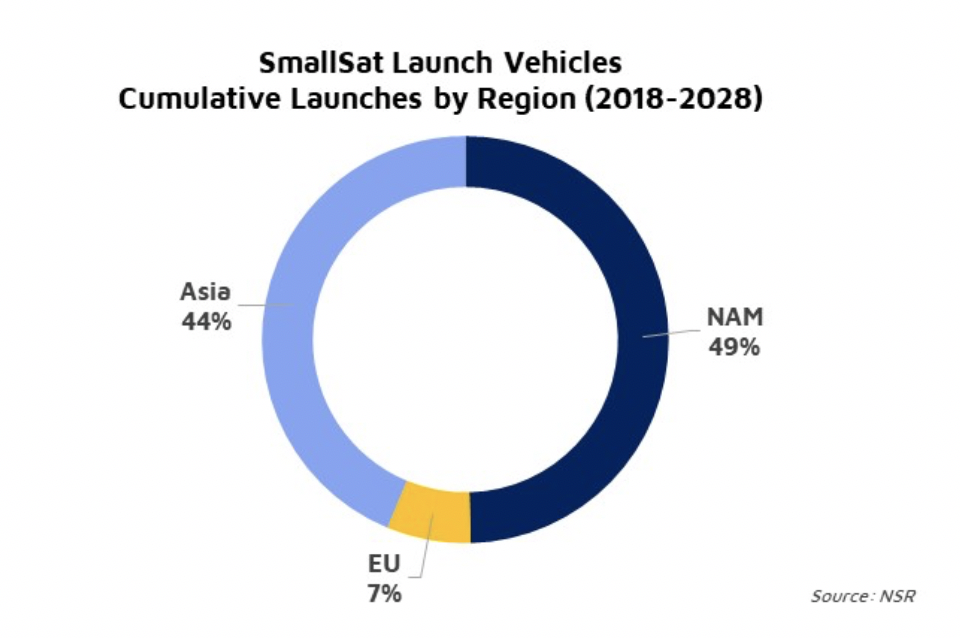 NSR’s Smallsat Launch Vehicle Markets, 2nd Edition (SLVM2) report forecasts North America and Asia will be neck and neck for commercial dedicated small launches by 2028.  China seemingly is already outpacing the United States in pure quantity of dedicated smallsat launches in 2018: of the 9 attempted orbital launches worldwide, only 3 were conducted by a single U.S. provider, compared to 5 attempted launches by multiple Chinese providers. In a high growth scenario by 2028, NSR’s forecasts China contributing significantly to the 44% market share of the Asia region in cumulative total launches, versus 49% for the U.S. (all of North America basically).  As China continues to grow its space program, especially on the launch front, it is important to take stock of the factors that accelerated its development to understand the future potential risks, from both a business and regulatory standpoint.

A recent report by the U.S. Air Force Research Laboratory (AFRL) and the U.S. Defense Innovation Unit (DIU) named China a significant threat to various U.S. interests, more specifically to national security, dominance in space, and open markets by use of subversive tactics and influence. However, one must also consider other influential factors such as China’s goals for space (as codified in its national space policy), and the organizational structure of its industrial base that is tasked with executing that policy.

China’s space industry is led and guided by State-owned and State-administered defense contractors China Aerospace Science and Technology Corporation (CASC) and China Aerospace Science and Industry Corporation (CASIC), although the private industry has picked up momentum recently with close to 100 space startups being established and funded after a policy shift in 2014. Additionally, China’s posture of civilian-military integration facilitates technology transfer to its private sector, and poses a stark contrast to the strategy of the United States. China’s rapid development in launch can be traced back to this civilian-military fusion policy strategy, which is a major advantage of Chinese commercial space actors.

However, one cannot compare companies like Expace, a subsidiary of the defense contractor CASIC, operating on a level playing field to other truly commercial small launch ventures such as Rocket Lab or Vector Launch, even though they will be competing for essentially the same pool of customers on the open market. CASIC (through Expace) is planning to charge 4-5 times below market rate for the launch of small satellites via its Kuaizhou-11 launch vehicle, which will effectively undermine global competition. This pricing is only possible due to Expace’s State-owned CASIC parent company ownership. 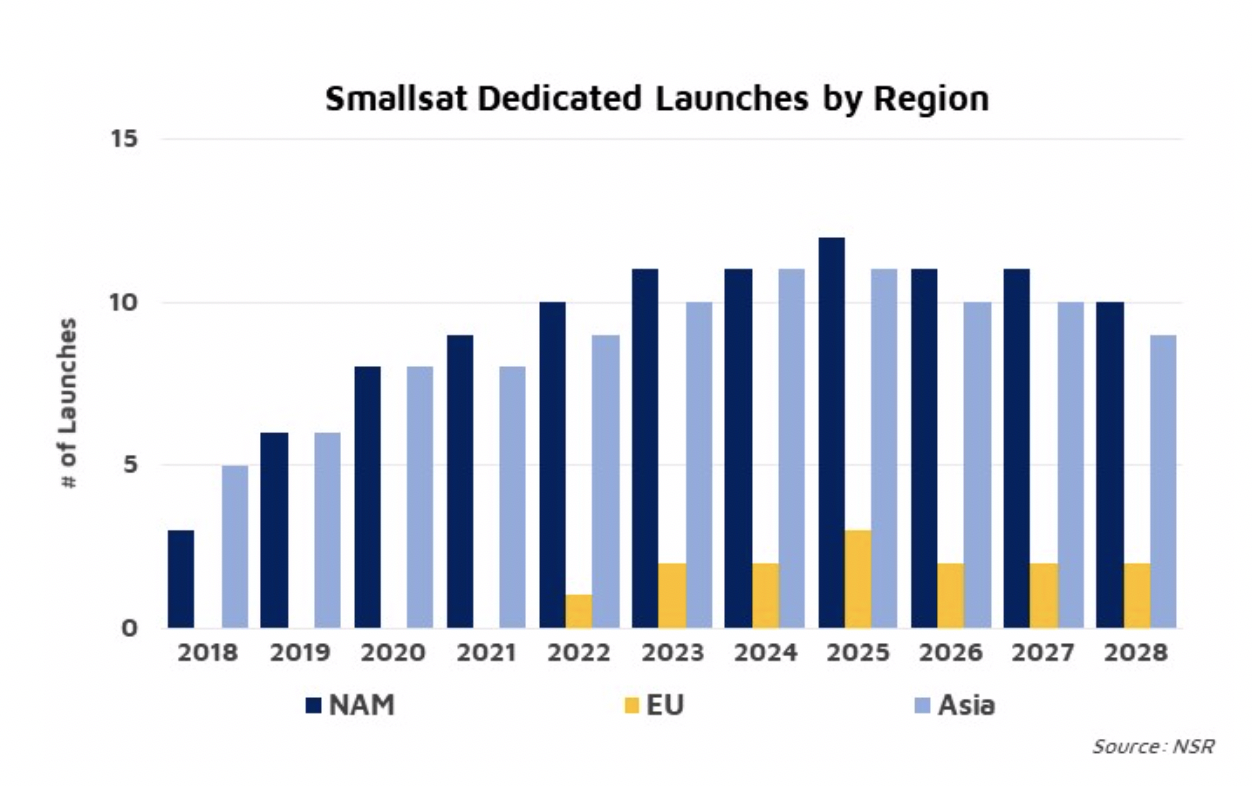 For its part, the North America market shows higher numbers but seems to be outpacing Asia in pure investment. NSR’s analysis shows $1.3B funded the development of 34 dedicated smallsat launch vehicles worldwide over the past 15 years, of which the U.S. received 58%, and China’s share was only 31%.  This is due in part to the quantity of individual launch initiatives, momentum gathered by interest in new launch technology, and availability of funding. And this trend will continue as NSR expects bigger investors to come up with larger sums over time.

However, the long-term survival of dedicated small launchers here and elsewhere depends not just on the potential high launch cadence and funding, but also on closing the business case with customers. This is a huge restraint on China’s potential, since the majority of China’s launch demand is domestic as regulatory barriers and worsening political relations tighten China’s access to worldwide markets. As such, China’s customer base needs to expand in a major way to support the oversupply of launchers and see them survive long-term.

China’s accelerated rise to becoming a formidable space power can be traced back to its unified space strategy and coordinated public-private efforts to dominate the market. The government backing of its “private” space sector effectively blurs the lines and offers an unmistakable advantage to China. However, regulatory barriers and political relations also carry a significant impact on their future viability.

China may be making great headway in ramping up the development and launch cadence of its small launch vehicles, but there is just not enough demand from its current customer base to sustain them. Unless some major changes are made on trade and the regulatory barriers currently in place, China’s planned pricing alone will not be the “end-all, be-all’ to attract customers and dominate this promising market.