Last week, two major constellations operators,  OneWeb and SpaceX, nearly crashed in space, when two of their satellites almost collided.  Another near-miss happened the same day when two other satellites nearly struck each other over the Arctic. And last month, the 2-ton NOAA-17 satellite broke up, sending dangerous debris all along its orbit.  This type of space debris and close calls are becoming too common, especially as more satellites are launched, and space junk, even from decades ago, persists and compounds the problem.

Space Situational Awareness (SSA), the commercialized service of monitoring orbit and warning operators, maybe the best market response to this litter challenge.  Yet, while the risk and opportunity grow daily, the SSA market lags. Fractured coordination, capabilities, offering, and pricing structure, and long-established low priority affected to cleaning up space is such that SSA struggles as any emerging market does with a solid perception that “if it ain’t broke, don’t fix it”.  Furthermore, it presents different views on the danger of debris, and the necessity of its services.  And lastly, it suffers from far smaller funding and budget than is provided to constellations.  However, while constellations may appear crucial, especially to certain investment and bottom lines, SSA is, in fact, crucial to the safe and sustainable use of space to avoid constellations from becoming accidents waiting to happen.

So, why is the SSA market lagging, what impact will that have on the industry, and what can be done to change the situation? 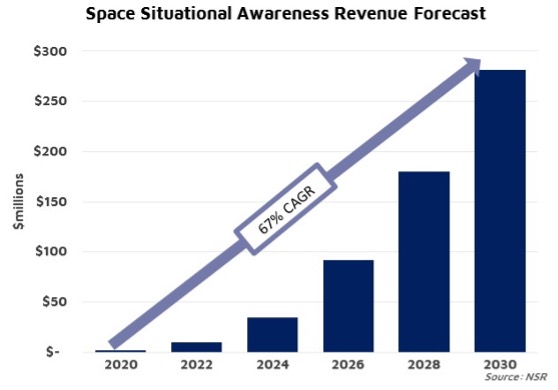 NSR’s In-Orbit Servicing & Space Situational Awareness Markets, 4th Edition (IoSM4) report forecasts SSA services to grow from just $2 million to $282 million in annual revenues between 2020 and 2029.  While that seems impressive, NSR also forecasts that SSA players will only capture 20% of the serviceable addressable market during that time. In other words, out of every 5 high-risk satellites operating over the next decade, only 1 will be actively monitored and tracked, with warnings provided to its operator by a commercial provider. 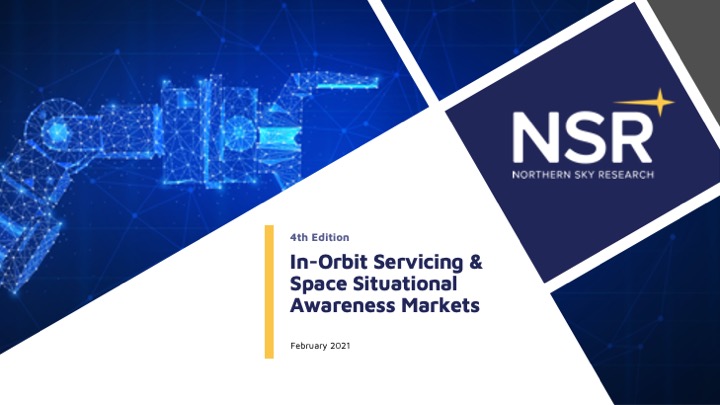 Competition with government programs is one reason behind this trend. Increased funding and development of programs, such as the U.S. Space Fence, JAXA’s SSA, and the EU Space Surveillance & Traffic (EUSST) will challenge the commercial market through the capabilities and services offered. Additionally, the issues of dual-use, and splitting between classified and non-classified data, muddy the water and are expected to limit the commercial play. However, given the high-strategic value of the assets, government and military customers are still expected to drive commercial SSA market revenues, at 53% of the cumulative opportunity over the decade, 95% of which will be for non-GEO satellites. 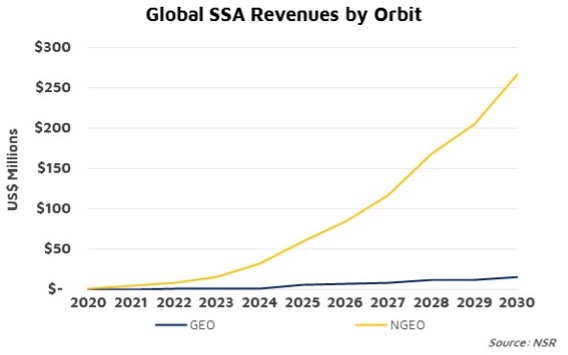 While growing government programs will bring greater monitoring capability, a severe lack of coordination and fragmentation of performance hold the SSA market back, at best, and spell disaster for operators in the worst case.

Take the OneWeb/Starlink near-collision. According to one report, Space Force alerted OneWeb, who then contacted Starlink to quickly create a mitigation plan. For a reason yet unknown outside of SpaceX, the company turned off its automated collision avoidance system, allowing OneWeb to take full control of the situation by maneuvering their satellite away. There was no pre-arranged plan, and coordination was handled last minute.

There is no central governing authority for SSA or satellite collision avoidance. Licensing regulations remain fragmented, region to region, and underdeveloped, failing to set minimum required capabilities and standards. While it is generally imprudent to fear that the sky is falling, these incidents will continue, in greater frequency, and one day, the worst-case scenarios will unfold, and collisions will happen. In the meantime, late coordination costs money, through reactive avoidance maneuvers, shortening satellite & revenue-generating lifetimes.

There is hope here. Support for SSA coordination has grown, such as through statements made recently by the U.S. Space Command who support setting international “rules of behavior in space”. At the same time, projects like IBM’s SSA, and Imagine LAB’s Eyes on the Sky projects are aiming to crowdsource and coordinate the development of SSA data and monitoring capabilities. In the commercial sector, partnerships such as between LeoLabs and SpaceX serve to support and improve the development of SSA services.

Space is full of junk. Debris, defunct satellites and other objects like rocket bodies as far back as from the first few rocket launches remain a danger in orbit. With constellations continuing to drive the market, the chances of collision will only increase. Space Situational Awareness is necessary for monitoring and warning against this risk, yet the capabilities and market remain significantly fragmented and underdeveloped. Coordination, collaboration, and setting stronger standards for collision avoidance will be necessary to move this market forward. Otherwise, collisions, not constellations, will be the main market outcome.