January 10, 2023 by Dallas Kasaboski | More from this Analyst | Profile

Direct-to-device made a huge splash in satellite last year. First, with Starlink’s partnership with T-Mobile to expand coverage through its 2nd generation constellation. Apple followed not long after, investing $450 million into a similar deal with Globalstar. AST Space Mobile’s BlueWalker-3 satellite launched, unfolding its 700 square foot antenna to test technologies for an upcoming constellation, and Saturn Satellite Networks partnered with CesiumAstro for phased array antennas for its own constellation.

The gap between satellite and the ground is narrowing, with direct-to-device being the latest, possibly greatest, opportunity in the sector. Enabling this opportunity are business decisions and strategies, of course, from telcos & MNOs, seeking to expand coverage and create new revenue streams. However, on the technology side, the enabling driver has been the “software-ification” of satellites.

Software-defined satellites are a key technological trend aiming to bring about direct-to-device networks, 5G, small GEOs, and more. The entire satellite manufacturing & launch industry has been working to accommodate the growing trend for high-volume production, lower costs, and standardized offerings.

However, there are limitations to technology’s progress, and the goals of operators & telcos may not directly align with those of manufacturers & launch service providers. How then, does the future of satellite look, and what impact will software-defined architectures have across the value chain? 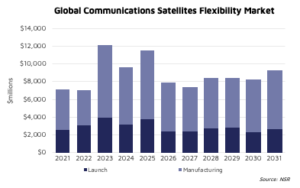 NSR’s Software-Defined Satellites, 2nd Edition report forecasts the revenues associated with the manufacture and launch of all communications satellites to exceed $97 billion, cumulatively, over the next 10 years. Manufacturing provides the largest opportunity, or costs more, depending on your perspective, responsible for 66% of total revenues. Flexible satellites lead, responsible for more than 75% of all revenues. Indeed, satellite has hit a “second wave”, so to speak, which began with constellations and is now moving into software-flexible networks.

Starting over a decade ago, satellite manufacturing & launch needed to evolve to produce and deploy high volumes of satellites. This trend continues, with over a dozen new satellite manufacturing facilities announced, funded, or opened last year, all focused on building constellations. On the launch side, rideshare and dedicated smallsat launch have been the driving trends, lowering prices, increasing launch cadence, and expanding launch service portfolios. 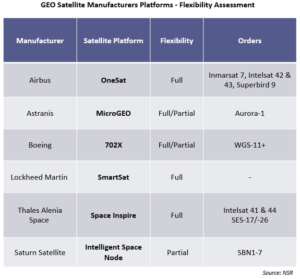 However, to both better facilitate the production of more satellites, and meet growing & changing demand, satellites have had to become more flexible, both in their design and operation. Prime manufacturers, namely Airbus, Boeing, Lockheed Martin, and Thales Alenia Space have unveiled software-defined satellite platforms, aimed at reducing manufacturing costs through the standardization of hardware, but also meet diversifying demand, through the ability to modify a satellite’s mission post-launch. The rising tide of technological progress has also enabled non-prime manufacturers to enter the game, leading to a growing trend of in-house manufacturing among operators. That is, many operators are becoming manufacturers, building their own satellite constellations.

All of this has been done to narrow the gap between satellite and terrestrial connectivity. Constellations began to diversify risk, lower costs, and increase global coverage; why build a single point-of-failure satellite that can cover a continent when one can build several dozen satellites to cover the entire globe at a potentially similar price? At the same time, economies of scale within manufacturing, coupled with rideshare programs for launch, have decreased overall satellite costs, per kilogram and per-mission. Once again, this aims to narrow the gap; satellite capacity, bandwidth, and services have long been much too expensive for the terrestrial market, prices driven up by the high costs of satellite design & deployment.

Direct-to-device follows from the drivers above. If satellites can become cheaper to build and launch, with service prices nearing acceptable terrestrial levels, and provide global coverage, the next step is to be able to go direct. However, direct bandwidth may not be enough; customer demand changes over time and MNO service portfolios are much more diverse than pure connectivity. There are reasons, after all, why the gap has remained between GEO HTS and telcos all these years.

The announcements from Starlink & Globalstar are a demonstration of both the drivers and restraints in the satellite industry. Each deal stands to increase the global coverage of the partnered MNO and provide customer channels for the respective satellite operators. For years, the promise of “bridging the digital divide” has been one of the biggest selling points for satellite constellations and direct-to-device via software-defined satellites looks to be making that dream come true.

Given the bargaining power of telcos, the gap between satellite and the ground could decrease to the point of cutting out operators, with MNOs going direct to manufacturers. This is what inspired the Arturus satellite, via Astranis & Pacific Dataport. On a lesser level, component and satellite redesign is also being influenced by telcos, such as Starlink adding a “direct to cellular system” to the satellites in its upcoming 2nd generation constellation.

However, while the gap is narrowing, these very deals showcase the challenges, opportunities, and niches that will remain. Satellite manufacturing, launch, operation, and network management are still vastly different from terrestrial, and manufacturers, launch service providers, and satellite operators have decades of experience. Rather than telcos fully integrating into the market, NSR believes these deals and those to follow in the near-to-mid-term, will primarily focus on capacity plays for operators, and a means of staying competitive and ubiquitous for telcos; such as Apple aiming to tip market share toward their devices, or the “unnamed partner” siding with Iridium toward theirs.

What Does this Mean for the Satellite Sector?

Demand is growing and changing. In addition, network standardization remains rare, with every modem, router, gateway, and service requiring a different approach. To remain competitive, and to stay relevant, satellites are needing to become more and more flexible, capable of changing their configuration post-launch. Either by steering beams, or changing power & spectrum utilization on board, flexible satellites are in growing demand, with NSR’s report forecasting over 95% of all satellites featuring either full or partial flexibility. In Non-GEO, partial flexibility will be the most dominant, as steerable beams is almost a requirement for such networks, and most operators not willing to invest in more complex satellites with only 5–7-year lifetimes. However, mega constellations, such as Starlink & OneWeb, both launching new batches next week, and more capable to compete, have already announced 2nd generation constellations expected to feature full flexibility via a larger platform. In OneWeb’s case, and players like Amazon Kuiper and others, these higher-mass constellations will also contribute more greatly to launch revenues, with NSR’s report expecting fully flexible systems to dominate Non-GEO launch revenues, 43% or $6 billion over the next decade.

In GEO, flexibility only will control 84% of orders, with traditional, Bent Pipe satellites continuing either in legacy programs, as network linchpins, or especially for emerging space nations. These will generate $41.6 billion in manufacturing & launch revenues over the decade, with manufacturing responsible for 70% of revenues here. While many satellites will remain high-mass, over 4 tons, for longer lifetimes, more capacity & capability, a growing trend here is the development of small GEOs. Dropping to 1,500 kg, or even as low as 400, these small & micro-GEO satellites are enticing operators and service providers alike to the satellite market, though via the trade-off of shorter lifetimes. Cost remains inconsistent to compare, given the high number of early adoption, and dual-use programs in place. However, trendlines are emerging for both fully and partially flexible systems, with prices stabilizing around $61,000 per kg for the former and decreasing to $64,000 for the latter; many fully flexible systems taking advantage of government subsidy resulting in lower mission costs.

Direct-to-device is not hardware play, it is about adding software and services to end-user devices and expanding the reach of telcos and satellite operators. While both hardware and software are a means to an end, the former is expected, more and more, to be standardized, less expensive, and compatible, while the latter remains a driving value proposition across communication networks. Software-defined satellites will be a key component of communication networks, enabling more capable & resilient networks, and continuing to narrow the gap between satellite and terrestrial networks.