October 1, 2019 by Dallas Kasaboski | More from this Analyst | Profile

Last week, 16-year old Greta Thunberg spoke at the United Nations, urging world leaders to take more definitive action against climate change. A week before that, millions of people marched worldwide in an effort to urge the same.

Growing pressure has prompted more proposed legislation and climate plans in recent years, with many sectors of the economy seeking improved supply chain management, monitoring, and ways of cutting their pollution output to better align with the new paradigm. Naturally, given their vantage point, satellites stand as one of the key enabling technologies to assist in these efforts, and it’s not just traditional imagery that is called upon to help assess the damage.

Indeed, typically dominated by optical and radar imagery, one of the most recent, fastest-growing, opportunities in the satellite-based Earth Observation (EO) market does not involve imagery, at all. New technology, rising environmental concern, and a diversifying industry are encouraging the development of non-imagery datasets for climate change monitoring: radio occultation, microwave, and greenhouse gas emissions in particular, are some of the most promising, emerging datasets. 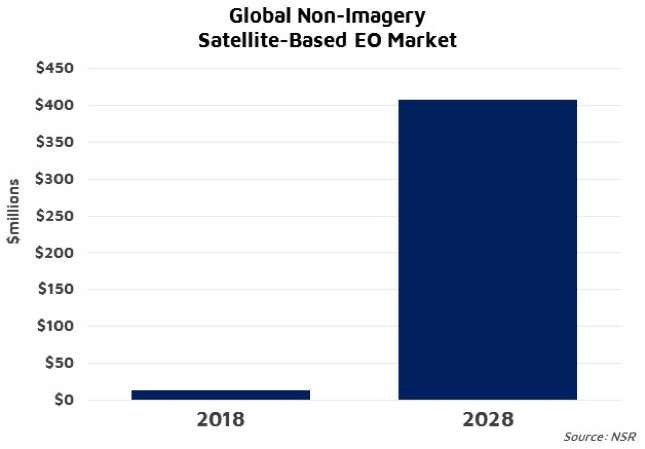 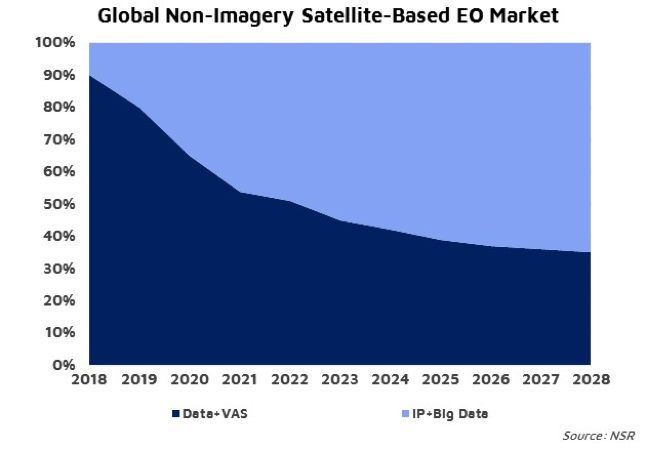 NSR’s Satellite-Based Earth Observation, 11th Edition report forecasts the cumulative revenue opportunity from the sale of non-imagery EO data, and derived products, to exceed $1.2B by 2028, growing at a CAGR of 46.5%. Over 250 satellites are proposed to launch by 2028, with some already deployed by Spire, GHGsat, and Orbital Micro Systems that will give the impulse to these revenues. As with any new product or service coming to market, the logical next questions should be: “What is the value?”, “Who are the customers?” and, “What are the challenges?”

What is the Value?

While optical is occluded by clouds, and radar sees through it, non-imagery data provides insight on the changing composition of the atmosphere. Naturally, weather forecasting stands as the most relevant application, but many other EO services incorporate weather models into their analytical pipelines. Take Descartes Labs, for example, who added weather data to its geospatial platform in 2018, stating such data was “critical in understanding and tracking how weather conditions impact plant health, the shipping and transportation of goods across the planet and energy pipeline health”.

Who are the Customers?

Initial interest for this data and service stems from government customers. Last year, NOAA’s 2nd Commercial Weather Data Pilot program gave $8.3M to Spire, GeoOptics, and PlanetIQ for the provision of radio occultation data via satellite. This year, GHGsat was awarded $3.3M from the government of Canada, and signed a framework agreement with Shell for methane monitoring services. 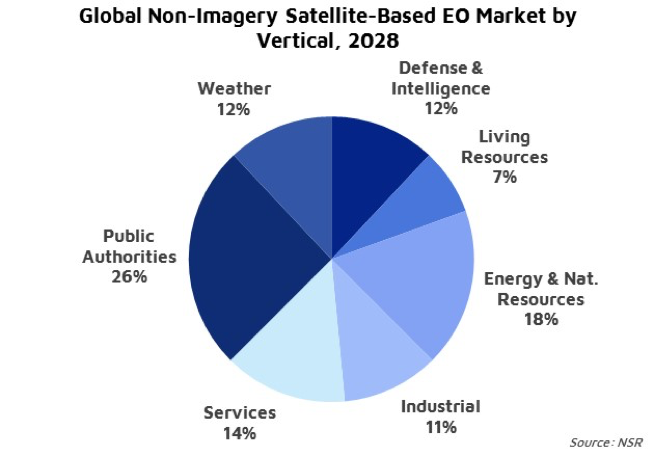 What are the Challenges?

Data validation will take time, effort, and cost, and its very diversity will make it difficult to scale products and services up and out to more and more varied customers. Next, contrary to imagery, which has inherent value in its raw form, the key value of non-imagery data lies in derived products, such as monitoring and analytics. This will pressure operators to launch more satellites and develop analytics-based tools and services to generate the most insights from their data. Finally, free government data, from the likes of the upcoming Sentinel-4 satellite, and more importantly, mandated and distributed via the World Meteorological Organization’s Resolution 40, may restrict the commercial opportunity. As such, NSR’s forecast remains conservative, growing slowly in the near-term, and shifting from data to data analytics in the long-term, with downstream services responsible for 65% of all non-imagery EO revenues by 2028.

Non-imagery data types, namely radio occultation, microwaves, and greenhouse gas emissions are an exciting new product and service being offered as part of the bustling commercial satellite-based Earth Observation market. New technology, growing pressure over environmental regulation and monitoring, and growing data pipelines are enabling its development. While the market has high potential, several challenges remain, typical of the Earth Observation space, which will require strategic go-to-market strategies, and considerable CAPEX, to achieve its full potential as a key tool as more attention is given to changes on the climate.