Home > The Bottom Line > FPAs: From a Niche to a Necessity

FPAs: From a Niche to a Necessity

February 26, 2019 by Dallas Kasaboski | More from this Analyst | Profile

Could be that e) covers it all. For years, the emerging nature of FPA technology has long maintained price and performance as the main market obstacles. Compared with parabolic systems, flat panel antennas were not seen as viable, except in environments requiring a low-profile solution.

Outside of government & military applications, and commercial aviation, FPAs gained little traction due to stringent network requirements and price-sensitive customers. Going forward, both are expected to be even more demanding, requiring higher reliability, lower prices, and more terminal capabilities.

While the goalposts for the greater take-up of FPAs keep moving further out, the networks of tomorrow may set requirements that are too demanding for parabolic antennas. This in turn, pressures flat panel technology to come to fruition sooner rather than later in the hope of moving it from a niche product to a necessity. Given the state of play today, how likely is it that FPAs will serve the networks of tomorrow and star in that lead role? 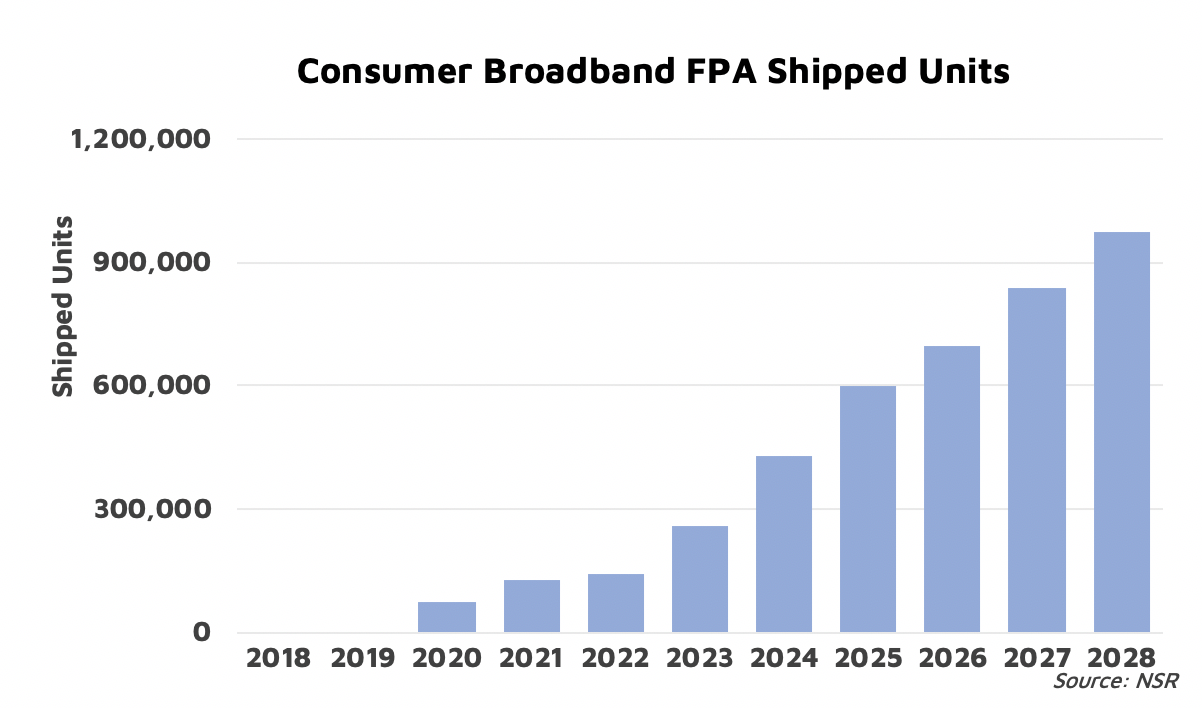 NSR’s recently published Flat Panel Satellite Antennas, 4th Edition report considers it likely, but very challenging to get the role. The report forecasts over 1.5 million units to ship in 2028, growing at a strong CAGR of 71.2%. Mobility will continue to dominate equipment revenues, with complex capabilities keeping terminals expensive. Volume will be driven by Fixed Applications, specifically Consumer Broadband, but only if manufacturers are given more incentives to drive down prices to target the largest addressable markets.

The largest incentive of FPAs is the opportunity to serve some of the largest, least connected markets through Non-GEO HTS capacity. These require terminals that can simultaneously track, switch, and point to several satellites, seemingly not feasible for traditional, parabolic systems. With most constellation announcements focusing on bridging the digital divide for markets such as Consumer Broadband and the connected car, next generation FPA systems could stand to corner a much larger part of the market than ever before. However, pricing is not favorable, proving to be too expensive and even antenna manufacturers remain divided on near-term feasibility. In short, electronically-steered FPAs may be necessary to close the Non-GEO HTS link, but not until mass production, innovation, and value-chain collaboration bring prices down. As such, NSR forecasts FPAs for Consumer Broadband will focus on delivering Non-GEO HTS capacity, beginning after 2020 and scaling up to almost 1 million shipments annually by 2028.

More than a Link

Aside from unlocking new applications, the future of satcom will require greater capabilities for existing networks. Focusing on government and military users, NSR found that price and performance were only the start of the terminal selection conversation. These terminals must work, no matter the operating environment, and be able to negotiate between orbits, frequency bands, and network mismatch. While current solutions using multiple parabolic antennas may be sufficient, NSR expects pressure from Non-GEO HTS, and innovations afforded to electronically-steered architectures, to favor FPAs, especially long term.

Antenna manufacturers are one part of the ecosystem, and collaboration will be key in developing next generation systems that not only competitively perform, at the right price, but also fit the market need, providing the extra capabilities customers are demanding. Fortunately, collaboration and partnership between FPA manufacturers and the rest of the value chain has been at an all-time high this last year. From the announcement from SES concerning working with FPA manufacturers for mPower, GetSAT and Honeywell’s multi-million dollar contract win to serve U.S. Government mobility, and Isotropic Systems’ $14M investment round driven by Boeing-led HorizonX venture, it seems the industry realizes that FPAs will be a necessary part of satcom strategy going forward and forging the needed partnerships to get there.

Flat panel antennas represent a key component toward delivering greater capacity and capabilities on next generation networks. Given 5G, non-GEO HTS, evolving customer demands, and a need to target new markets and generate new revenue streams, the satellite industry will require innovation to stay competitive. The ground segment can no longer remain the forgotten link, and in order to close the business case of tomorrow, many will find that FPAs will no longer be niche, they will be a necessity.