GEO vs. Non-GEO: Who Wins the $90+ Billion Consumer Broadband Opportunity?

November 21, 2019 by Vivek Suresh Prasad | More from this Analyst | Profile

Consumer Broadband has been at the epicenter of the buzz created by the planned mega-constellations and upcoming very high capacity satellites. SpaceX, OneWeb and now Amazon plan to connect the unconnected billions globally, using Low Earth Orbit (LEO) satellite constellations. In the other camp, Geo-Stationary Orbit (GEO) players ViaSat & Hughes (EchoStar), are focused on installing terabit order capacities in the coming 2-3 years to extend their services into newer geographic avenues at competitive data rates and pricing packages.

According to the ITU’s The State of Broadband 2019 report, the world achieved a major milestone with greater than 50% global broadband Internet penetration in 2019. However, a large percentage of the population is either still unconnected or do not use the Internet due to cost as well as lack of Internet usage knowledge. Moreover, among the 50% Internet users, a significant portion are underserved. Satellite broadband is considered as the core to achieving higher and improved penetration to these un/underserved regions/population owing to its benefit of reaching remote areas at lower CAPEX than fiber.

Considering the above factors and The Inclusive Internet Index data, NSR estimates the global total addressable market (opportunity) for satellite broadband to be 433+ million households where the current SATCOM service penetration is only 0.63%. The big question is: how much revenue can the SATCOM industry achieve out of this massive addressable market? 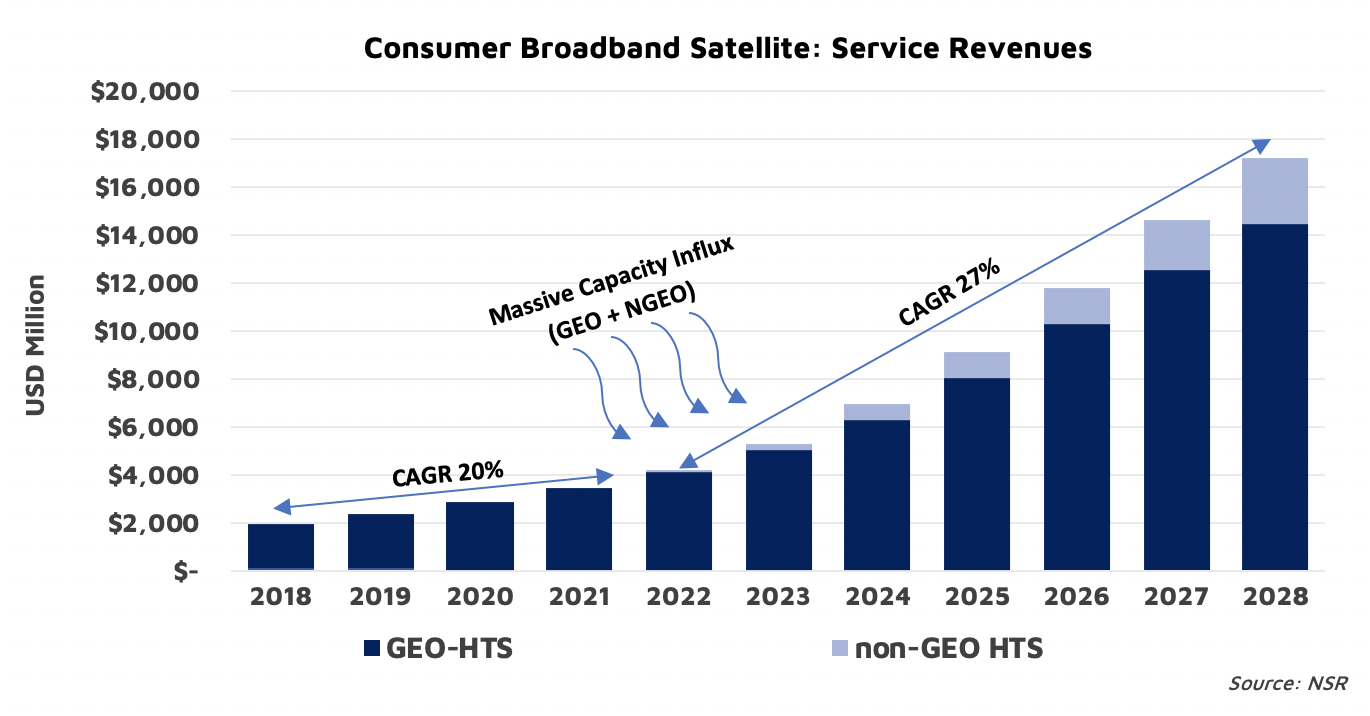 Service revenue is estimated to generate USD $79.7 billion during the forecast period. Revenue growth will remain moderate till 2021 but will accelerate during the mid and long term driven by massive capacity in-flow that will in turn lead to lower prices. Although the Non-GEO players’ business model is primarily based on the consumer broadband segment, it will be the GEO-HTS camp that will capture 89% market share of total service revenues.

It is worth noting that multiple ongoing programs are facing delays or have exited the market due in part to a financial crunch. In recent days, Leosat, which was planning 78-108 satellites for high-speed Internet, stopped its pursuit due to the lack of investors. Also, the yet-to-prove Non-GEO business model must contend with the ground segment as their main bottleneck. Current Non-Geo ground segment prices are nowhere near the needed consumer broadband segment pricing.

The regulatory attribute, which is a key for market penetration, is gradually moving in a favorable direction with 164 countries having introduced their national broadband plans, digital strategies or ICT plans, according to the ITU’s The State of Broadband 2019 report.

The other success variables in the segment are product, pricing and penetration. 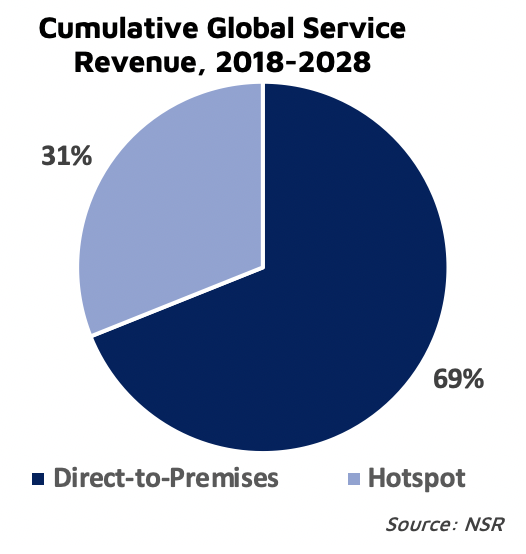 Product: The right product for the right customer segment is the key for achieving growth. For example, the customer group in the North America Region is underserved and hence higher bandwidth services are needed. According to the FCC Broadband Report 2019, around 20 million Americans lack a connection of at least 25 Mbps/3 Mbps. However, in the developing regions such as Latin America and Africa where affordability is a concern and the regions are unserved, Wi-Fi-Hotspot based services are a more relevant solution. The model enables the service provider to achieve overall healthier ARPU per deployed unit due to the shared connection. As a recent trend in the GEO-HTS segment, Hughes in-partnership with Facebook launched Wi-Fi-Hotspots across Brazil and Mexico.  NSR estimates 31% of the global service revenues to be generated by the Wi-Fi Hotspot model during 2018-2028.

Pricing: Increasing competition, falling capacity pricing, customers’ price sensitivity and pressure to unlock larger addressable markets will force service providers to keep margins in check. The positive for GEO-HTS service providers is the provisioning of HTS capacity for Consumer Broadband, as this will keep the cost of service in control. Service providers must focus on the utilization of affordable capacity to unlock market elasticities. Looking at Non-GEO service pricing, it is too early to determine their entry level service pricing in a region. Also, current Non-GEO equipment pricing is far from the reach of consumer broadband customers. Anticipation of price reductions for a commercial Flat Panel Antenna remain, and it is likely to take at least 3-5 more years for a significant output/price drop matching the consumer broadband segments’ expectation.

Penetration: This is the most complex variable as it is dependent on many other factors including customer demographics, value chain dynamics, pricing, regulatory landscape, etc. Satellite operators moving down the value chain, Telco players expanding their service portfolio, Satellite operators partnering with service providers, Service providers partnering with regional Telco Players and service providers partnering with equipment manufacturers/distributors are some of the key strategies that need to be employed to achieve higher market penetration. In the past, multiple strategies have failed due to flawed retail and distribution channels. Investing in reaching customers is expensive and takes time. The focus should be on efficient channels that ensure sustained growth in mid and long term.

The global broadband segment barely scratches the surface of the total opportunity sphere, with the current service penetration of less than 1%. The segment has greater potential and with the continuous provisioning of capacity, the growth trajectory is assured. The segment growth during the period will be by far higher than any other satcom segment driven by the massive addressable market. But clearly, there are challenges related to market penetration and price sensitivity. But with upcoming low-cost capacity (HTS), regulatory ease/streamlining, demand for more data (Video), downstream partnerships and consolidation, new business models such as Wi-Fi-Hotspots and efficient distribution channels, this will lead to growth acceleration in the mid & long term, especially for the GEO-HTS players.

Comparing GEO with Non-GEO players, GEO players are on the growth track with the expansion into new geographies, building efficient distribution channels and utilizing falling capacity pricing for unlocking market elasticities.  Non-GEO players are still in their development stage (except for the few initial launches) and have multiple hurdles to overcome over product, pricing and penetration variables. The consumer market has the potential where GEO and Non-GEO (albeit not all) players can co-exist. But, during the forecast period it is highly unlikely that a Non-GEO player will capture a leadership position in the consumer market owing to their current financial, infrastructural and technology state/challenges. Undoubtedly, GEO-HTS players will have better penetration with most suitable pricing in the segment resulting in 89% revenue share.