Home > The Bottom Line > Gov & Mil Markets: Is It All About the Frequency?

Gov & Mil Markets: Is It All About the Frequency?

MILSATCOM or COMSATCOM has been one of the most contentious debates in the Gov & Mil Markets over the past five years.  On the surface, the debate is all about the economics of ownership – in the truest definition of economics – including all the opportunity costs associated with MILSATCOM networks.  Recent acquisition of 2 additional WGS satellites, and a line-item in U.S. budgets associated with the procurement of commercial capacity has continued the debate.  However, as the U.S. DoD and other Gov & Mil organizations begin building next-generation communication networks, they are increasingly focused on IP-layer compatibility, rather than the historical link/RF-layer integration.  How does this shape up for the revenue opportunity for SATCOM players in the Gov & Mil Markets? 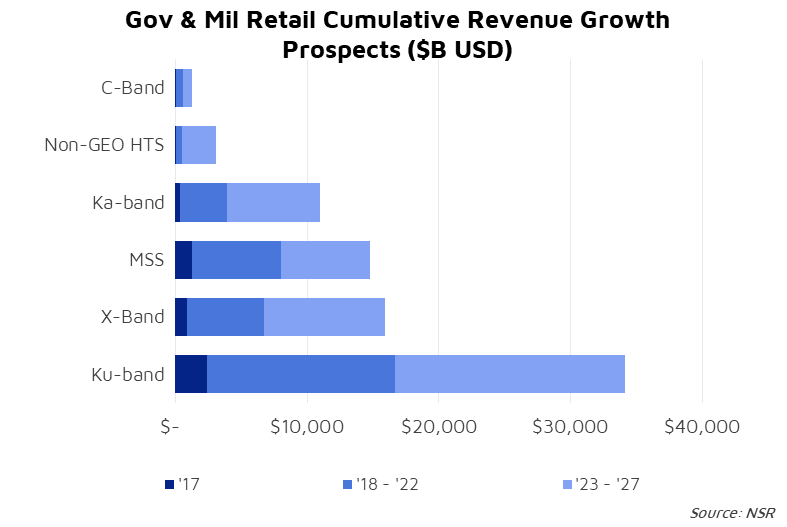 According to NSR’s Government & Military Satellite Communications, 15th Edition study, the answer appears to be Ku-band.  Of the nearly $75B in cumulative revenues projected over the next ten years, 42% of those revenues will be in Ku-band.  Only 34% will be in ‘gov friendly’ Ka or X-bands.  However, that only scratches the surface.  Drilling down into the core segments of the market – Aeronautical, Land-Mobile, Maritime, or Capacity Leasing, starts to paint a more complex picture. 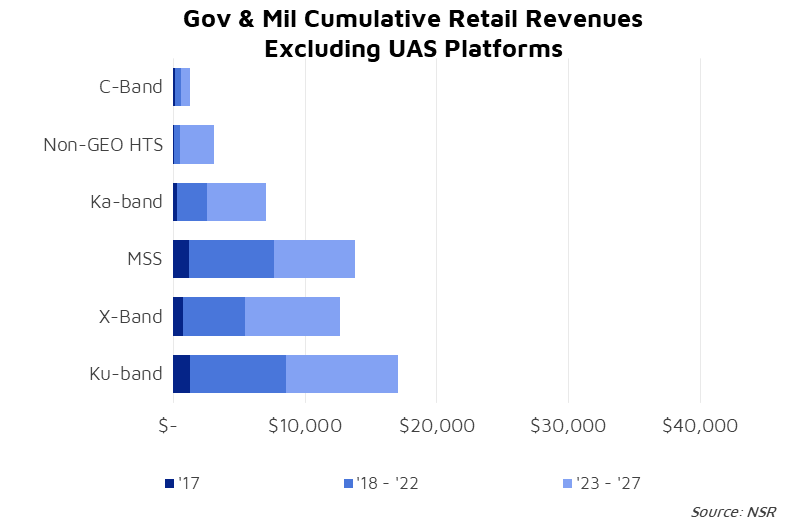 Ignoring UAS platforms alone, which account for 32% of cumulative retail revenue growth, the picture gets a bit more complex.  With a large installed base of FSS Ku-band terminals, UAS platforms are unlikely to see a significant shift away from Ku-band in the next decade as the cost of retrofitting these platforms that are already approaching the end of their airframe life makes little sense.  These are also some of the cheapest, and most exported platforms.  As such, for the near future they will likely continue to be outfitted with Ku-band terminals.  These platforms may receive upgraded modems to operate on GEO-HTS networks, and some might even receive new terminals to operate in new or multiple frequencies.  However, for the bulk of the fleet over the next ten years, UAS platforms will be a Ku-band focused opportunity. 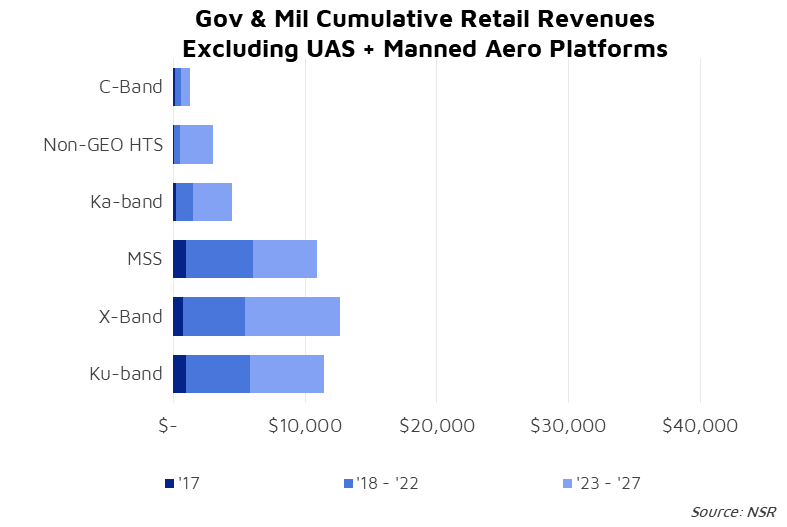 Exclude Manned Aero plus UAS, and the picture quickly starts to shift away from Ku-band.  Outside Aero (which admittedly is a significant piece of the market), and the terminal landscape quickly starts to favor ‘gov-friendly’ X/Ka-bands.  Focusing on Bulk leasing, Land-Mobile, and Maritime, the market seems up for grabs.  Ku-band will still have a sizeable role, alongside MSS applications (mostly narrowband IoT-type plays aimed at improving situational awareness), but the ‘growth driver’ are X-band focused Land-Mobile Comms-On-the-Pause (COTP) segments.  And yet, focusing exclusively on the frequency ignores some of the changing dynamics occurring in both commercial and government markets.

Remote sites are becoming more complex, with multiple frequencies, orbits and architectures.  A prime example being the U.S. Navy Multi-band terminal program, which leverages a combination of frequencies (both commercially-sourced and government-owned) to provide connectivity.  Or, ViaSat’s Ku/Ka-band deployment for U.S. Senior Leadership Airframes. Or, Orange’s multi-band infrastructure developed for the French MoD. Or, the expanded availability of dual-band COTM terminals. Or, tri-band maritime antennas certified to operate on SES’s MEO infrastructure. Or, … the list continues to grow.

Limiting the lens to a ‘frequency-centric’ view ignores the real reason that Gov & Mil network designers are moving towards IP-based integration – that they want terminals and network designs that are highly flexible.  Meaning, they want ships, planes, tanks, trucks, forward operating bases, etc. to have the ability to freely roam amongst a range of networks.  While one cannot overcome the significant inertia of an installed terminal basis in the aero markets, there are clear signs of a market shift occurring towards a combination of frequencies in order to fulfil Gov & Mil missions