Home > The Bottom Line > HAPs: From the Edge of Space

HAPs: From the Edge of Space

October 11, 2019 by Shivaprakash Muruganandham | More from this Analyst | Profile

Two years ago, an unlikely candidate made its way up to the edge of space: KFC’s Zinger chicken sandwich aboard the Stratollite balloon platform. Last week, the NHL’s Vegas Golden Knights set a record for the highest puck drop ever, sending the ceremonial first puck into the stratosphere. Ever since the record-breaking high-altitude jumps by Felix Baumgartner with Red Bull Stratos and Alan Eustace with the StratEx project, the use of high-altitude platforms has made its incursion into the mainstream, garnering attention in the media and entertainment world by providing advertising and marketing solutions from near space. 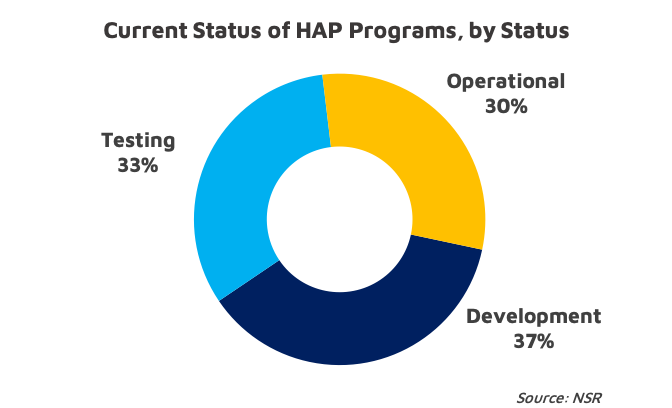 While the above might be rare and one-off occurrences not indicative of a significant market opportunity, serious developments have been underway in the high-altitude platforms (HAPs) sector in recent years. HAPs now stand at the edge of newer technological developments that are poised to drive this slowly progressing market forward.

NSR’s High Altitude Platforms, 3rd Edition reported a $2 billion market opportunity in cumulative revenues over the coming decade, with more than 60% expected to be derived from the manufacturing of platforms, and the rest, a variety of services. While there are nearly 3,000 HAPs in-service units expected through the next decade, what kind of platforms are these, and what applications actually drive this demand? 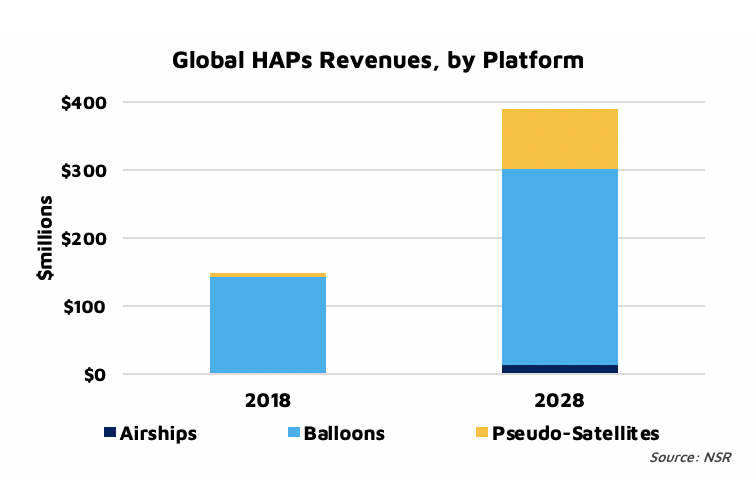 Stratospheric balloons are by far the most mature HAPs market, with a number of programs currently operational, mostly driven by the lower capital expenditure and availability of COTS balloons. Only a handful of manufacturers dominate the market, but services range from communications and remote sensing to scientific research and orbital launches. This makes stratospheric balloons the largest segment, accounting for nearly 80% of the market opportunity up to 2028, driven by high-volume demand and lower unit costs.

Alongside a history of scientific and weather ballooning activities, commercial interest has been fueled by the communications sector, with the likes of Project Loon driving the demand. Six years since inception, Loon is closing in on its goals, having set a milestone of 1 million stratospheric flight hours. Despite cost advantages, the high-profile nature of such missions is also subject to negative public attention, particularly from the numerous crashes/accidents that have occurred in remote areas.

Pseudo-satellites, or high altitude UAS platforms and drones make up the next largest segment, with a significant number of programs presently in the testing and development stages. This market benefits from parallel developments in the UAS and small satellite industry, both of which have a well-entrenched ecosystem.

Remote sensing and ISR applications are expected to be a key driver here, with European platforms such as Airbus’ Zephyr already in the market. A wave of funding interest in the wake of technology developments in better battery technologies and structural advances has also given rise to more programs entering the R&D / testing phase, such as Ordnance Survey’s Astigan or the Odysseus from Aurora Flight Sciences with persistence monitoring capabilities. HAWK30, the pseudo satellite in joint development by AeroVironment and Softbank Corporation, for instance, announced a successful first flight just last month.

Despite having closed down the Aquila project, Facebook continues to spur developments through partnerships: following a joint trial with Airbus, the social media giant also pursued a joint demonstration with HAPsMobile to showcase backhaul capabilities. However, as with balloons, concerns surrounding crashes and accidents, as with Zephyr’s second reported crash of the year, will prove to be a setback.

Lighter than air (LTA) buoyant powered aircrafts, or airships, make up the last of the high-altitude platform segments. Comparatively more expensive with intensive R&D requirements, airship programs are largely in the development/testing phase. The airship sector has experienced at least two waves of interest in the past few decades, each time, resulting in little to no commercial outcome.

With newer technological trends though, the active development of platforms such as Thales Alenia Space’s Stratobus is expected to drive this market forward. On the other hand, severe competition from balloons for commercial applications, and pseudo-satellites for military applications, might limit this potential opportunity.

As downstream Earth Observation and communications service providers eye lower latency, the demand for alternatives to satellite platforms is on the rise. The cost of payloads and subsystems for the stratospheric environment is comparatively lower than space-grade equipment. With reusability and economies of scale providing cost benefits, HAPs are expected to cater to a variety of applications across government, military and commercial sectors.

On the whole, the HAPs markets are under development, driven by advances in the stratospheric balloon, pseudo-satellite and airship sectors. However, this is still a nascent, fragmented industry without a well-established ecosystem, susceptible to negative media attention and competition from UAS/satellites.