November 20, 2019 by Shivaprakash Muruganandham | More from this Analyst | Profile

While the satellite industry is buzzing over the evolving LEO constellations wave, with news ranging from the launch of SpaceX’s Starlink satellites to the shutdown of Leosat, there is a similar flurry of activity at a much lower altitude in near-space. This is being led by companies with a similarly grand vision to provide connectivity, but from high altitude platforms (HAPs) in the stratosphere. But, to advance towards their optimistic future requires avoiding many pitfalls and overcoming several challenges. 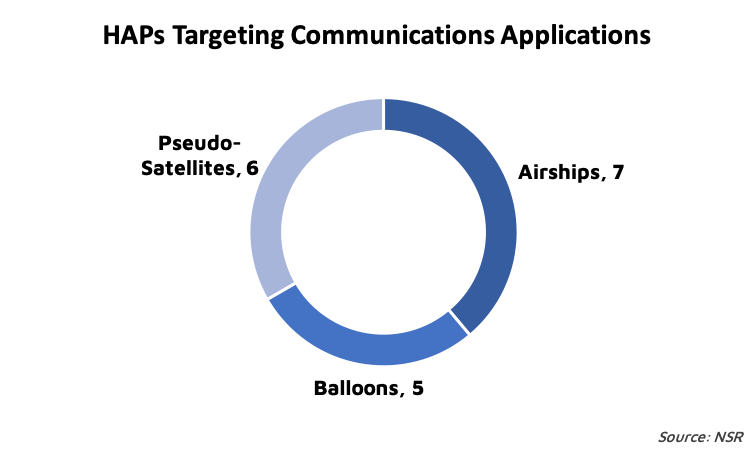 HAPs have been proposed as a quickly deployable, long endurance potential alternative/complement to satellite connectivity, for both fixed broadband communications as well as connectivity links between mobile and core networks for backhaul. These applications are seen as crucial to enable broadband communications in remote regions, particularly in mountainous, coastal and desert areas.

Various architectures are considered and similar to the use of inter-satellite links in LEO constellations, inter-HAPs links are also expected to reduce the need for ground system infrastructure, allowing for rapid deployment in use cases such as disaster recovery. With technology advancements in solar panel efficiency, battery energy density, control systems and material composites, HAPs have become a much more viable concept today as compared to two decades ago when the ITU first started studying them.

On the other hand, there are significant challenges to overcome if they are to become commercially viable in the global broadband connectivity market.  Prime amongst the challenges is costs: in projects like Loon, while the cost of a high-altitude balloon for communications is low in comparison to an airship or a LEO satellite, balloons are limited in capabilities in terms of platform reusability and coverage area and are not ideal for wide area communications. In addition to this, the maintenance of such a network has its own challenges, driving the OPEX higher. High altitude balloons have had their fair share of mishaps in recent years, and such accidents could dent the reputation and viability of promising high-altitude applications.

For an organization like Alphabet, that derives the majority of its revenues from advertising, Loon was initially expected to serve as a gateway to access an audience from untapped regional markets to grow their main revenue streams.  However, with serious reliability concerns due to wind patterns, and a lawsuit settlement over IP infringement, the timeline on Loon’s commercial viability is unclear today.

Despite kicking off commercial tests in Kenya, other wireless carriers have remained unconvinced of the reliability and safety of Loon as a communication Infrastructure, preferring to wait through the demonstrations. Commercial broadband services alone will not be sufficient for Loon to sustain itself, and the company will need to look at alternative/complementary revenue sources if it is not to go the way of GoogleX’s other stratospheric concern, Project Skybender.

That said, its networking software is a powerful tool: the SDN platform it uses to control its balloon fleets is its USP. Used for the control of its mobile aerial stations, this software will be a key element in the roadmap of complex LEO constellations going forward, and this opens up the opportunity for a secondary revenue stream that Loon can take advantage of. The agreement with Telesat to develop a network operating system was a first example of such a move, and closing the sales of other services will be critical if Loon is to remain viable commercially, at least in the short-term.

As for pseudo-satellites looking to target the communications market from the stratosphere, the story is also unfolding, but slowly. Players such as Facebook continue to remain invested despite closed projects in their past: this is seen in Facebook’s involvement with the Softbank led HAPsMobile platform, or with Airbus’ Zephyr platform. However, such efforts have also had their share of mishaps.

Spectrum regulations is a piece of the puzzle for HAPs-based communications, and ITU-R studies have already identified that current HAPs allocated frequency bands might not fully accommodate the needs of today’s platforms and are thus expected to be updated. Most recently, HAPSMobile (in the lead up to WRC-19) proposed that HAPS spectrum bands be expanded beyond the 2GHz that are presently approved for HAPs stations, to include global mobile spectrum bands. To that end, American telecom company Sprint filed a request to test the stability and reliability of a HAPs-based LTE network in 1.9 GHz and 2.5 GHz. Such an expansion could allow operators the flexibility that will be imperative in implementing a HAPs based mobile broadband communications system.

In the wake of recent technological advances that have improved the viability of HAPs, the need to provide such platforms the access to global broadband services via spectrum regulations has become critical. On the other hand, several pitfalls remain, such as cost considerations of such platforms and its unproven commercial viability, which demand that they rely not only on the potential for revenues from connectivity services but other ancillary services.

The use of multiple solutions at play, whether they are terrestrial, in-space or near-space, will be essential if true global connectivity is to be achieved. While such lofty visions are certainly commendable, the more immediate need for HAPS revenue generation as a business will require greater collaboration between organizations, leading to a cross-pollination of technologies and solutions, that will eventually allow them to get there and meet the challenges ahead.