It is fair to say 2020 has been widely chaotic, and that is no different for the space launch industry. The industry is facing a pandemic that affects the global aerospace workforce, a spiral of launch delays and supply chain issues, and a string of launch failures from established and new launch providers alike – and it is only July! One of the biggest unanswered questions is the extent of impact of this seemingly disastrous year on the launch sector, which is solely responsible for our access to space. However, uncertainty around business case viability is nothing new to this high-risk and adaptable sector – so is the situation as dire as we think, or are we needlessly catastrophizing as an industry?

NSR’s Global Satellite Manufacturing and Launch Markets, 10th Edition report examines the satellite industry for the next decade through the lens of changing industry dynamics and COVID-19 impact, forecasting over 12,000 satellites of all mass ranges to be launched over the next 10 years, generating a cumulative opportunity of $131.2B in launch revenues alone. The demand for satellites and their services continues its growth, leading to further market expansion. How does this growth fit the overall picture, especially when everything in 2020 seems so doom and gloom? 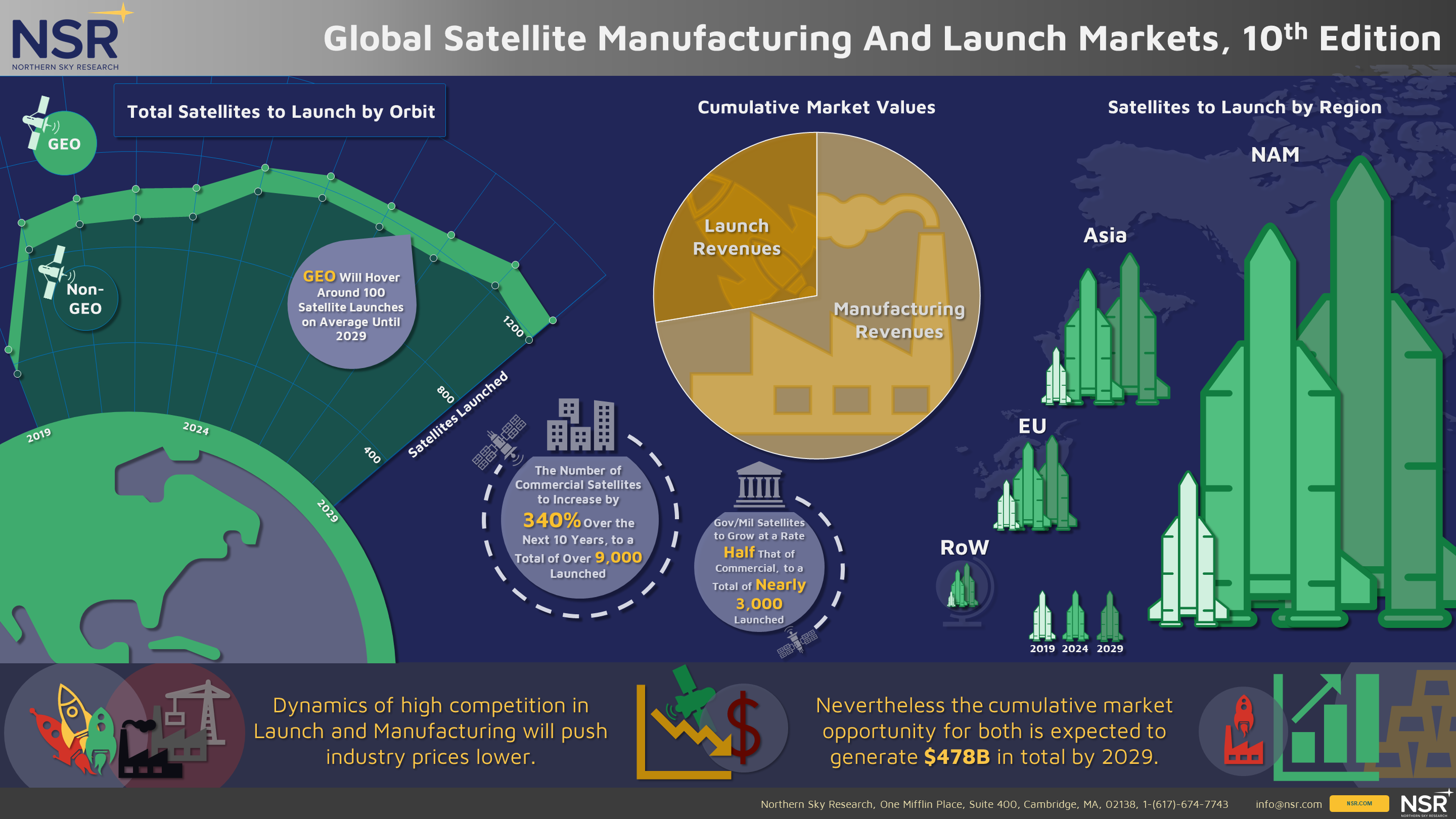 There have been 6 launch failures so far in 2020 – 3 from China, 2 from U.S.A., and 1 from Iran. This is already a high number of failures for the year, compared to that of previous years: 5 failures in 2019 and 3 failures in 2018. However, 4 of the 6 failures have been the result of inaugural launches of new rockets, including the failure of Virgin Orbit’s maiden flight, and 1 failure was from a vehicle that had failed multiple times previously (Iran’s Simorgh). Perhaps most of the 2020 launch failures can be associated with higher risk of failure due to new technology and maiden orbital launches, but established actors are also seeing effects on their schedules due to strained supply chains and logistics issues. Rocket Lab’s first failure of a commercial flight came after a pause in launch operations due to the pandemic crisis; curiously, the company’s intended focus for their recent launches was on decreasing turnaround time between missions. Other players like SpaceX and Arianespace have seen delays due to a mix of factors like weather conditions, with Arianespace opting to reshuffle its launch schedule and push the debut of Ariane 6 off to next year.

Additionally, there are other, less direct factors contributing to the overall situation. Space projects rely heavily on the ability to raise funding from a variety of sources. Because the global recession has caused major investment pullback, financial resources are even more scarce than before, and companies that are hit the hardest are those in early, pre-revenue generating stages or ones engaged in verticals with high risk and long development runways. These include players worldwide pursuing cash-intensive and highly competitive business cases like rocket development. Even prior to the economic crisis, the business case for developing new rockets was difficult to make, and pressure on those already involved in the competition fell on method of differentiation from other competitors. Now, as investors are taking a harder look at the overcrowded playing field, funding yet another new rocket comes at the expense of other space projects, putting significant pressure on timeliness and proof of concept missions to justify their existence and attempt to ensure the future possibility of receiving further funding.

Launch failures and delays will certainly occur as par for the course, and various added pressure in the face of economic uncertainty will undoubtedly continue to have some effect on all players involved in 2020 and beyond. Exits and market consolidation are to be expected as market resources grow more constrained over time. However, compounding all setbacks that 2020 has brought does not yield a reliable picture of the industry’s current situation and should not be used to assess our trajectory moving forward.

The pandemic is not the culprit to blame for all of the industry’s hardships – we have to keep in mind that competitive uncertainty was high in 2019 even before the economic crisis. A more tempered approach is to keep calm and continue on the projected path of growth and resilience.