Home > The Bottom Line > How Big is the Satellite Backhaul Opportunity?

How Big is the Satellite Backhaul Opportunity?

Backhaul is one of the key growth engines for the Satcom Industry. A large portion of satellite capacity coming online in the next few years is purposely designed for Backhaul and, despite COVID-19, the segment continued to show major contract wins. But how big is the market, and for how long can this growth trajectory continue?

Emergence of HTS, evolution of ground segment and the push to connect rural areas with quality coverage transformed Backhaul from being a niche application to becoming one of the pillars for Satcom growth. The industry is still in the early phases of growth. In fact, NSR’s Wireless Backhaul via Satellite, 15th Edition report estimates revenues to grow at 17.6% CAGR in the next 10 years.

NSR developed a high-resolution model, which analyzed a 5 km global grid, which considered:

The result led to NSR estimates of the total unserved addressable market for Satellite Backhaul at 22 Tbps for 2020. This figure will continue to grow in the coming years as end-users consume more bandwidth every year even when accounting for some downward pressure due to the expansion of terrestrial networks.

Comparing the addressable market with today’s Satellite Backhaul traffic at 224 Gbps, it is fair to conclude that the industry is just scratching the surface of the opportunity, and there is still vast growth to be captured.

The question then is how to unleash this large potential. For many years, satellite was a last-resort solution only used for coverage obligations when there were no alternative technologies. Simply put, Telcos and MNOs could not close the business case and ignored this market for understandable reasons. However, this has now changed, and satellite can begin to offer a positive return on investment for MNOs deploying coverage into Greenfield markets. This has triggered massive deployments and is obviously a major incentive for MNOs to continue expanding coverage into rural and underserved areas with low population density and lower disposable income levels compared to urban areas.

Total Cost of Ownership (TCO) is not the only challenge for Satcom adoption. MNOs many times still lack the skills to deploy satellite or the drive to expand into ultra-rural areas as their operations are optimized for urban locations where they extract the majority of their revenues. As such, the satellite solution must be very easy to integrate (clear SLAs, OSS/BSS, etc.), and the industry should be more reassuring in those areas that pose technical burdens. In fact, NSR is aware of several contracts that were halted due to MNO doubts around Satellite network integration. In terms of ROI and business aspects, MNOs may simply not want to risk venturing into ultra-rural operations and here, new Business Models such as Infrastructure-as-a-Service show great promise in terms of incentivizing Satcom adoption.

Government initiatives also play a big role in this expansion of Broadband coverage such as the New Deal for Mobile program in France or BAKTI in Indonesia. These two countries exemplify initiatives taking place in both developed and emerging economies across the globe. 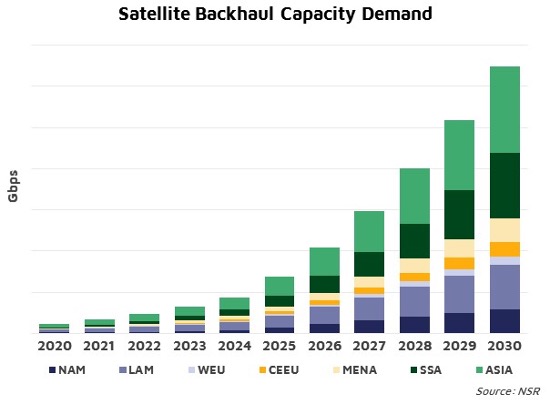 With a TCO that allows MNOs to close the business case, convenient technology and operations solutions and the governmental drive to close the digital divide, the satellite backhaul market is heading to unprecedented growth where total capacity demand will exceed 6 Tbps by 2030.

Backhaul offers an extraordinary opportunity for growth with a total addressable market of 22 Tbps. At today’s supply levels (NSR’S GSCSD17 report estimates total HTS supply for 2020 was 2.7 Tbps), the question is not if the Backhaul addressable market is big enough to generate growth, but how capable and willing is the satellite industry to set the conditions to activate this growth. Making satellite easier to adopt with seamless integration, offering infrastructure-as-a-Service, and generating positive-ROI business cases for MNOs to expand Broadband coverage will be key for unlocking growth.