When NSR noted that IFC markets did not do so well in 2018, it was not comparing the ‘hype’ with its forecast, but rather its own forecast with respect to contracts signed, antenna production, installation rates and aircraft to be outfitted.  All these factors did not pan out as expected and despite a rather gloomy outlook, we found sign that the bad from last year could give way to the good this year.

NSR’s Aeronautical Satcom Markets, 7th Edition report indicates that with traffic trends, RPK growth, deliveries and orders of new aircraft as well as more connected airframes in service, the advent of more high-throughput capacity in the next few years gives hope that this is the best time to invest in some form of connectivity for aircraft.

Amidst talk of monetization, social media influencers, cybersecurity risks and artificial intelligence in aircraft, participants at this year’s GCA Summit are likely to hear stories about how the HTS ‘market grab’ started a couple of years ago to become an enabler for all these. And this trend is likely to accelerate, in particular for airlines with many aircraft under contract as a fair number of them are rolling-out this year for the likes of Inmarsat, ViaSat, or GoGo.

Indeed, the backlog of aircraft to outfit with HTS capacity overall is staggering:  around 3,000 expected in the next two years (it’s no wonder NSR see HTS reaching revenues above $2.3 B in 2028).  This amounts to roughly 25 widebody and 100 narrowbody to outfit a month for 2019 and 2020.  Considering rates of installs from 3 to 15 days per aircraft, across 10 service providers, this is well within the ‘ballpark’, and the NSR forecast of 6,500 HTS-equipped aircraft by end of 2020 – from todays’ roughly 3,500 – is not a far-fetched number to reach.  Just for 2019, this represents a good portion of the expected $450 M in new revenues from IFC.  As noted, the underlying industry capability is really there to “put it together”.  And if we look at these numbers through another lens, it means 5 million passengers a day in these aircraft that should be exposed to the cream of the crop of satellite capacity by the end of 2020.  That’s a lofty goal to aim for monetizing one of the elusive golden goose of the satellite industry…but we know how things do not always pan out necessarily the way it’s planned. 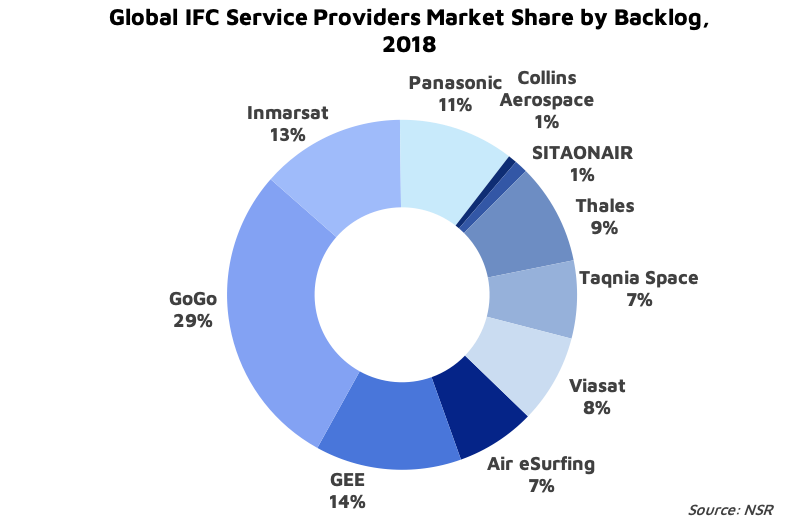 The IFC industry still has issues to work around: IFC systems can cost as high as $1M per aircraft, the B737 Max is still grounded and STC approvals along with airlines delaying decisions to outfit their fleet are putting a damper on expectations.  And then, for the technology-savvy, no flat panel electronically-steered antenna or LEO HTS constellations seem to point their nose in the direction of this market anytime soon.  All in all, if revenues are an indicator, its growth in 2018 was 40% of what was expected.  It’s nothing to phone home about.

But all the while, there is an upside as more talk about installation rates going up, spectrum availability and diversity, implementation of standardized equipment, SLAs and quality of service (SLAs) enabling better connectivity point to a trend in the industry that is healthy. The proponents in the industry no longer say: “Passenger demand for connectivity is skyrocketing, so the IFC market will be huge,” and then go on fleet-wide contracts.  It’s more : “What is the right business model, prices, the best quality experience for passengers so they use it more and feel like coming back?”

Much of the talk that gave a mental block to many about investing in IFC seems to have shifted towards the more inherent qualities of a market and really boil down to one key indicator: end-user satisfaction.  The IFC market has come a long way, and the satellite industry has the capability and skills to deploy hundreds if not thousands of aircraft with a high-throughput satellite link and help deliver on the promise of the market.  So maybe this year will be the one to do just that and ‘make it a good year’.