Wrong: in an unsuccessful or unfortunate way or out of working order or condition

These two definitions offered by Merriam-Webster’s dictionary could aptly describe what many believe is the quality and state of inflight connectivity in general today.  But is this the right way to think of a business on a slow but definite upward slope?

Stories that rub the ‘wrong’ way on IFC include icing fluids or rain entering radomes, bird-strike issues, networks unavailable for long parts of flights, passengers unable to connect to the onboard Wi-Fi network, airlines unable to maximize connectivity across fleets,  difficult integration with key enterprise IT network systems, displaced or misplaced antennas, too many players jostling for a small market, not enough visibility on service level agreements (and the list goes on).

To be clear, NSR’s view is that despite these pain points, the IFC market is poised for strong growth going forward, and NSR forecasts in its Aeronautical Satcom Markets, 6th Edition that IFC is set to  generate $37 billion in cumulative revenue by 2027.  Even in the short term, by the end of 2018, IFC revenues are expected to nearly double, and 50% more aircraft are set to fly with some form of inflight connectivity capability.

If we take a step back to learn how the future could unfold in a story troubled with technical and business stumbling blocks, the long delays of the post Connexion-by-Boeing (CbB) era circa 2006 to 2010 loomed large for broadband satellite aircraft connectivity.  But since the seminal contract to Panasonic to install connectivity on Lufthansa’s wide-body airframes in 2010, more than 3,000 commercial aircraft on 40 different airlines have installed Ku-band satellite connectivity. And these have generated roughly $1.7 B in retail revenues since the first year it was online (2012).

To understand the environment in which this key event took place, NSR cautiously stated that ‘once all testing has been completed and that due diligence will have been done on Lufthansa, the way should be opened for more contract signing for Panasonic and its competitors’. We had also noted that this was a re-birth on what was the most-connected airlines before CbB went dead. The prices were high, and the expectations were high.

At that time, NSR estimated this new airborne connectivity type was to see 2,200 units installed by 2017 and generate just above $1.4 B in the same period.  What happened since then to account for such a difference in in-service units and revenues count?  Why did NSR underestimate the market potential? 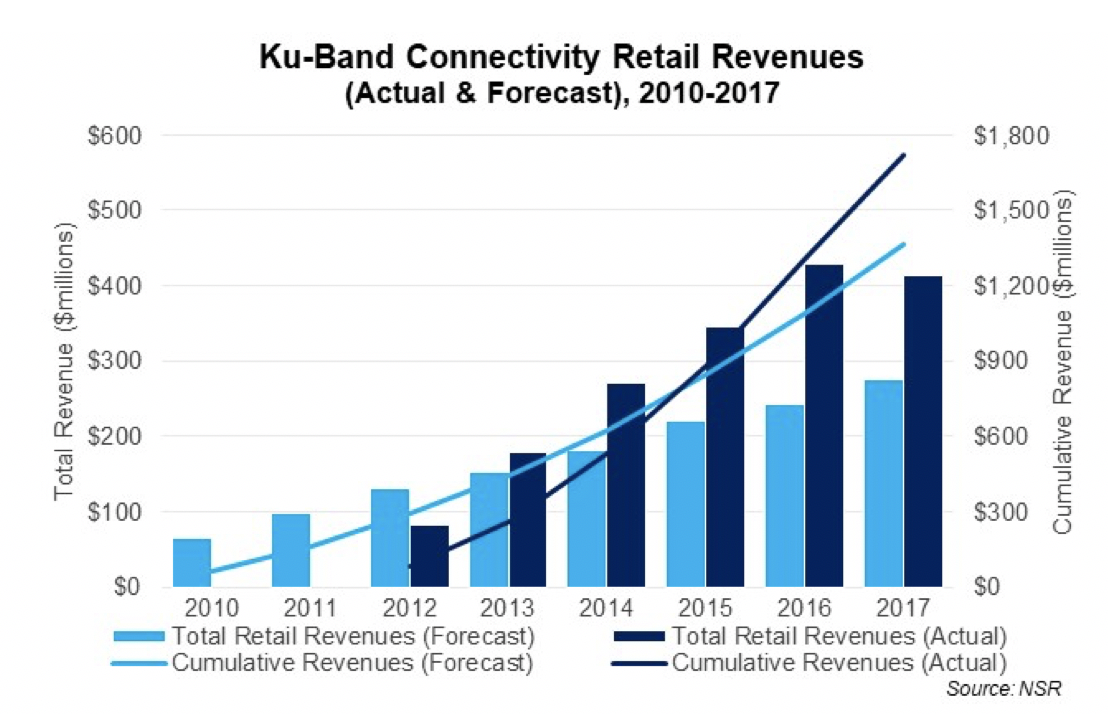 Competitive solutions multiplied, more service providers entered the market, satellite coverage increased globally and prices for capacity dropped.  Not all of this was helpful, but one key element entered the mix: the idea of just how much social media would drive the needs of passengers (in large part millennials) to use IFC while flying across oceans was given low consideration.  Social media abounds today with more passengers demanding a superior experience for airborne Wi-Fi, and the ‘me too’ mindset is also taking hold among airlines.

Still, many airlines delaying or pushing their installations of IFC to the right negatively impacted the market last year.  We expected more aircraft would have IFC given strong backlogs from the likes of Panasonic, GoGo and Inmarsat.  But the bad stories and issues noted above put a ‘downspin’ on the market uptake.

So, is there something not going well with IFC? In this maelstrom of negative reactions and superlatives, it is true the willingness of airlines to spend on IFC is often curbed by confusion due to low awareness of solution capabilities, numerous technological choices and an abundance of capacity supply planned to enter the market, all compounded by insufficient clarity on “what to expect” in terms of quality of service.

But the good health of FSS Ku-band adoption rates continues while a migration to higher throughput solutions in GEO is ramping up slowly, while total aircraft contracted for HTS connectivity is soaring (+41% in 2017).

Thus, it’s not all bad when only one-quarter of all IATA-registered airlines have some form of IFC, and with more demand for global operations and passengers giving rise to more revenues, take rates, ticket sales or increased efficiencies, many strong drivers and market factors point to higher demand for inflight connectivity.

A major wave of HTS capacity with a strong focus on providing better IFC in the next few years will definitely help the more than 75 airlines with passenger connectivity install more on their fleets.  And they will be joined by an increasing number of counterparts that are developing comprehensive strategies and roadmaps around the “connectivity experience” as an integral part of their digital transformation.

Slowly but surely, this will all help support a solid uptake of IFC and clear a path in the ‘right’ direction.