The largest commercial airlines offer inflight connectivity on some portion of their aircraft.  In fact, most of them have some form of connectivity in service or under contract across their fleet, if not on the majority of their aircraft.  However, when global figures are examined, only 25% of all aircraft currently offer IFC.  Given this, a large portion of the addressable market that is flying without a connection is not being tapped today.  How much of that is still ‘out there’, and what’s left to outfit with IFC?

NSR’s Aeronautical Satcom Market, 7th Edition report provided a status check on fleets with IFC. It indicated that roughly 27% of IATA-member airlines offer IFC, which amounts to roughly 52% of all aircraft under contract (installed and planned).  Normally those have the most buying power and thus, have a connectivity partner, and many are on a path to outfit their entire fleet. 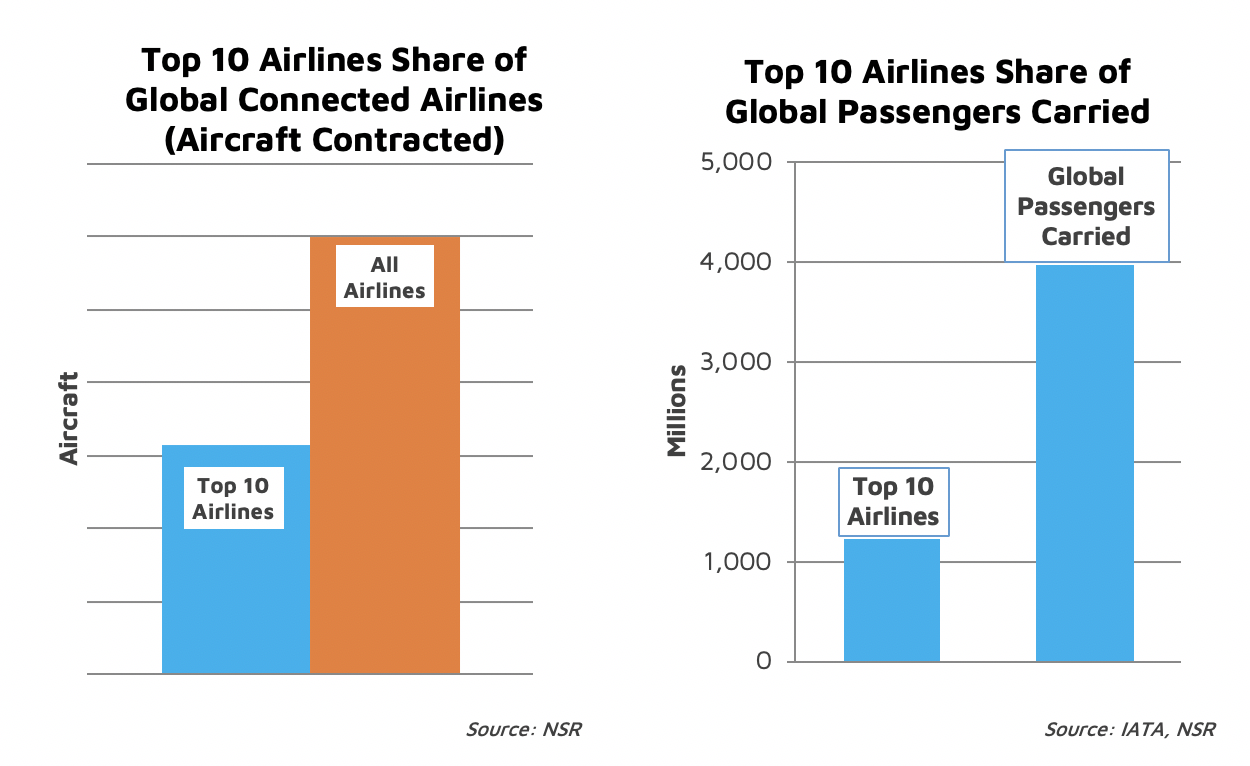 The remaining airlines that have the highest upside are regional airlines and these coincide with the type of aircrafts that have the most upside: narrowbodies.  The trend is not abating as ultra-low-cost carriers (ULCC) who use only these types of airframes, are set to enter the biggest global market, the United States.  True, they fly on average 2 to 3 hours, so monetizing ancillary services such as IFC is trickier. However, some of them have block hours (engine on – engine off) duration of 12 to 14 hours a day, which means 3 to 4 flights per day.  If they carry up to 250 passengers with a load factor of 80%, the total number of passengers daily on each airplane is between 600 to 800. With an IFC take rate hovering at a conservative 8-9% range (or 50 to 70 passengers), at an average $10 per session, this is roughly $500 to $700 per day per aircraft potentially.

NSR calculated an IFC penetration rate of 21% of all narrowbody airframes in 2018, so the untapped demand equals roughly $11 M daily. But, that equates to a 100% penetration rate across the global fleets, which will never happen as short-haul flight demand is too low and some ULCCs are still sitting on the fence as to the need to equip their fleet.  But, this amount over the next decade will not drop substantially (roughly $10.1 M) as the number of new aircraft entering the market counters the number of aircraft connected.  Indeed, NSR forecasts market penetration of IFC on narrowbody aircraft to reach 49% by the end of 2028. 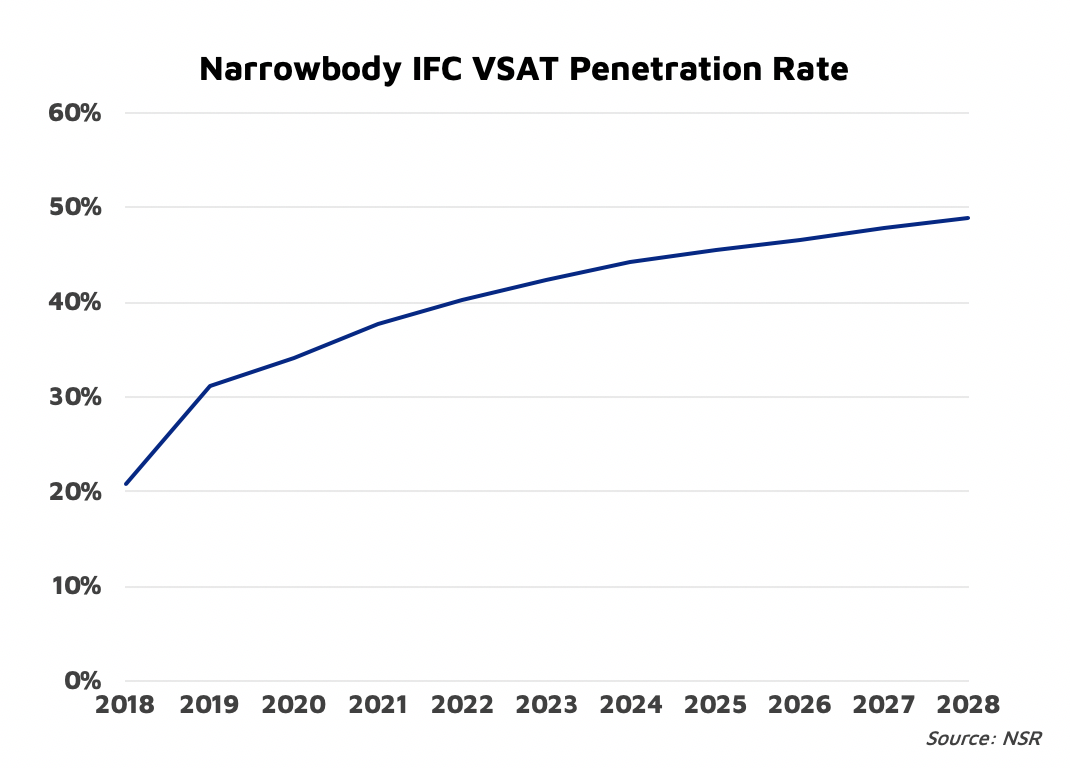 So, if we’re realistic about demand going forward regarding airframes to be outfitted with IFC in the coming decade, namely the 49% in 2028 minus the 21% last year, we get to just below 10,000 aircraft expected to add IFC on their ‘body’.  If we do the same calculation as before, this means approximately $7 M  daily, or a $2.6 B annual opportunity over the next decade.  Depending on how IFC providers see it,  that is either a ‘dry loss’ or a ‘huge wave’ coming their way.

As penetration rates grow, we need to remind ourselves that prices for IFC will come down, bandwidth demand will go up and the ‘opportunity loss’ will not come in one ‘fell swoop’, but rather incrementally. This is why NSR forecasts cumulative revenues to reach $12.9 B over the 2018-2028 period for IFC on narrowbody aircraft. This is a result of the sheer volume of new IFC-enabled aircraft, all carrying on average 200 people with roughly 50 to 70 of them paying about $10 per flight to be connected to the outside world.

The IFC market is still very much in the installation phase with more regional airlines getting into the game. Contracts signed recently with the likes of Spirit, Air Europa, Westjet, Citilink, Finnair, Southwest Airlines, Alaska Airlines and Interjet signal that the ‘rest of the pack’ is looking for more connectivity for their passengers, and that it is an important component of their roadmap and future investments. Suffice it to say, not all those will be tapped, but what remains represents a lot of money on the table and a good potential windfall for players across the IFC value chain.