Home > The Bottom Line > Innovation or Disruption Ahead for Gov & Mil Markets ?

Innovation or Disruption Ahead for Gov & Mil Markets ?

In a few weeks, the satellite industry will gather in Washington DC for the annual Satellite show.  Set in the backyard of one of the largest consumers of commercial satellite capacity in the world, the show will focus on the “What’s New and What’s Next” – a constantly changing conversation in the space industry.  However, the commercial industry has largely left Government & Military players behind.

Some of that is for good reason – Gov & Mil customers are hard to do business with.  Between a complex set of acquisition rules, unique network or security requirements, an ever-evolving mission set, and uncertain budgets – there are significant differences between solution sets. 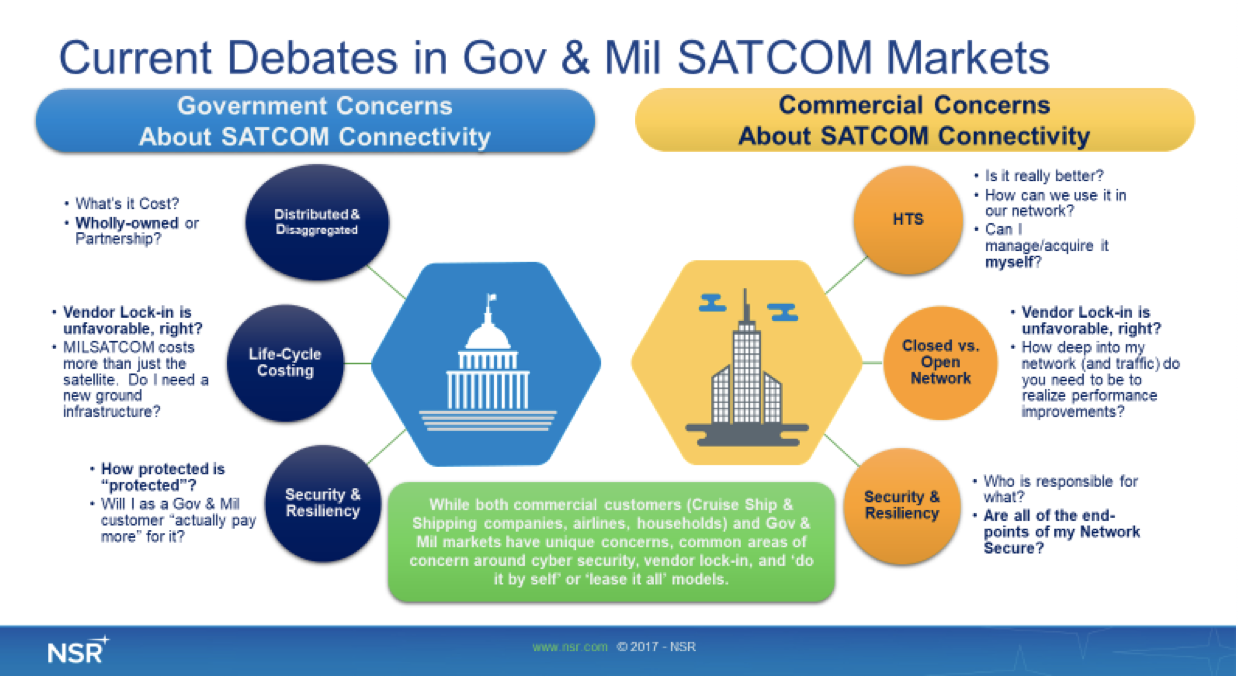 Yet, which current or emerging technology can provide some disruption or Innovation to Gov & Mil Markets?

Today, “Disruption” and “Innovation” are the common bond between incumbents and new entrants. “New Space” players routinely ignore or discount government customers in business cases. Commercial end-users are shifting towards an application-centric view of their network performance – and largely assume that the ‘connectivity part’ just works.  Service Providers are diversifying their revenue streams to include non-connectivity services such as hosted media platforms, Big Data analytics portals, and cyber security solutions.  Satellite Operators are pushing off GEO investments and shifting towards LEO and MEO strategies.  All at a time when Gov & Mil end-users talk of becoming more innovative.

Certainly, innovation is occurring within Gov & Mil SATCOM markets – the Pathfinders from the U.S. Gov are just one example.  Changing laws are hard, changing habits harder.  “Cloud” models are taking hold in other aspects of Government IT – changing mindsets around what it means to ‘own’ something.   Virtualization efforts across the Gov & Mil enterprise are changing technology adoption practices; cheap, flexible, distributed instead of bespoke.   Both are strategies publicly discussed when it comes to future space architectures.  What is unclear is how much of these discussions will become future programs of record or acquisitions.

There is no doubt that HTS, cheap(ening) access to space, and the insatiable demand for data have proven serious disruptors to the status quo of commercial space markets.  What is unclear is if we are on the cusp of a similar disruption in Gov & Mil markets – or if everyone should be planning for ‘innovation’.