Home > The Bottom Line > Ku-band: The Other Side of IoT

Ku-band: The Other Side of IoT

MSS satellite services, and smallsats are generally the main focus for M2M and IoT nowadays, with narrowband applications being well suited to these technology types. However, NSR also covers the Ku-band and VSAT M2M/IoT markets, which currently take up approximately 21% of overall revenues for satcom M2M/IoT. Today we turn to this more niche market, and identify where is this market heading, what’s different with it compared to other technology types, and the pitfalls to be aware of. 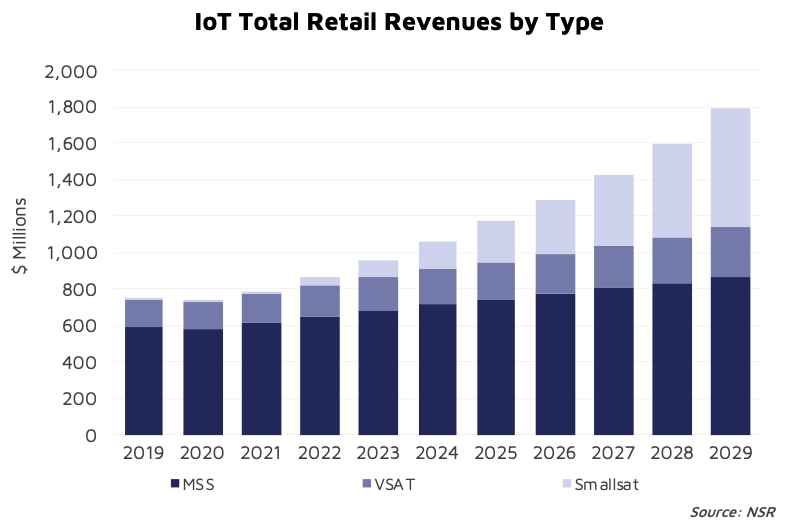 NSR’s recently released M2M and IoT via Satellite, 11th Edition, found that Ku-band and VSAT will indeed grow revenues, albeit more slowly than other technology types. Recent innovations will increase and accelerate demand and revenues in the medium and long term. For VSAT operators looking to repurpose excess capacity, this can provide additional revenue streams, although this will be modest compared to other technology types.

VSAT IoT has a disproportionately large revenue share for the number of units, due to the much greater bandwidth used for applications such as backhauling, big data and data analytics. Consequently, it can appear to be a potentially attractive market to attempt to enter. This is compounded by the fact that there is excess Ku-band capacity in many markets, especially as video markets are no longer the growth center they once were. However, it is important to downsize expectations for Ku-band M2M/IoT growth, as the vast majority of demand will be difficult to tap into from a Ku-band perspective, with most usage going to MSS and smallsat demand, and of course terrestrial solutions where available.

The first key difference with VSAT M2M/IoT is that it is primarily used currently in Utilities, Oil & Gas and Transport & Cargo with respect to dedicated M2M and IoT terminals, and this is not expected to change over the forecast period, although agriculture will see a boost. In the long run, the dynamics will change as utilities becomes the dominant vertical. In fact, 70% of new revenues from the VSAT M2M and IoT markets are derived from Utilities, which is an indication of how already well penetrated the Oil & Gas market segment is when it comes to Satcom connectivity, including hybrid M2M and broadband solutions.

The increased deployment of smart grids and continuing grid modernization efforts is driving this growth within the Utilities segment, and the Asia region is expected to drive the most demand. Even as grid modernization efforts expand, and generation profiles switch towards relatively more remotely located renewable resources, there does not appear to be a strong backlog of projects seeking direct satellite connectivity on a per-asset basis.

One of the drivers of this growth is a result of the continued generation mix towards renewable energy. As additional users come online in the generation market, and as more distributed/remote generation locations are connected, additional revenue sources will come from the management and support of these networks in addition to bandwidth connectivity for M2M and IoT. Although traditional utilities generation continue to grow, there is a shift towards renewable resources, which is driving emerging real-time requirements for robust and redundant connectivity and will continue to expand – this can only be addressed by VSATs for M2M and IoT.

While MSS and smallsat technologies will also be competing with these applications, the introduction of new small satellite constellations does not negatively affect the growth opportunities for VSAT operators. VSATs will target high end markets and smallsats on the low end. 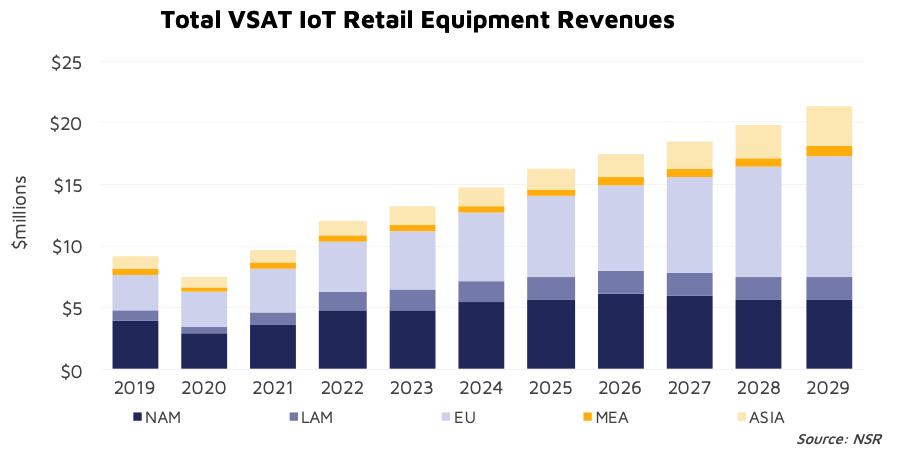 While growth will supplement satellite operators’ revenues, it is the ground equipment side of the market which will see the most disruption, growing to over $20 million in annual revenues by 2029. The VSAT terminal price is significantly greater than MSS. For the energy markets in particular, the aggregation of sensor data, the robustness of terminals in harsh environments, and the greater level of feature requirements result in high VSAT pricing – including those for lower bandwidth use cases such as in pipeline monitoring. For agriculture in particular, terminals with the ability to backhaul via terrestrial networks will be key.

Eutelsat has a two-pronged strategy in this regard, with its Eutelsat First service for IoT over a VSAT for higher bandwidth and fixed IoT use cases, and Eutelsat ELO for very narrowband and mobile applications. Alternatively, companies like HiSky have been developing smaller terminals more suited to mobile use cases which can utilize Ku-band or Ka-band spectrum for higher bandwidth IoT applications (relatively speaking) that do not have the same costs as a full flat panel antenna for a connected car, for instance. However, given the greater cost in terminals, such terminals will be used primarily in high value and niche use cases, and mass market or lower end use cases will go to other technologies. New flat panel antennas do have the potential to grow the mobile market further; however, many of these will be used within hybrid or connected car use cases, which are considered separately.

Put together, Ku-band and Ka-band will have a limited growth path for mobile assets within transport and cargo. While Omnitracs-type satellite solutions have traditionally been popular, many of these units have migrated to terrestrial networks, given the explosion of terrestrial network coverage over the past couple of decades. However, this will change slightly as new technologies come to market.

Utilities will have the largest growth trajectory; however, the focus on this and other applications should be to offer a broader, integrated service incorporating both enterprise applications, and IoT together, perhaps over a VPN. Alternatively, it can also be beneficial to VSAT operators’ bottom lines to form partnerships and offer complementary services, primarily through backup connectivity options, especially in the Transport and Cargo market segment as well as for connected vehicles.

Ku-band and Ka-band M2M/IoT certainly have their advantages, but it is no sure way to ensure revenue growth – with a careful strategy required to target only the intersection of those customers and applications which can truly benefit from a higher bandwidth solution. Despite the large overall M2M and IoT potential, “build it and they will come” does not apply here. VSAT wholesale revenues will aggregate to $131 million in 2029, while VSAT equipment revenues will add another $21 million that same year. Not a pittance by any measure but also not explosive where M2M/IoT becomes a game-changing vertical for the VSAT ecosystem.