Home > The Bottom Line > LEO Launch: The Next Frontier

LEO Launch: The Next Frontier

October 27, 2020 by Dallas Kasaboski | More from this Analyst | Profile

A few days ago, SpaceX launched payloads into orbit for the 100th time. An impressive milestone, the latest launch deployed 60 Starlink satellites into the company’s communication network. From communications to Earth Observation, constellations certainly are a core strategy in the commercialization of LEO. On an almost daily basis, announcements are made regarding investment, deployment, partnerships, research & development of satellite constellations and the supporting value chain.

However, on the other end of the mass spectrum, several announcements have been made recently regarding the launch of commercial cargo & crew to low Earth orbit. This summer, SpaceX launched and landed 2 astronauts to & from the ISS, earlier this month Blue Origin launched cargo to sub-orbit, and while SpaceX was reaching its milestone, Axiom Space was finalizing the details for its first commercial mission to the ISS, set for late 2021.

Given the push-pull between constellations and these inherently higher cost, higher risk missions, it is time to ask, is cargo & crew launch a bubble? Will this market grow beyond government demand? If so, how, and when? 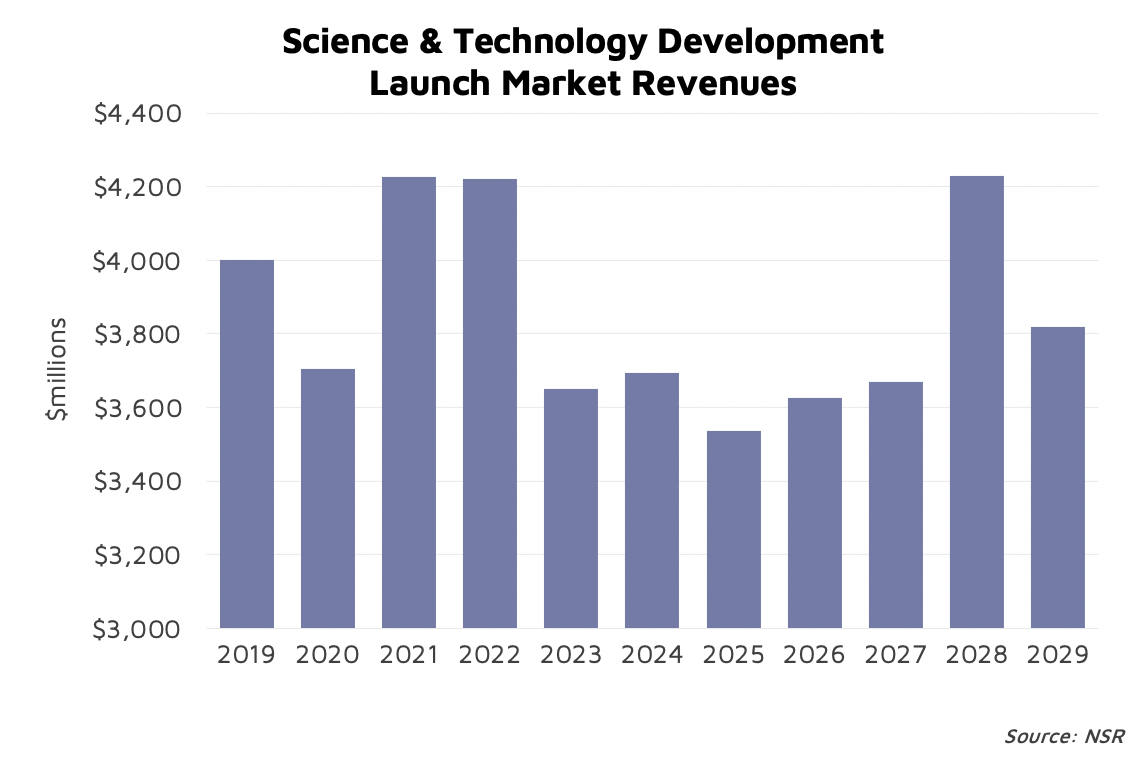 NSR’s Global Satellite Manufacturing & Launch Markets, 10th Edition, forecasts the opportunity for crew & cargo launches to sub-orbit and beyond to generate $258 billion in cumulative manufacturing and launch revenues between 2019-2029. As a result of its inclusion under Science & Tech Dev, crew & cargo missions boost that vertical’s revenue potential, making it responsible for 53% of all forecasted satellite manufacturing & launch revenues over the forecast.

Currently, over 175 missions are planned for the next decade, from players such as SpaceX, the Khrunichev Center’s new Angara-A5, Lockheed Martin, Boeing’s Starliner, and the Chinese Long March 5B. Most of these missions are government driven, both on investment and customer focus, however, this is only the beginning.

Most of the current demand is driven by NASA. Last year, the agency released a commercialization plan for the ISS. This included a new commercial use policy for the station, and allowances for crew and cargo to be launched, docked with the Harmony module. This past April, NASA announced revisions to this strategy, suggesting a stronger need to manage its commercial activities. One of the main programs established was NextSTEP, a public-private partnership model that seeks commercial development of deep space exploration capabilities to support human spaceflight missions. NASA’s NextSTEP is currently aiming to offer $23 million in awards through 2023, if all project milestones are achieved.

However, commercializing space takes time, and the long development cycles and funding required are expected to remain quite challenging. Just last year, NASA’s request of $150 million only received 1/10th of that funding from Congress, and back in March, Bigelow Aerospace laid off all of its employees, citing the COVID-19 pandemic.

Still, the strategic importance of these longstanding government programs is expected to drive government-focused launch in the near-term, while paving the road to addressing the commercial market.

While initially a government-driven market, the commercialization of LEO is well underway. SpaceX’s initial Crew Dragon program, while recently delayed, has already begun serving commercial interest, following Axiom Space’s announcements. Furthermore, given the growing transition of government agencies away from the ISS to deep-space missions, numerous commercial companies have been developing technology and services for low Earth orbit, including Nanorack’s Bishop airlock, set to launch in 18 days, and Axiom Space’s module set to launch by 2024. Finally, while COVID-19 is expected to delay certain programs, NSR expects many lower mass, often lower altitude cargo launches to serve university, pharmaceutical, entertainment and other commercial customers over the next decade. To that end, NSR forecasts North America, Europe, and Asia will be responsible for 44%, 35%, and 19% of the total Science & Technology Development manufacturing and launch market, respectively.

The road to space remains challenging. Launch and manufacturing costs, access and competition remain significant barriers to entry, and many players will feel forced to exit early. However, analogous to most other satellite & space markets, crew & cargo launches are expected to utilize specific, higher-budgeted demand from government entities, to create the technology, policy, and economic framework to serve the commercial market in the long term.