As we enter a new decade, is Government & Military Satellite Communications about to enter a new age of capabilities? With WGS-11 slated to be delivered in the mid 2020’s, alongside new allied capabilities online for similar deployments, is the industry entering a new ‘milsatcom capacity revolution’?

Looking at NSR’s Government & Military Satellite Communications, 16th Edition report, at the end of 2019 approx. 50+ Gbps of dedicated MILSATCOM capacity was available to U.S. & Allied forces. For commercial satellites, that figure stood at approx. 2,200 Gbps of GEO-HTS capacity. Or, for every 1 Gbps of MILSATCOM throughput there is an additional 40 Gbps of GEO-HTS COMSATCOM capacity (roughly 10x WGS-10 class satellites, for context.) So, to simply ‘keep pace’ with developments in commercial GEO-HTS supply, by 2028 MILSATCOM networks should be capable of supplying 480 Gbps of throughput. 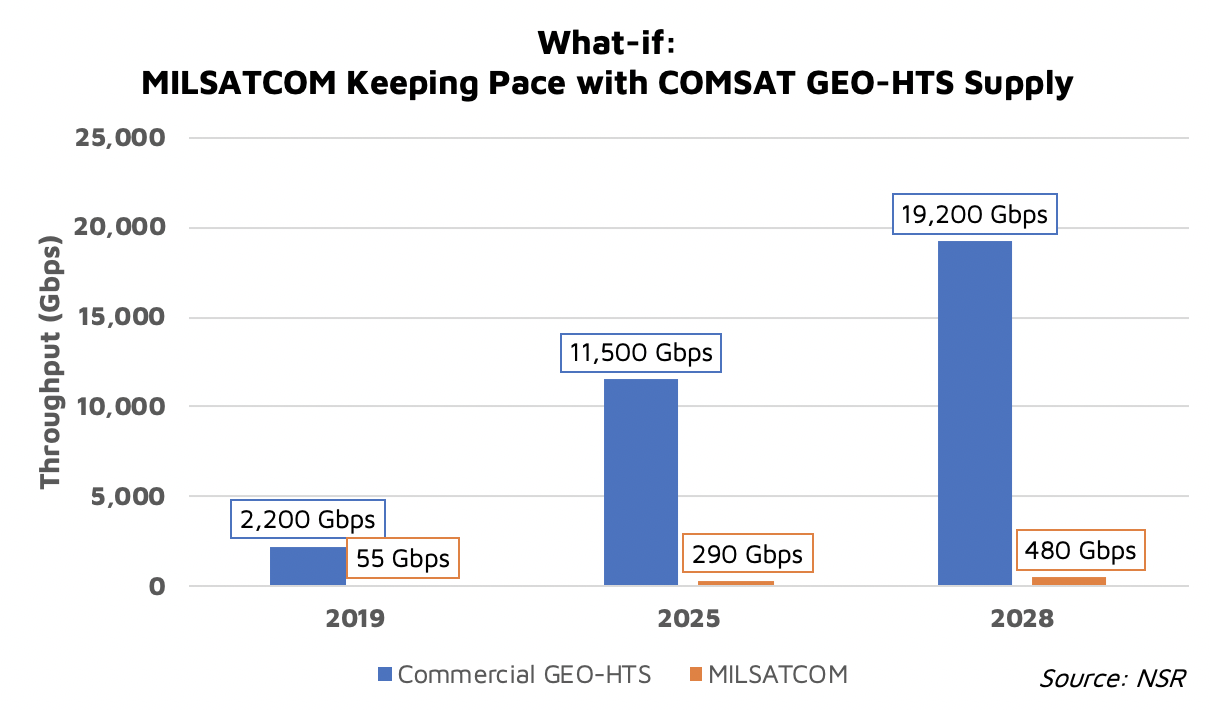 For Gov & Mil planners, that seems like a reasonable benchmark, all things being equal, right? However, with only 6 years between 2019 to 2025, that would represent a huge leap in capabilities on a per-satellite basis for the MILSATCOM market. WGS-1 did provide a significant increase relative to the previous U.S. Gov DSCS network – roughly double the throughput of the constellation it replaced in a single satellite – but these additional new satellites would have to cumulatively represent a 5-fold increase in throughput from today’s systems. Which, even for commercial players, would be a significant jump in per-satellite capabilities – or a lot more launches. 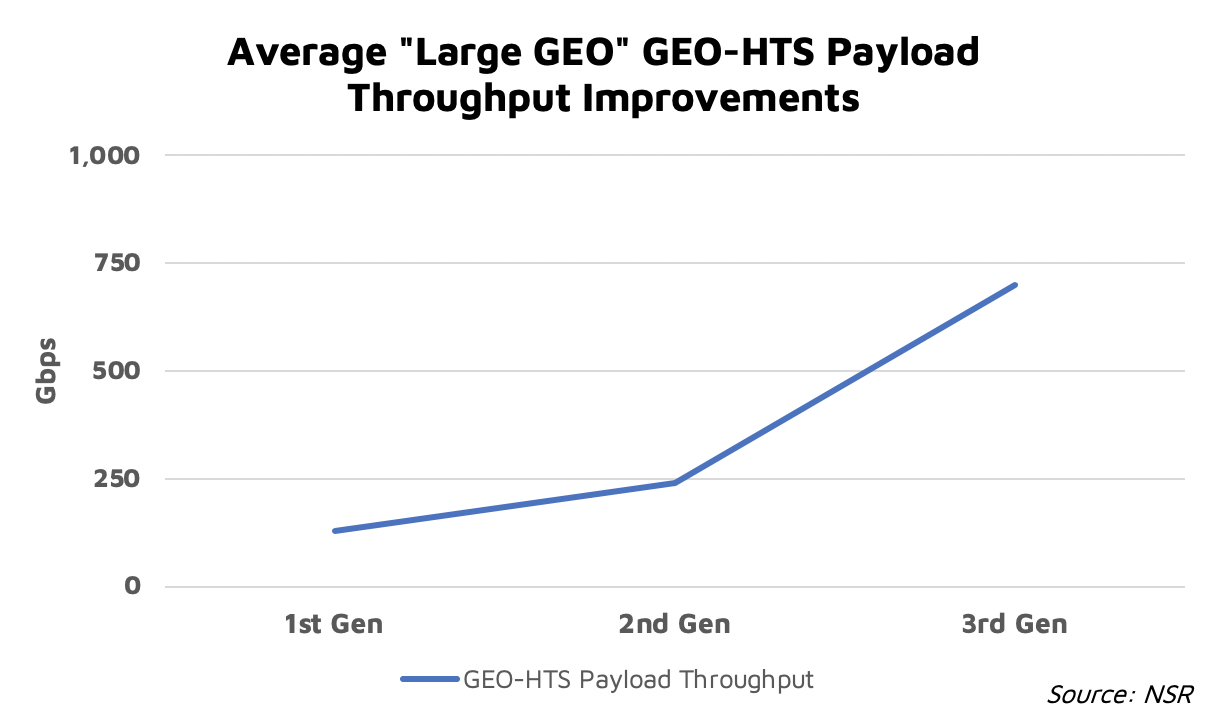 Looking at commercial markets, on average each additional generation of payload improvements yields rough a 2x improvement in throughput. ViaSat remains an outlier in its’ leap between ViaSat-2 and ViaSat-3 programs. For MILSATCOM supply to increase to 290 Gbps from 55 Gbps (and keeping in mind that only a few current satellites are likely to approach their End of Life over this timeframe so fewer opportunities for replacement), it would require a significant change to the current on-orbit MILSATCOM capabilities, or significant adoption of COTS spacecraft and payload. Remember, when WGS-1 launched (~2007), WildBlue-1 & Spaceway-3 both entered services at roughly 10 Gbps of throughput each at around the same time. WGS-10, launched in 2019, also is assumed to have about 10 Gbps of throughput… 12 years after commercial satellites had ’10-Gbps class’ payloads.

By 2028, NSR estimates that total commercial satellite communications supply in GEO & Non-GEO will exceed 40,000 Gbps of throughput – almost doubling the 1:40 ratio benchmark of commercial to military capacity. While Gov & Mil markets are not an ‘either/or’ market – these customers are a critical vertical market for satellite communications – one has to wonder how a (currently) GEO-centric MILSATCOM acquisition paradigm will continue to sync-up with even the GEO commercial markets? 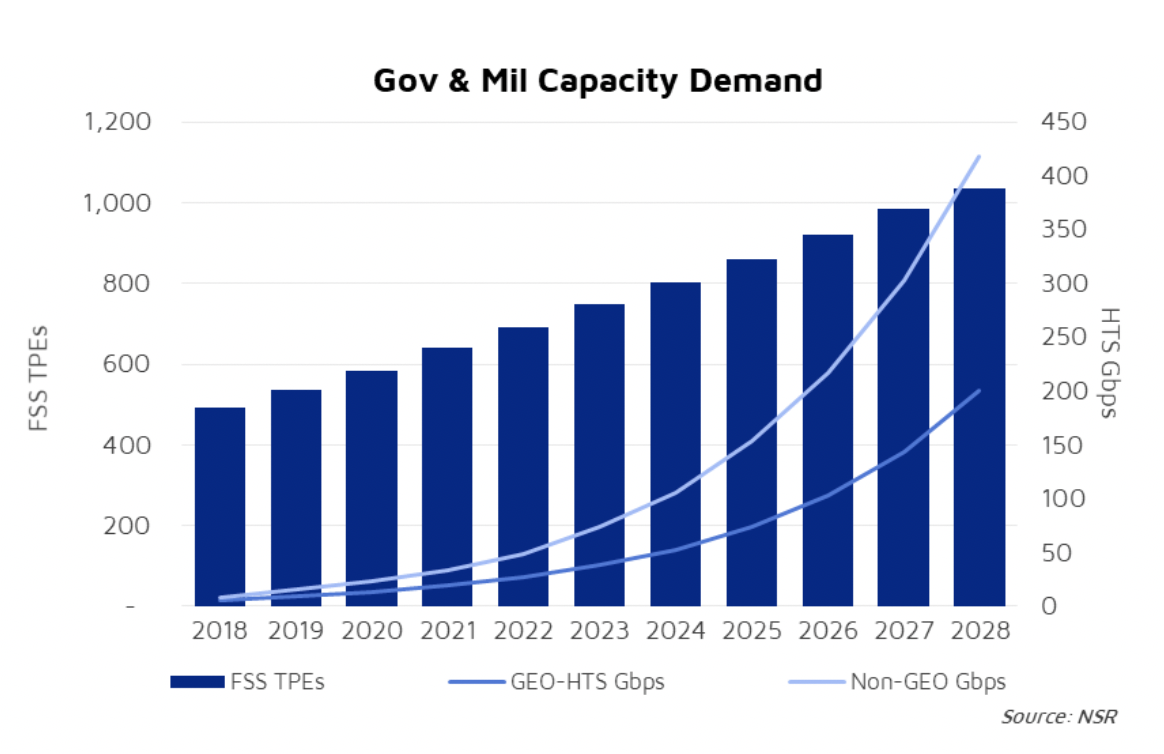 Driven by the increased need for connectivity across Land, Sea, and Air domains, Gov & Mil end-users remain strong consumers of commercial services. Combined with changes in the ground infrastructure to support multi-network, multi-orbit operations (just like the commercial industry has supported for a few years), and the role of commercially sourced services will remain strong, regardless of developments in the MILSATCOM supply markets.

There is no doubt there is a ‘new era for MILSATCOM Capacity.’ However, that does not mean these new satellites will have like-for-like throughput of the ‘best-in-class’ commercial GEO satellites. Nor should they. Just as with the current-generation of MILSATCOM systems, adding capabilities to meet the unique requirements of military operators comes with a tradeoff – throughput. Meaning, more MILSATCOM also means more COMSATCOM and more opportunities for commercial players to provide services to Gov & Mil customers.