Home > The Bottom Line > Orbital Space Tourism: Where Are We?

Orbital Space Tourism: Where Are We?

March 3, 2021 by Dallas Kasaboski | More from this Analyst | Profile

A year and a half ago, Virgin Galactic went public. Since then, the company has generated no “significant revenue”, nothing in the past two quarters, and has pushed the start of their commercial suborbital tourism service to 2022.

Over on the orbital front, companies like Sierra Nevada, Boeing, and Blue Origin, are facing similar delays, technical issues, and contract losses.

Ever since NASA’s plans for commercial LEO development were unveiled in 2019, companies have been eager to cater to government customers in orbit. However, given the very high CAPEX and R&D costs required, combined with these ongoing delays, we must ask, “Are we any closer to a commercialized LEO ecosystem shuttling people on a regular schedule to orbit? What will this ecosystem look like and what will drive it forward?” 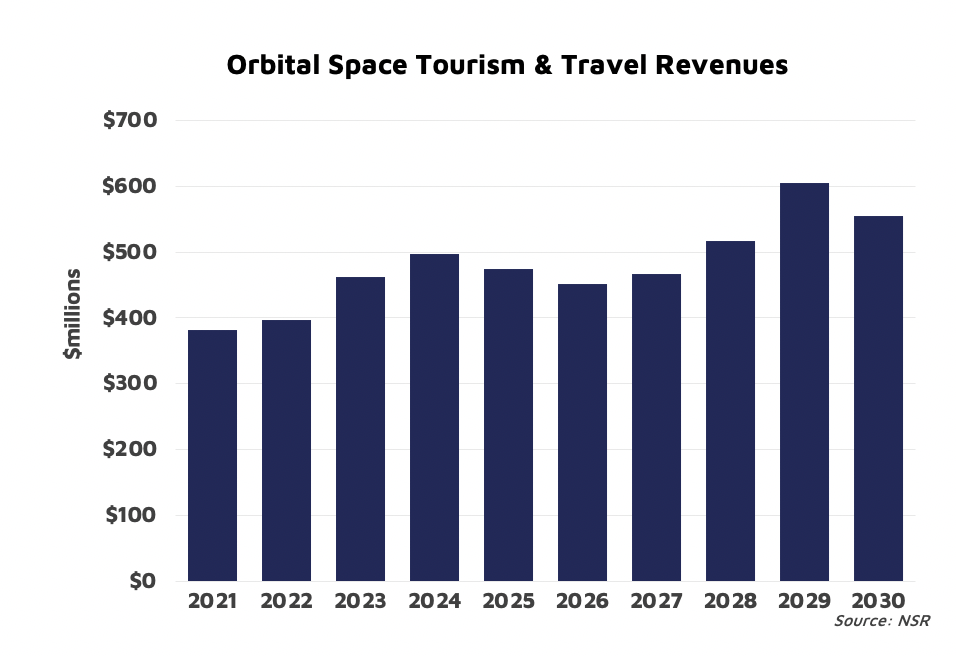 NSR’s Space Tourism & Travel Markets, 2nd Edition report forecasts the opportunity for orbital space travel & tourism services to grow to over $555 million annually by the end of the decade, representing a $4.8 billion cumulative opportunity between 2020-2030. Launch is the near-term focus, but there is a growing ecosystem of service providers, aiming to broker flights, and even, long-term, offer hosted modules in orbit. By 2030, NSR forecasts that 61% of all orbital tourism revenues are expected to come from service providers.

It should be no surprise that government customers and funding are driving the developing orbital travel & tourism industry. Launch is the main service, and the high costs of developing human-rated vehicles bars most players from entry. Additionally, as commercial players draw on the heritage and expertise from the public sector, the main opportunity in the near-term will be in commercial launch for astronaut crews, such as SpaceX’s successful Crew-1 liftoff back in November. Space agencies from Member States of the ISS are still planning to have crews until the orbital laboratory is retired and thus offer the most ‘stable’ roster of flights.

However, while many nascent industries often find themselves tethered solely to government anchor tenant customers, the commercialization of orbital travel is already underway. SpaceX is planning to launch the first civilian crew later this year, and Axiom Space has booked flights for both tourists and their own private astronauts over the next few years. At the same time, Space Adventures, the longstanding ticket broker who facilitated the first tourist flights to the ISS, purchased more trips on the Russian Soyuz, set to fly in 2023.

Given the high price tag of $55 million per ticket, NSR sizes the addressable market of willing and able passengers to only ~50 people per year, growing as prices drop through subsidy or competition. However, there remains one additional opportunity that could literally expand the market: space stations.

Space Stations are Next

Besides launch, accommodation via an orbiting platform is the next main opportunity for orbital travel & tourism. One idea has included the possibility of turning the ISS over to the commercial sector, though timelines and decisions have shifted several times on that front.

While tourism is one potential service, most companies involved have indicated a strategy of focusing on the private research sector, of allowing companies an opportunity for science & engineering on-orbit.

Orbital travel & tourism is an exciting market opportunity, but like all nascent industries, it is crucial to consider the challenges ahead. Government customers will likely continue to take priority for tech and mission development in the near-term, and there have been ample delays and failed tests so far in this market. Launch costs are very unlikely to come down significantly, except through government subsidy or if supply grows significantly. Commercial orbital platforms and hotels are very ambitious, unproven, use cases, that are very sensitive to changing market dynamics; remember, Bigelow Aerospace laid off its entire workforce last year.

However, government customers are driving the development of the commercial sector, and that is already expanding to serving a wider commercial market. Investment and demand will continue to grow, especially as technological capabilities and competition improve. Orbital tourism has a long road ahead, but the diversifying opportunity and growing capability should help to drive the market forward.