Home > The Bottom Line > Race to the Moon: Will SpaceX be Enough?

Race to the Moon: Will SpaceX be Enough?

December 14, 2022 by Dallas Kasaboski | More from this Analyst | Profile

This past Sunday, NASA’s Artemis I mission splashed down in the Pacific Ocean. It was an historic occasion, both the 50th anniversary of the last human lunar landing, as well as a milestone marking the beginning of NASA’s return to the Moon. Days before, Japanese billionaire, Yusaku Maezawa, revealed his 8-person crew to accompany him on SpaceX’s dearMoon mission, to perform the first commercial lunar fly-by and return mission sometimes in 2023.

Excitement for the Moon is high, with one NASA official recently claiming that astronauts will live and work on the Moon by 2030. However, in light of ongoing delays, funding, technical, and certification issues, such claims seem to be overly ambitious.

Given the interest in returning to the Moon, from NASA, the 21 countries who signed the Artemis Accords, and ongoing commercialization efforts from SpaceX, Blue Origin, Lockheed Martin, Boeing, and others, and given the significant challenges ahead, one must ask, “What does the human space travel market look like, will we return to the Moon, and how will we get there?” 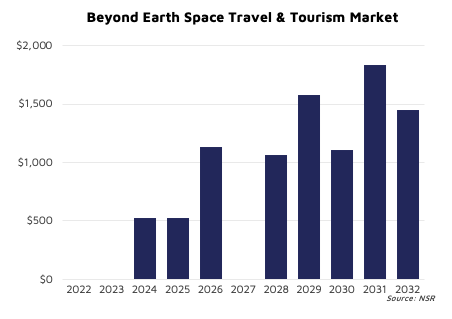 NSR’s Space Travel & Tourism Markets, 4th Edition report forecasts the opportunity for flying passengers beyond Earth, on commercial vehicles, to exceed $9.2 billion by 2032, with nearly 90 astronauts, researchers, and tourists to be flown. These revenues only cover ticket sales, whose prices are expected to average $100 million per person over the decade, but does not directly include R&D costs, grants, or awards. Significant commercial effort has been underway for the development of spacesuits, launchers, capsules, and landing systems necessary to support these flights.

NASA’s destination of choice has flip-flopped between the Moon, Mars, and back again over the last few administrations. With the nearer target set in sight, exploration is now half of the main goal, the other half being sustainability. Rather than a simple flag-planting mission, NASA’s Artemis program aims to create a long-term, sustainable, human presence in deeper space and on the Moon. In order to do that, NASA accelerated the typical market development process through the CLPS program.

Generally, expensive, ambitious, emerging space efforts are first developed by governments serving governments, and only through competition, raising technological capabilities and standards, and lowering prices, is the commercial market able to better serve. However, the CLPS program, directly calling for and supporting commercial efforts, has expanded the opportunity to over 250 missions, generating $105 billion in revenues for the Moon market over the next decade. Most of those involve the development of cargo, landers, rovers, and infrastructure, but what about space travel & tourism?

Aside from NASA’s SLS, SpaceX’s Starship is the only other vehicle available, or almost available. Despite having only conducted test flights, the last 5 of which resulted in fire, damage, or overall destruction of the vehicle, Starship is slated to be next in line to offer flights to the Moon, for both government and commercial passengers. The choice makes some sense, given SpaceX’s ongoing capabilities in orbit, effectively becoming the sole western provider of human space launch. While there are others in the running, none are ready, and decisions are not expected until late 2023 at the earliest.

NASA and SpaceX are driving this market. NASA’s lunar ambitions are clear, with the Artemis program defining the goals and cadence of the next decade in the drive to have humans back on our lunar neighbor. To help facilitate those missions, the commercial sector has been almost fully tasked, with SpaceX leading on the human transportation front. Understanding this situation is key to evaluating how future missions will be priced and served over the decade. Research and development for human spaceflight is very expensive, and SpaceX has undergone several rounds of fundraising this year alone to principally fund its Spaceship rocket that will take a leading role in these missions. Given the importance, high safety requirements, technological challenge, and effective market monopoly in providing flights beyond Earth, SpaceX is in a position to define price. Coupled with the financial and technological challenges plaguing SLS and associated technologies, NASA may find itself at the whim of a sole provider, again. 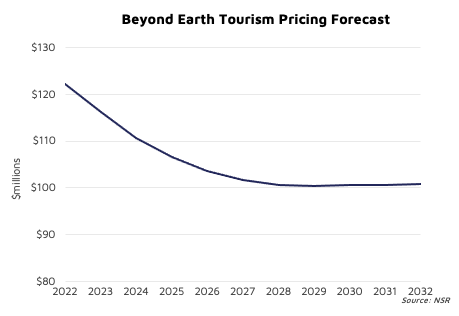 Examining the development in orbit, NASA has, so far, awarded SpaceX with $4.93 billion for the development of Crew Dragon, and flights 1-14 to the ISS. Approximately, 84% of which went toward the first 6 flights, making each cost around $689 million per flight, or $172 million per astronaut. However, most of that was for development costs, and once viability was proven, and more contracts awarded, prices dropped to ~$266 million per flight ($67 million per astronaut) for Crew Dragon missions 7-9. With the latest round of Commercial Crew funding, prices average $280 million per flight ($70 million per astronaut) for missions 9-14. This process, of highly government-subsidized development of vehicle and mission, eventually leveling out even as competition lags behind, is expected to be the path forward for Starship as well. NSR forecasts that such prices will average $122 million per astronaut for Beyond Earth flights, in the near-term, dropping to an average of $105 million by the end of the decade. While government passengers will be the majority, commercial passengers are already on the launch manifest. Here, NSR assumes that much of the high-ticket prices will be absorbed through the subsidization of government missions, resulting in a cheaper ride for tourists.

While it may seem odd to charge more for your anchor tenant, NASA’s own long-term plans support this assumption. Contrary to the Apollo program, which was mostly a race for technological prestige and superiority, Artemis is aimed at sustainable human presence in space. As such, NASA is aware that no one government can solely support such an ecosystem, and that even governments may not be enough. Hence the development of the Artemis Accords, and the CLPS program, and hence the assumption that stimulation of the commercial sector is vital to supporting sustainable lunar activities.

The first few Artemis missions are to be SLS-led, with SpaceX to support mostly through landing infrastructure, via a modified Starship vehicle. After the first few Artemis programs are completed, demand is expected to grow, as more countries, research companies, and organizations wish to expand human presence in space. However, sustainable flights to the Moon are still very far away.

While Artemis I’s splashdown was near-perfect, its launch suffered several delays. The avionics boxes were originally designed to be expendable, and for Orion missions to Mars. Salvaging and refitting them will reportedly take 2 years. The mobile launch tower to support SLS launch is still only in the “planning stages”, despite nearly $1 billion in investment. Starship has not earned certification to fly beyond Earth orbit, has not even launched properly, with several tests concluding in a fiery spectacle. Competition is not ready, as Boeing has not been able to get Starliner into orbit yet, and Blue Moon, Jeff Bezos’ heavy launcher from Blue Origin, will only begin competing for tender later next year; again with no previous in-orbit demonstration of capabilities.

Not to fail to mention that, for all the prestige of the Apollo program, the risks of long-term lunar settlement are not fully understood, or can be mitigated against. Lower gravity affecting muscle and bone structure, radiation from being outside the protective magnetic field of the Earth, and the additional logistical challenges of serving astronauts on the Moon rather than orbit, are dangerous obstacles to overcome.

In evaluating this market, NSR considered the challenges above, but contrasted that with the tremendous drive and experience from the players involved. NASA has set the Moon as its target, and significant funding has been secured to reach it. Rather than going it alone, the inclusion of the commercial sector via CLPS, and other nations via the Artemis Accords (including ESA which just boosted its overall 5-year budget by 17% from three years ago), provides confidence that this market will develop, just more slowly than headlines tend to indicate.

As such, NSR forecasts that Starship will not lift off toward the Moon before 2024, and that SpaceX’s first few launches here will focus on Artemis missions. After which, flights are expected to expand, served by SpaceX and others, as the government-led lunar base is established, eventually, in the long-term, expanding to include private astronauts and the occasional “tourist” as well.

The race to the Moon is underway, and the recent Artemis 1 mission served as the first step on the way there. With nearly two dozen nations, several major manufacturing and launch primes besides SpaceX, and billions of dollars of investments, the Artemis program, while not too big to fail, certainly has the support and momentum it needs to move forward. Delays, audits and technical challenges must not be discounted; they are inherent to the industry and have already pushed the program back later than originally expected. However, efforts are well-supported, and the Moon stands as the next greenfield market opportunity for satellite & space.