Home > The Bottom Line > Repurposing Spectrum for 5G: Where Is the Balance?

Repurposing Spectrum for 5G: Where Is the Balance?

September 3, 2019 by Lluc Palerm | More from this Analyst | Profile

Mid-band spectrum (3.5-6 MHz) is regarded as essential for fast, widespread and efficient deployment of 5G. C-Band (3.7-4.2 MHz) is part of this band and as such, it is highly desired by would-be 5G carriers. C-Band has been historically assigned to satellite services, but some regulators are repurposing (or planning to do so) the spectrum for 5G. While some regions like Western Europe make light use of C-Band, other areas like the U.S. and Asia heavily rely on this band. In the U.S. alone, there are 120 million households dependent on C-Band for reception of programming content. The interests of these consumers and the billions of dollars that they represent in the economy need to be protected. How much C-Band spectrum can then be repurposed to unleash the potential of 5G, but at the same time avoid disrupting current C-Band users? 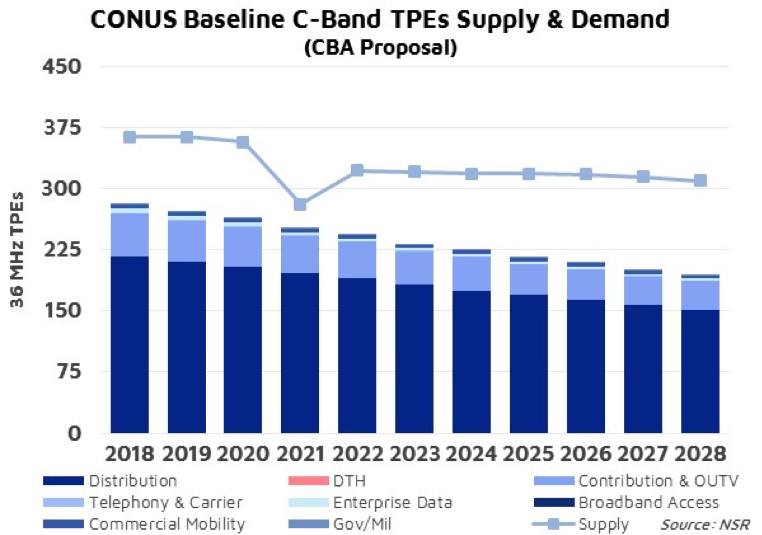 Acknowledging the current legal framework, the fast path to free up spectrum and the detailed plan to protect current users of C-Band, it seems logical to conclude that the FCC will adopt the main guidelines of the C-Band Alliance’s proposal. According to NSR’s U.S. C-Band Repurposing for 5G: Impacts and Analysis report, up to 400 MHz could be repurposed in the next 10 years in several steps. But first, it will be useful to lay out the different spectrum requirements, the Satcom supply-demand dynamics and technology trends influencing spectrum repurposing.

How Much Mid-band Spectrum is Needed for 5G? (and when?)

Mid-band spectrum offers an optimal compromise between coverage, throughput and capacity required to meet the promises of 5G, and regulators globally have started to allocate mid-band spectrum for 5G rollouts. The range of spectrum auctioned at this stage is generally in the 200-300 MHz range. From 190 MHz auctioned in the UK, 200 MHz in Italy, 280 MHz in South Korea or 300 MHz in Germany, the outlier seems to be China with 460 MHz assigned (at no cost for the MNOs).

One must also bear in mind that, despite the buzz around 5G, many operators are still cautious about spending heavily on CAPEX for network rollouts as business cases remain unclear. Suffice it to say, money invested on spectrum is money lost for actual infrastructure deployment. Consequently, auctioning large chunks of spectrum do not necessarily translate to a faster roll-out of 5G, as MNOs will have fewer resources to invest on infrastructure.

Additionally, based on the experience on current mid-band auctions, the price paid by MNOs seems to be more related to the inner dynamics of the auction process and the convenience of the slicing of the spectrum rather than the quantity of spectrum available. It is remarkable how markets with similar market potential (maturity, GDP per capita, etc.) such as Spain and Italy ended up with wide price differences when the same quantity of spectrum (200 MHz) was auctioned (Italian MNOs paid $0.40 per MHz pop compared with $0.06 per MHz pop paid in Spain). The urgency to repurpose mid-band spectrum in the U.S. is clear, but in order to optimize 5G deployments, it would be much better to have a transparent paced repurposing plan with increasing amounts of spectrum than releasing a large chunk of spectrum at once, forcing MNOs to spend big money on spectrum (rather than on infrastructure) and disrupting the entire C-Band Satcom ecosystem.

Satcom C-Band in the U.S. continues to generate high levels of demand today, most prominently from Video Distribution. Having said that, independent of the uncertainty coming from spectrum reallocation, NSR forecasts a steady decline in the levels of demand. UHD is not ramping up as quickly as envisioned. Moreover, enhanced transmission (DVB-S2X) and compression (HEVC) standards reduce the amount of bandwidth required per channel transmitted. Furthermore, rationalization of channels due to simulcast and pressure from OTT generate continued declines in Video demand. In parallel, data verticals are rapidly migrating to more efficient HTS satellites.

Fill rates continue at fairly high levels, around ~75%. This means that repurposing big chunks of C-Band could easily distort the supply-demand equilibrium and consequently negatively impact current C-Band users. NSR believes repurposing 100 MHz could be achieved without incorporating any additional satellite supply, only modifying ground stations (filters, moving channels to other frequencies, etc.). Consequently, this could be done fairly quickly in line with the C-Band Alliance’s plans. Going beyond that would require more complex measures.

One must bear in mind that the larger the segment of C-Band reassigned, the less effective it would be to launch additional satellites to compensate supply. If there is 300 MHz of C-Band left for Satellite services (200 MHz of the 500 MHz repurposed), each additional satellite would be able to compensate for ~14 TPEs (considering dual polarization and typical guard band between transponders). Repurposing 300 MHz (200 MHz stay for Satellite services), would not only mean that 60% of current available supply would become unusable (currently available supply would drop to ~140 TPEs while demand would stay at ~250 TPEs), but each new satellite launched could only compensate 10 TPEs. This means that 12 satellites would be required to ensure enough supply is available, which doesn’t seem feasible to procure and launch in the 36 months proposed by the C-Band Alliance. Consequently, repurposing 100 MHz in the next 18 months and another 100 MHz in the next 3 years seems to hit the right equilibrium between accelerating 5G deployments with today’s needs and protecting current C-Band users.

Technology to the Rescue

Is it possible to match the Chinese allocation of 480 MHz in the mid-band spectrum? While this would entail a major revision of the entire Satcom C-Band ecosystem, NSR believes it is possible to repurpose up to 400 MHz in a phased approach over the next 10 years. NSR estimates that the majority of channels transmitted today still make use of legacy transmission and compression technologies and adopting the latest standards (DVB-S2X and HEVC) could potentially mean bandwidth savings of up to 50%. However, this would require a major upgrade of the entire Satcom ground segment with the consequent costs and time required to implement the change.

After the initial 200 MHz proposed by the C-Band alliance has been repurposed and the planned additional Space assets have been deployed, repurposing another 200 MHz would necessitate the majority of data users to move to other architectures like HTS (which is happening naturally and operators would only need to accelerate this process) and upgrade Video equipment to be compatible with DVB-S2X and HEVC standards. The final piece of the puzzle is to implement a similar process to add filters and retrofit Earth Stations to work with the new frequencies assigned.

In order not to lag behind in the race to 5G, the U.S. needs to urgently make mid-band spectrum available for MNOs to start rolling out infrastructure. However, auctioning large amounts of spectrum immediately doesn’t translate to faster network rollouts, as MNOs would have fewer resources for investments on those rollouts.

Satcom C-Band is still in high demand today where its current users and the economic impact it generates need to be protected. There are 120 million households that depend on C-Band for receiving programming content today.

The C-Band Alliance’s proposal to repurpose 200 MHz in the next 36 months seems to be the right balance between accelerating 5G deployments with today’s needs and protecting current C-Band users. NSR also believes it is possible to repurpose additional portions of the band further down the road, applying the newest technologies and standards.