2018 emerged as an understatement compared to the hype generated by satellite operators. Revenue didn’t rebound according to expectations, pricing and backlog both declined across operators, and video finally showed no signs of further growth, as multiple operators posted revenue declines in video even with marginally increasing demand.

Looking downstream, suffice it to say that service providers had a marquee year, extending growth into crucial aero and consumer broadband segments, with maritime and backhaul a close second. This growth, while coming at an expense of loss of EBITDA margin, as discussed in NSR’s Satellite Industry Financial Analysis, 8th Edition report, is a tell-tale story of market expansion and high Subscriber Acquisition Costs in the satellite market. Finally, with a 2019 capacity pricing decline expected to be similar to last year, high efficiency modems, vertically integrated business models and with the market starting to show high(er) take up rates, the EBITDA trend is expected to finally reverse in 2019. While Hughes and Speedcast have consistently showcased improving margins, focus remains on aero-heavy service providers as they shift to satellite ownership business models to post a profit. 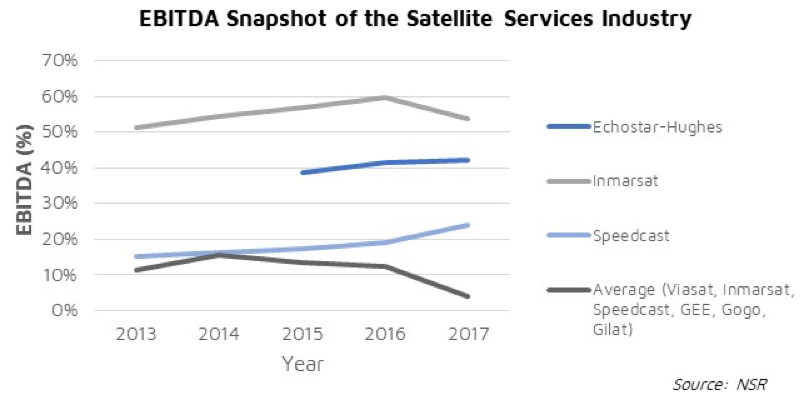 Ground equipment sales have also been bolstered over the past year with the outlook remaining strong in the near term. Closed partnerships with satellite operators and opening/focusing on a service business division will give vendors a competitive advantage in the longer run, with sales expected to consistently grow on account of high upgrades in the VSAT market.

Based on strong market forecasts in segments such as Broadband, Aero, and Maritime, global service providers can be expected to approximately double their revenues in the next 4-5 years, considering the current growth strategy, via organic or inorganic means. Lease markets strongly contrast this trend, with most operators expecting a decline in lease revenues in the near to medium term, owing to the latest fleet renewal that cannibalizes legacy FSS fleets on a pricing basis in both video and data verticals. 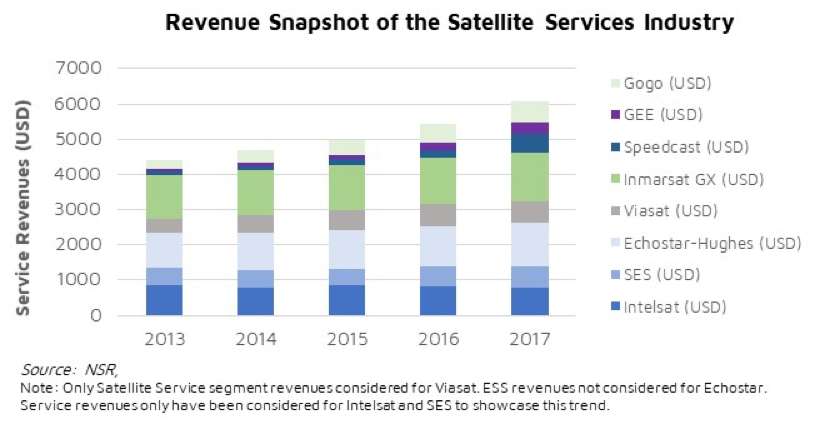 The decline in HTS Global Mean Index Price also is expected to favor service providers as $200/Mbps/month spot price contracts become increasingly common. Thus, 2019 is expected to have a higher focus on the service revenue lines, with most operators gunning for a 20-25% managed service share in total revenue by 2021. That said, 2019 remains pivotal for most operators to implement the distribution effectively, and in turn, optimize their own organizational structures.

Apart from the lease vs service debate, several trends remain to be witnessed in 2019, such as:

Strengthening top line revenue (albeit at the expense of EBITDA) remains the top concern for most operators in 2019, along with posting gains in Net Debt/EBITDA and ROCE ratios after the interim CAPEX cycle has ended. Analysts will closely observe the EV/EBITDA performance (in spite of gains from the C-band alliance proposal) and free cash flow availability to judge future possibilities on vertical consolidation. Emerging regional leadership positions with new HTS launches can be expected with the declining trend on pricing, with new asset consolidation partnerships to boost efficiency on the operator’s side. Improving EBITDA margins remains the key focus in the downstream segment (with ever increasing SAC), with the addressable market opportunity clearly favoring the service business models.