May 23, 2019 by Shivaprakash Muruganandham | More from this Analyst | Profile

While the optical satcom market is far from being established, there is a healthy dynamic of early stage and emerging startups/companies using lasers to address the data downlink bottleneck, as well as inter-satellite links (ISLs) in proposed mega-constellations. The advantages of optical communications as a technology and the problems of link availability are often cited in comparison to traditional satcom, with particular depth devoted to the high security and bandwidth of optical beams. However, the question of how lasercom will fit into the larger satcom ecosystem is much less discussed, as is the total cost of ownership of a laser terminal/link as opposed to an RF solution. 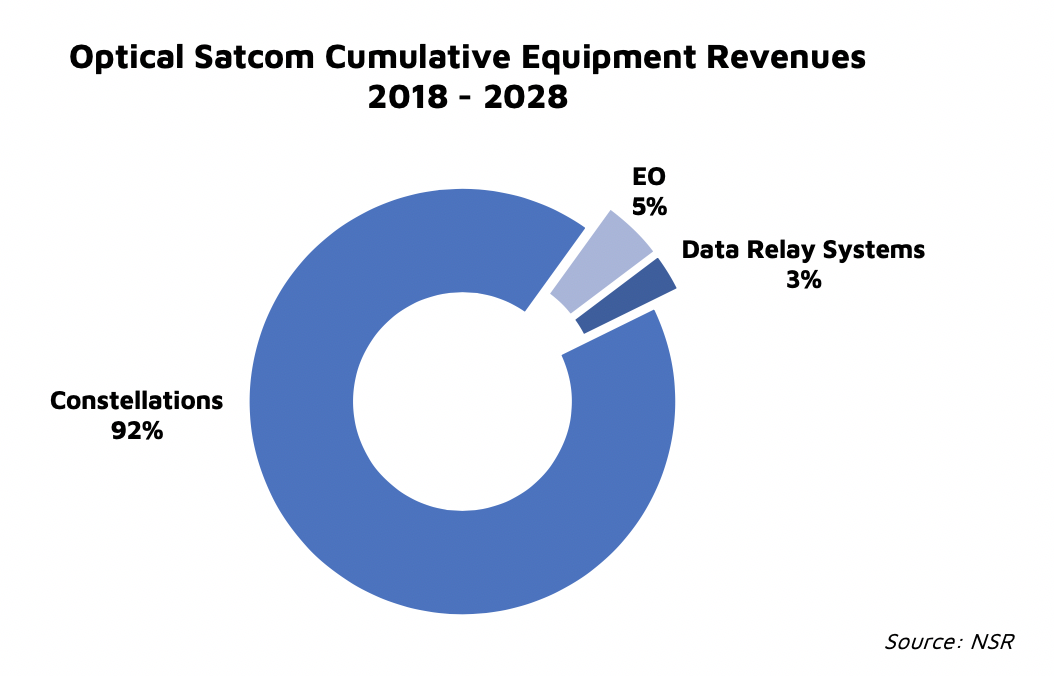 According to NSR’s Optical Satellite Communications report, more than 11,000 LCTs are expected to be deployed cumulatively by 2028, generating nearly $4 billion in revenues. While more than 90% of this market will be driven by LCT manufacturers securing initial contracts with upcoming mega-constellations, the fact that lasers excel in point-to-point communications will pave the way for optical satcom in the Space-to-Ground downlink market via data relay systems or direct-to-Earth datalinks from sensor data payloads, of which Earth Observation (EO) applications make up the largest share. This is expected to become increasingly crucial as next generation high revisit/high resolution EO systems come online.

LEO constellations offer a pure volume-play for LCT equipment vendors, who can target this market by ramping up serial production capabilities, accelerated via partnerships or the adoption of heritage technology. On the other hand, the data downlink market has more moving parts, with service providers tackling the space-ground data transport problem in multiple ways.

Earlier this month, for instance, NASA’s Space Communication and Navigation (SCaN) program selected 8 companies to study space-based relay system partnerships and practices. ATLAS Space Operations was the sole small business granted this study, as part of the Empower Space Alliance to investigate future RF/optical satcom systems. And across the pond, we have already seen a PPP success story for optical satcom: the European Data Relay System (EDRS), that has provided data relay to the Copernicus program through Airbus’ SpaceDataHighway.

While the engineering considerations of such undertakings are well established, particularly as it pertains to availability of an optical DTE link due to atmospheric and cloud cover effects, the market considerations are much less discussed: availability of ground stations will be a key enabler for site diversity, for instance. It is important that alongside technology innovations, newer business models that ensure manageable operating costs are brought into the mix to meet the long-term demand for downlink services. And this is reflected in the industry: optical ground station networks are only one of several new proposed business models in the move towards offering economic downlink services: complementary approaches such as the leveraging of unused antenna time across a network and phased array antennas could provide potential alternatives to customers.

As in-space data generation capabilities improve, downlinking via lasers is expected to play a significant role in easing up the bottleneck that currently exists within RF data pipes. Multiple players in recent years have emerged proposing commercial downlink services, via proprietary/virtual ground station networks or in-space data relay assets – both of which are critical elements in closing the data transport link from space to the ground.

Despite the fact that laser communications will play only an emergent role in downlink services, itself dominated by RF, companies will need to identify and offer cost effective services to potential customers, taking into account operational experience, access to licenses, access to capital and existing (RF) infrastructure.