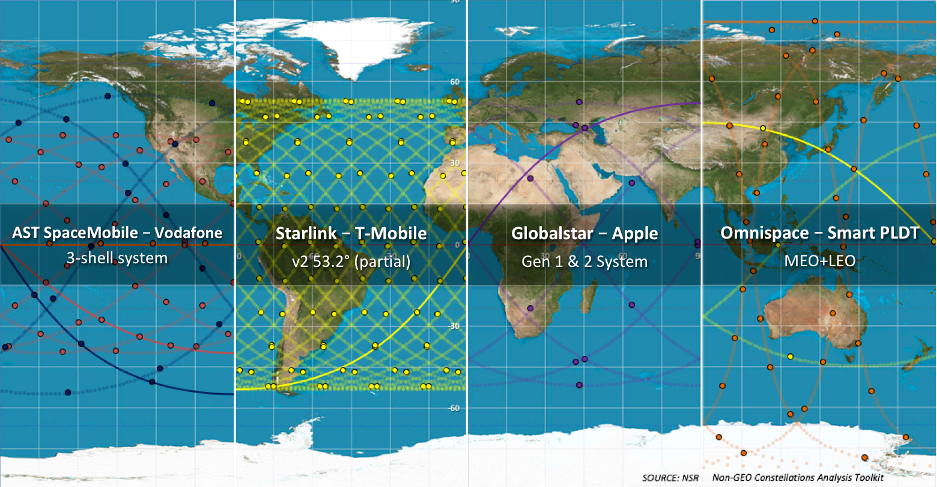 The collaboration agreements announced by SpaceX, T-Mobile, Apple and Globalstar reinforced the notion that LEO satcom is on the brink of mainstream adoption. Satellite operators AST SpaceMobile, Lynk and Omnispace are also advancing in partnership with mobile network leaders like Vodafone, Nokia and AT&T. Unlike technically proven (FSS-band) LEO-HTS satcom constellations requiring communication terminals, these new initiatives aim to deliver on the promise of direct satellite-to-regular-handset communications through cellular and MSS spectrum in areas unreachable by existing cell towers. Yet, architectural facets drive a wide set of capabilities ranging from asynchronous emergency texting to continuous voice and broadband data connectivity. 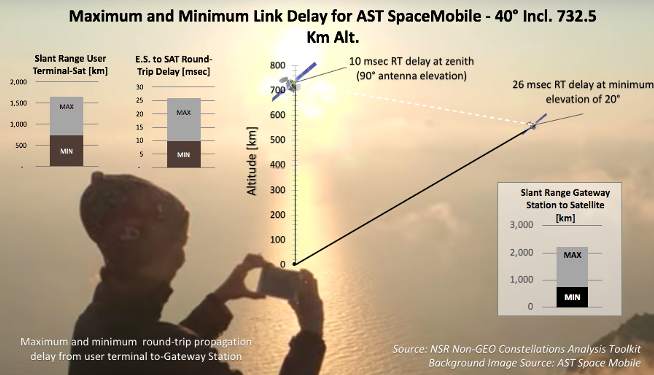 Market forces shaping the satellite-to-handset opportunity were well documented in a recent NSR article, which concluded that ignoring the opportunity is not an option for satellite and wireless stakeholders.  This new article leverages NSR’s Non-GEO Constellations Analysis Toolkit 3.0 (NCAT3) to conduct a preliminary assessment of architectural aspects and capabilities of such systems individually.

AST’s initial shell will be equatorial, covering around 50 countries in low latitude regions, including countries in Africa where Vodafone operates (subject to regulatory approval). Based on NCAT3 calculations, the first equatorial shell will reach a maximum coverage of 12 degrees N/S where 1.7 billion people reside.  61% of such population is rural. Continuous service will be available between approximately 7 degrees of latitude N/S since a minimum of one satellite must be visible on average. Once AST fully deploys the three shells listed, service will become available on a continuous basis between 60 degrees of latitude, effectively covering 88% of the landmass and reaching over 99% of the world population.

The orbital characteristics of such systems are not disclosed, but it is possible that, assuming regulatory approval, SpaceX will initially piggyback on its 53-degree shells so as to best serve the T-Mobile U.S. market. While ultimately SpaceX could leverage Gen2 satellites deployed in VLEO shells, this article assumes in the NCAT3 tools that one forth of the satellites in the LEO 53-deg shell become V2 with support for both FSS and cellular/PCS spectrum bands. Such a system may allow connections at relatively low elevation angles, but this initial assessment considers 40 degrees (same as in FSS-band Starlink) as the minimum angle over the horizon for handsets to connect with visible satellites. Under these conditions, Starlink could have cellular spectrum coverage between 58 degrees of latitude north and south, but calculations show that a continuous service will be limited to the range of 35 to 56 degrees in latitude. A larger number of cell-compatible satellites and/or support for lower handset look angles of the sky could extend such continuous coverage towards southern U.S. territories (i.e., Florida, south Texas and Puerto Rico). SpaceX will need satellites in the polar shells (not displayed) to cover Alaska.

While the announcement involves only the U.S., the Globalstar footprint will drive coverage. Assuming no restrictions in terms of market access and availability of gateway stations to serve coverage areas, Apple could leverage the Globalstar constellation to provide iPhone-to-satellite texting globally between 62 degrees of latitude (99.9% of the population; 90% of landmass). A continuous service is not yet envisioned, as this will require more satellites or handsets connecting with satellites at look angles lower than the assumed 45 degrees so as to see at least one satellite continuously.

The LEO shell will use polar orbits, effectively covering the globe but assuming 40 degrees of look angles, a continuous service will be possible at high latitudes. If such system were complemented by Omnispace’s MEO system, at least one satellite would always be visible, but handsets are challenged to communicate back with MEO satellites on the uplink given the distance. 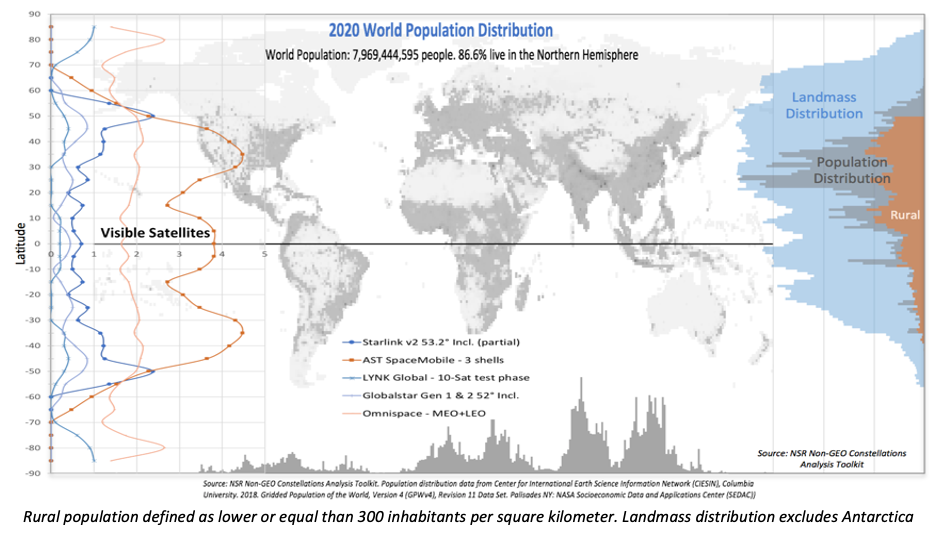 Lynk (not fully assessed in this article) is undoubtedly another important actor who has already connected regular cellphones and devices to test satellites. Lynk recently obtained commercial license from the FCC for a satellite-to-phone service. The shells listed in the table correspond to a 10-satellite test phase. Given the small size of the Lynk satellites, a high look angle for handsets will likely be required, driving need to deploy thousands of satellites for a continuous service.

Towards a Federated Environment?

Satellite-to-smartphone initiatives differ in orbital characteristics, coverage, network size, speed and intended services. From emergency messaging to voice calls to broadband data, a range of solutions will need to be developed and proven with the proper regulatory checkpoints. Challenges include managing cross-country terrestrial-satellite spectrum interference, handset power consumption and ability to close the link in the uplink direction for handsets designed to communicate with cell towers that are kilometers away, not hundreds of kilometers as in LEO and VLEO.

A federated space network and business environment may over time develop globally for sat-cellular. High-density LEO and VLEO satellite constellations can leverage their orbital rights and launch cadence to “host” own or third-party payloads (such as cell) in space to expand applicability. Convergence will thus be possible, enabling synergies in the intersections of space innovation platforms including communications, IoT and EO interplaying with terrestrial, mobile and cloud networks.

NSR’s Non-GEO Constellations Analysis Toolkit 3.0 (NCAT3) is an assembly of analytical models that x-ray and benchmark LEO and MEO satellite constellations factually.   With updateable datasets, configurable filters and user-defined inputs, NCAT3 is a standalone product that may be leveraged in combination with market data and insight extracted from relevant NSR and Analysys Mason research studies.