Home > The Bottom Line > Should Satcom Start Thinking About 6G?

Should Satcom Start Thinking About 6G?

No, 5G is not the end of the road. In fact, 6G is closer than one might think with standardization efforts starting around 2027 and early deployments rolling out as soon as 2030. To put the timeline in context, this is half-way through the orbital life of a typical GEO satellite launched today! Undoubtedly, the number 1 priority for satellite now needs to be implementing 5G, where Satcom has the opportunity to capture $162 Billion in 2021-31 cumulative service revenues, according to NSR’s 5G via Satellite, 3rd  Edition report.

Satellite has been relatively successful in influencing 5G standards early on, fostering an unprecedented level of satellite-terrestrial integration, which in turn will unlock sizable opportunities for the industry. This same logic should apply to 6G, and there will be no better time than now to influence the ecosystem. Satellite needs to understand what the application drivers will be, such as AI, augmented reality and network compute fabric to develop the fundamental technologies to meet future requirements such as security, speed and latency. 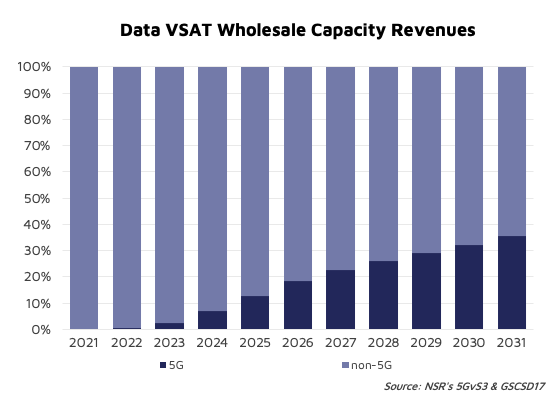 The Transformative Power of 5G is Just the Beginning

To be fair, the impact of 5G in Satcom revenues is still minimal. Multiple factors such as the delay in 3GPP Release 17 (mostly a COVID-19 effect), the slow ramp-up of 5G private networks (due to unavailability of cheap devices and scarcity of spectrum) or the natural prioritization of urban areas in 5G deployments make satellite’s share of 5G still negligible. However, the foundations for satellite to integrate in the mainstream Telco ecosystem are finally there with the new standards and mindset brought by 5G.

The recently published Release 17 incorporates a mode of communications for mainstream devices (Smartphones and IoT) that will allow them to directly communicate with satellites, unlocking a massive market opportunity. While forums such as MEF helped create the orchestration tools for automated and interconnected networks (progressively incorporating satellite operators such as SES, Intelsat or Telesat), upcoming 5G Releases will elevate that to new levels of integration setting the so-called ‘Network-of-Networks’. Beyond standards and technologies, the fact that satellite is now part of the discussion among Telcos is a game-changing factor opening doors for ubiquitous connectivity services or enhanced resiliency and security offers.

What is Driving 6G?

5G likely set the bar too high in terms of the applications it would support, especially in areas such as autonomous vehicles, automated factories or virtual reality. To truly develop those use cases, performances for Cloud, edge-computing, AI and connectivity need to continue evolving. But more importantly, those technologies would need to work in a much more integrated manner in what is sometimes referred to as ‘Network Compute Fabric’.

The emergence of new experiences such as the Metaverse will transform how we interact with the Internet and what devices are used transitioning to an ‘Internet of senses’. Smartphones might not be the core device anymore as machine-brain interfaces and multisensory virtual reality devices rise.

The satellite industry must find a way to add value to this ecosystem. For example, beyond the traditional satellite use cases of network coverage and resiliency, in this context of intimate personal-internet connection or extremely digitized factories, network security will be of the outmost importance, where new technologies such as Quantum Key Distribution over satellite could materialize as attractive business opportunities.

While the 3GPP has not established an agenda for 6G yet, multiple key ecosystem actors have set the goal to start standardization discussions in the 2027-28 timeframe, followed by early deployments around 2030. This means that 6G is still in a fundamental research phase, with a lot of potential technologies identified as “6G” that might not find its way to the actual standard. This is precisely why the satellite industry should start thinking on what attributes make it add value to future networks to start influencing the ecosystem and make sure those aspects are included in the standards.

6G might not represent a big architectural change as 5G and will probably build on fundamental concepts such as virtualization, Cloud and standardized orchestration. But with technological cycles accelerating, satellite needs to ensure that it keeps up the pace of innovation and continues to be heard in 3GPP discussions.

The Satcom Road to 6G

Release 17 set a major milestone for the satellite industry as, for the first time, it was included in a Mobile standard. But the scope was somewhat limited, impacting mostly IoT and Direct Satellite-to-Device players. Release 18 will have a much deeper impact in the industry as it could trigger transformations such as vendor interoperability and further integration of the satellite and Telco ecosystems. In a wider perspective, Release 18 will intensify the adoption of virtualization and edge-computing in the 5G ecosystem, along with introducing machine-learning and network artificial intelligence. 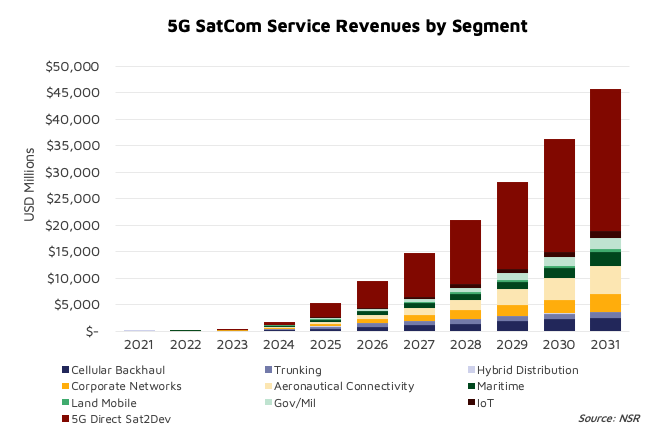 Participating in the 5G discussions early on is paying off for satellite as it is now part of the standard. This will open opportunities in the Direct Satellite-to-Device segment and with wider adoption of satellite by mainstream Telcos.

5G might not be able to meet the network requirements of new applications being conceptualized such as the Metaverse or the Internet of senses opening the door to 6G. While the architectural change might not be as big as with 5G, Satcom needs to be ready to embrace accelerating technological changes.

As FCC Acting Chairman Jessica Rosenworcel declared, “Let’s acknowledge here and now that it is time to start thinking seriously about how we can better position ourselves for success with 6G”. Now is the time for Satcom to define what role it wants to play in the future 6G ecosystem, develop the fundamental technologies to meet the future network needs and influence the ecosystem to make sure future standards incorporate the specific requirements of satellite.