Smallsat constellations for IoT have been planned for years, and launches are finally happening with constellations beginning to offer commercial services. Once dismissed as hype – the planning of these constellations has come a long way. Is it finally time for smallsat IoT to shine, and how should it move forward in an era of COVID-19? 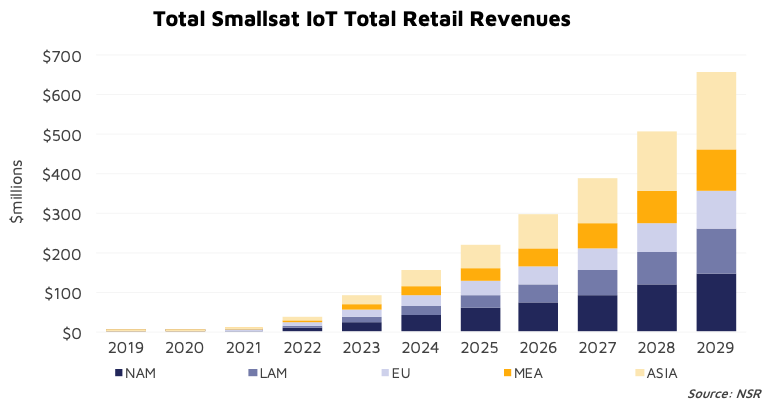 NSR’s recently released M2M and IoT via Satellite, 11th Edition report, found total retail revenues from smallsat IoT will reach over $600 million in 2029. NSR revised up the revenue picture due to increasing confidence that these constellations will (slowly) begin to flourish. Changes in the technology infrastructure, application targets, and interestingly, COVID-19, are increasing the revenue potential for smallsat IoT.

Terminals, hubs and sensors are finally coming to market, with small satellite operators either targeting 1 sensor to 1 terminal approach (1:1) or use an aggregation model, which can result in hundreds or a thousand sensors connected to a hub for backhaul over satellite. There is now an increasing gravitation towards backhauled service models in the past couple of years – the Fleet Space portal and Hiberband Via are two such products offering backhauled services, which can accelerate revenues of M2M/IoT service.

Offering backhauled services can substantially increase ARPU for satellite operators, with customers already placing orders for hundreds upon hundreds of sensors. While some customers have acquired MSS IoT terminals in the past in bulk, acquiring hundreds or thousands of MSS terminals for hundreds of dollars each quickly becomes prohibitive for many customers. Consequently, only the tip of the iceberg of potential M2M customers have so far been targeted by MSS and VSAT technologies. With the lower pricing of smallsats, the market pie will be expanded substantially – over triple the number of smallsat IoT units will become activated over MSS in the coming decade.

This is especially the case for applications where more than 200 sensors are required, for which NSR has identified as a crossover point as to where backhauled service becomes more cost effective. Below that, a 1:1 deployment is favored. Strategically though, it will be key to remain technology agnostic and not be locked into a specific format. Being able to backhaul via LoRa, Bluetooth, Wi-Fi, and others will be required in order to integrate with OEMs and existing solutions (including terrestrial) more easily. This opens up market opportunities considerably in a wide range of applications and leverages existing distribution channels and expertise in each application group.

Agriculture, for instance, will be one of the largest winners from this trend to backhauled devices, and will reach 37% of the revenue picture by 2029. This greater utilization of the satellite link will be driven by backhauling animal locations and soil moisture sensors. While Globalstar has a good share of the animal tracking market, smallsat constellations will put pressure on the company through backhauling low cost sensors. 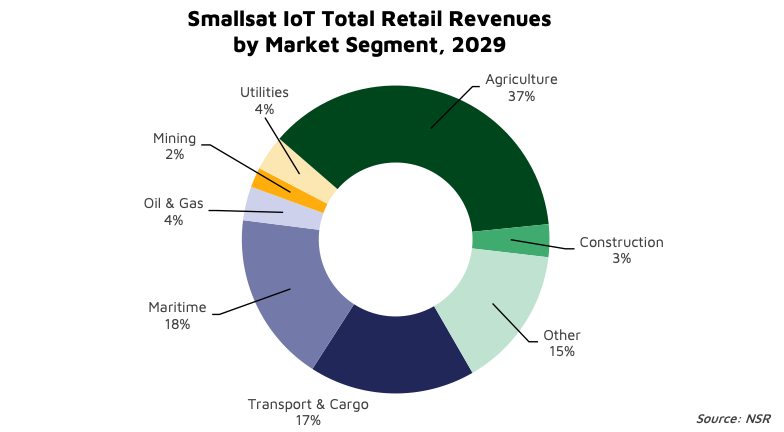 Integrating connectivity with vertically integrated applications to offer turnkey solutions will be critical for further revenue growth from smallsat IoT, as the market base widens. Hiber for instance is offering remote pressure and temperature monitoring in such a fashion, and it and other companies partnering with Amazon AWS for data and ground station services.

Also, while smallsat IoT operators beforehand were planning new types of devices – satellite connected life jackets for instance, the market is now more or less revolving around the traditional applications that MSS operators are also targeting – transportation, cargo, agriculture, and energy markets. While this doesn’t grab headlines as much – this (and more realistic pricing plans) represent a sign of maturing smallsat IoT market. Other new and potentially quirky applications can still be targeted but will be “icing on the cake” revenues.

While other applications have been hit hard by COVID-19, the satellite M2M market has been much more fortunate, with COVID-19 driving greater automation trends, and hence, M2M demand. However, the outbreak has caused heartburn for smallsat IoT constellations, quite a few launches for smallsat constellations, and with such smallsats often being launched as a secondary payload, the primary payloads often getting delayed. Delays of 6 months or more have become standard.

We will also expect to see some constellations fall over in the coming months and years, and with COVID-19, many are noting that more and more that funding has increasingly “taken longer than we would’ve thought” – investors are increasingly wary about the large field of operators entering the market. Kaskilo, Commsat and Project Mustang are now in the smallsat IoT graveyard and have pivoted away from launching their own smallsat IoT constellations. Others will fall behind with a lack of a first mover advantage. With COVID-19, only the top few smallsat constellations are expected to continue to be funded, with others having funding potentially run out.

However, with those that will make it through the “funding crunch” of the initial stages of commercial revenues, an outsized return is expected. Not only will there be less competition, but customers will have increased certainty about the longevity of a constellation, further boosting a virtuous cycle of revenues.

Smallsat constellations have come a long way and are finally poised to have an impact that has been years in the making. While in the past, traditional satellite operators have been hedging their bets with MoUs with smallsat operators, MSS operators haven’t been taking them seriously as such. Late 2020 and into 2021 will be the time this changes. However, the weak link to targeting traditional applications will be the distribution channels.

The strategy for smallsat operators should be to partner with OEMs, systems integrators and service providers, including telemetry products that use other forms of connectivity. By partnering with service providers who already know the markets well (e.g. agriculture), smallsat terminals can be integrated into existing solutions to have a “smallsat version” of a system.  However, others, such as Swarm Technologies, favor a direct to market approach. It’s riskier, but can result in outsized returns.