August 4, 2019 by Leena Pivovarova | More from this Analyst | Profile

The dedicated smallsat launch market is still far from reaching maturity, with demand still overwhelming supply; however, all signs point to progress being made in the right direction. In emerging markets such as this one, two elements are of utmost importance to attain long term sustainability and success: speed and strategy in moving through the industry consolidation life cycle. But to achieve these stages, what needs to take place so that market uncertainty is lifted and smallsat launchers offer more frequent opportunities to orbit?

NSR’s Smallsat Launch Vehicle Markets, 2nd Edition (SLVM2) report indicated significant consolidation in various forms will peak in this market in mid-2020s. At the same time, it will coincide with critical mass of the first few actors achieving orbit in early 2020s, operationalizing and scaling (or beginning to scale) to fortify their competitive offerings. NSR expects to see this consolidation in the form of traditional M&As, strategic partnerships and blends of alliances (“new” M&As), as well as actors pivoting to development of other services or serving of other markets, or in many instances, facing shutdown. 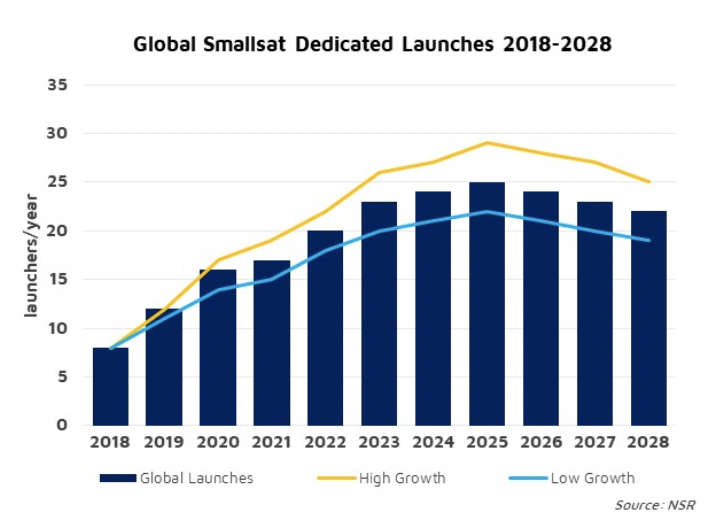 The most recent example of a strategic partnership is Lockheed Martin’s investment in ABL Space Systems through Lockheed Martin Ventures (LMV), which demonstrates a high level of confidence in this emerging market by a dominant and traditional actor. Additionally, this is not LMV’s first investment in dedicated small launch as it also invested in Rocket Lab back in 2015. The driver is Lockheed’s desire to expand into new markets and acquire a capability that it has not had before – on-demand launch capability and low-cost small launch vehicles. At the same time, LM’s undisclosed stake in ABL provides the startup company with more financial security through the development and testing of its RS-1 launch vehicle and works to boost ABL’s reputation within the space industry.

There is also some progress on the government side in terms of strategic planning around the evolution of dedicated smallsat launch capability. Indeed, policy changes and geopolitical fluctuations have a significant effect on domestic and foreign markets. The U.S. and China are poised to lead in pure quantity of dedicated smallsat launchers and launches over the next 10 years, due in part to their supportive domestic policy developments. The U.S. Government has special interest in supporting smallsats and small launch, and has recently made great progress in streamlining licensing for some small satellites, which has previously been cited as a major challenge in time and cost. On the geopolitical front, the U.S. and UK have worked to strengthen their ties in space cooperation, with the UK committing manpower to a U.S.-led hostile deterrence in space initiative as well as a $34M over the next year for a transatlantic collaboration to build and launch a smallsat constellation for its Royal Air Force.

In contrast, Russia has been notably absent from the dedicated small launch race, mostly due to its restrictive position towards its domestic commercial space initiatives and withering relations with the U.S. However, Russia is showing signs of relenting somewhat and following the reusability trend set by SpaceX. In early July 2019, the Russian government created a new entity within Roscosmos with the express goal of designing light-class reusable rockets.

It is easy to discount small dedicated launchers as just “hype”, given the oversupply of actors vying to get a piece of the action all over the world. However, the utility of responsive launch and flexible launch options has been recognized by many industry actors, from new entrants like Rocket Lab and China’s iSpace (which successfully demonstrated the maiden launch of its Hyperbola-1 rocket in late July 2019), to legacy players like Lockheed Martin, to governments of leading space-faring nations. The smallsat launcher market is projected to generate more than $2.2 B in the next ten years. To seize this opportunity, players that can achieve the appropriate speed while strategically navigating the upcoming launcher supply consolidation will emerge as winners in this story.

For more in-depth discussions about the future of smallsats and small launch, attend NSR’s panel at the Small Satellite Conference on Monday, August 5 2019 at 4 PM in Room ECC 303/305.