In January, two satellites nearly collided over Pittsburgh. Traveling over 32,000 miles per hour, the decommissioned satellites missed each other by only 100 feet. The same thing happened in early March, and last September.

Near-misses are nothing new, but with over 8,000 smallsats to be launched in the next decade, the chances of collision will continue to rise. Results would be disruptive, to say the least, and not the way the satellite industry tends to endorse. Extraneous satellite maneuvers, malfunction, orbital debris, loss of orbital slot, change in launch trajectory & schedule; these would be the minor consequences.

Until now, the industry has relied on government programs to track satellites and issue warnings. Given the growing threat, both government and commercial players have begun developing new Space Situational Awareness (SSA) services and capabilities for improved visibility and support. 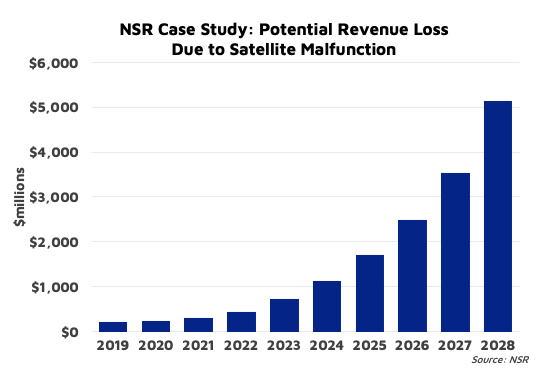 NSR’s In-Orbit Servicing & Space Situational Awareness Markets, 3rd Edition features industry-first forecasts of the size of the addressable and captured markets for SSA solutions. The key assumption behind the opportunity for serving commercial customers, such as satellite operators and insurers, is that the addressable market would not exceed the revenue potential of the at-risk satellites. When considering upcoming satellite supply, their mission profiles, lifetimes, orbits, and potential revenues to be generated, NSR finds the potential revenue to be lost by a satellite malfunction or mission disruption represents a $16 billion cumulative loss between 2019 and 2028.

On the government side, interest in SSA is growing. Several national agencies have announced plans to expand or develop their own programs, and just this week, the 2019 Global Counterspace Capabilities report was released, featuring an assessment of SSA for the first time on a nation by nation basis. Beyond commercial or environmental concerns, satellite tracking and monitoring capabilities also fall under the purview of security, with some deeming it more a matter of “space domain awareness”. This is especially important when considering the potential captured market for SSA service providers, because, while government agencies may represent the largest supporters and customers, questions of security and national interest and regulations may stand as the commercial industry’s biggest obstacles.

While the total addressable market for commercially-offered SSA services is forecasted to grow to an almost $7 billion annual opportunity by 2029, the captured market is only expected to reach $1.5 billion by the same year. As an emerging business, there are numerous obstacles to market adoption and growth. First, there remains some market hesitation. Operators in both GEO and LEO have expressed doubt over the need for such services, believing the freely-available government programs to be sufficient. Some GEO operators only view space weather as a concern, given their higher orbits, thus limiting the SSA market. Non-GEO has an inherently higher risk potential, in more densely-filled orbits, but some operators believe the risk to be more affordably and easily mitigated via replacement satellites and on-orbit spares.

Competition with government programs and policies will remain another challenge, acting as both obstacle and opportunity, as commercial SSA players must navigate around strict government restrictions, and the potential push/pull effect regarding insurance. Some proponents believe that SSA services should be mandated, part of the licensing and certification behind satellite operations, while others wish to leave the market open.

Space is becoming crowded. With thousands of satellites set to launch this decade, the risk of mission disruption will only increase, representing a matter of concern both to the satellite industry and national security. Space Situational Awareness services represent a growing opportunity, a means to help with satellite “social” distancing, but the business case will remain muddied by conflicting interest, and a fragmentation of both demand and service supply.