Home > The Bottom Line > Supply, not the Sky, is the Limit for Space Tourism

Supply, not the Sky, is the Limit for Space Tourism

January 21, 2020 by Dallas Kasaboski | More from this Analyst | Profile

Space travel. Few words grasp the imagination more and speak better to the future of our industry than the idea of civilians traveling to space. For more than two decades, private companies have been working toward this goal, tickets have been purchased, but timelines have been consistently pushed to the right. Demand has kept the idea alive, despite funding challenges and slow, meticulous technology development. However, the limit seems to have to do more with traditional economic issues down here on Earth than up on in the perennial sky.

When NASA announced its intention to commercialize Earth orbit, the door opened for private enterprise far more than ever before. As a result, the race to space is becoming very real and alive today. SpaceX’s recent in-flight, and Boeing’s in-orbit, tests are stepping stones to providing reliable commercial human space travel. Companies such as Axiom Space and Nanoracks are looking to develop a service-based ecosystem alongside launchers. And a little closer to home, Blue Origin and Virgin Galactic have been conducting tests and working toward catering to the suborbital market soon.

Since this market has been “in-development” for a very long time, we can rightly ask the questions: “Is space travel & tourism ready to take off?” and “How fast will it grow?” 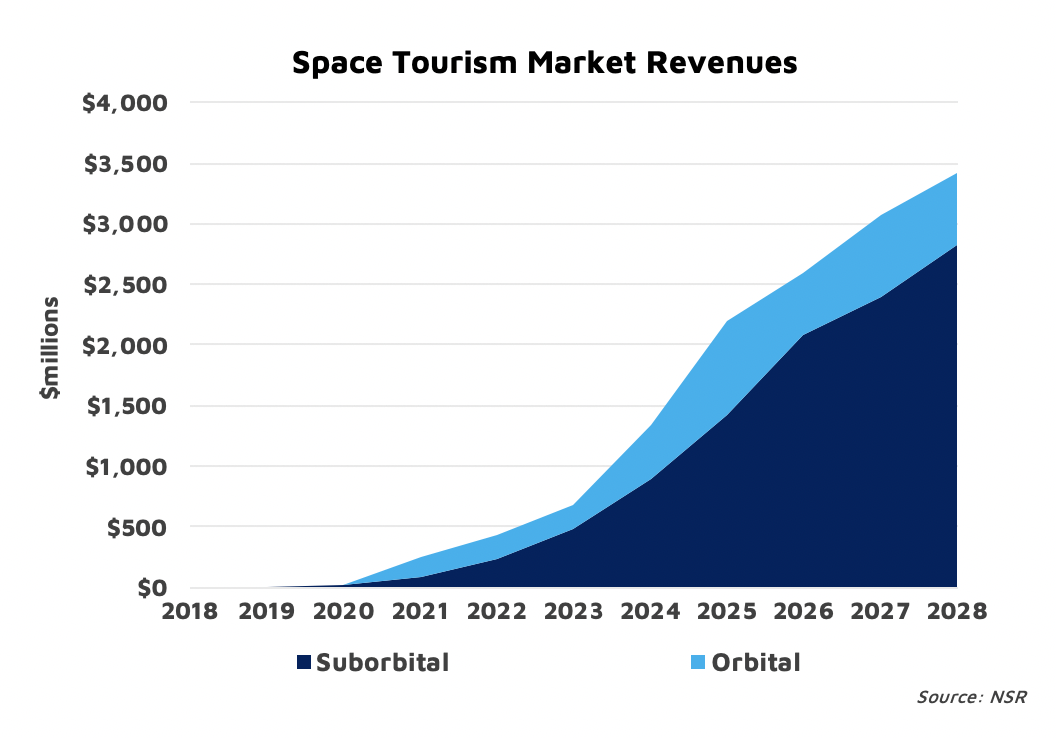 NSR’s industry-first Space Tourism & Travel Markets report forecasts revenues from commercial orbital and suborbital travel to begin this year, and grow to over $3.4B by 2028. Suborbital is expected to dominate the landscape, with 82% of revenues generated, driven by lower ticket prices, higher demand, and more competition. Additionally, suborbital launch windows are more frequent than orbital, with NSR estimating over 3,000 flights to be undertaken by the end of the forecast. The market is very promising, but not without its own challenges and limits to growth.

Supply is the main limit for the space tourism and travel market. Despite seemingly high demand, customers have waited years for launchers to be developed, flight-tested, and proven reliable. With so many players in the running, NSR believes that the first demo flights for both suborbital and orbital will begin later this year, with commercial flights sure to follow. However, while the demand points to extremely fast ramp-up, a more conservative growth forecast is more likely.

In suborbital, the three technologies to consider are balloons, rockets, and rocket-planes, such as from Zero2Infinity, Blue Origin, and Virgin Galactic, respectively. While Blue Origin has proven the reliability of landing rockets, the company has not exceeded launching 4 times per year; and SpaceX has only crested an average of 1 flight per month recently. Virgin Galactic, with its rocket-plane based design, envisions its operations will be very similar to traditional air travel. The company has even stated plans to potentially offer point-to-point travel in the future, flying customers from London to New York, or similar, via suborbit. With plans to have 5 vehicles flying by 2023, Virgin Galactic’s passenger estimates would require that each would fly 5 times per week, which may seem approachable for aircraft, is still very high when comparing with any new human flight technology, especially rocket-based. As a result, NSR does not expect operations to expand so quickly. Lead time will be required, not only for the manufacture of more vehicles, but in developing and improving the logistics of flight operations.

As a comparison, short-haul commercial aircraft fly an average of 8 flights per day, and while shorter-duration suborbital flights may eventually lead to a higher flight cadence, the time, effort, and costs point to a more conservative ramp-up for suborbital travel. Orbital tourism, despite having a longer history, comes with a much higher ticket price, and is expected to cater to the very few and lucky who have the disposable income to board spacecrafts with ticket prices in the tens of $millions.

Space tourism & travel markets are ready for take-off, finally. With a more supportive ecosystem, large investments, and recent tests from major aerospace players, commercial flights to orbit and suborbit should only be a matter of time. As with any industry, unforeseen costs and delays must be factored in when considering market adoption and growth, but given the two decades of demand backlog, it looks like the sky is no longer the limit.