Home > The Bottom Line > The In-Flight Connectivity Give Away

The In-Flight Connectivity Give Away

September 12, 2017 by Claude Rousseau | More from this Analyst | Profile

In the race to gain more customers for its onboard Wi-Fi service, airlines are following a path that could be surprisingly efficient to generating more revenues: they are giving it away.  That is, partially. Indeed, the hope is that some free airtime will lead passengers to get hooked and pay for continued or better service.

The moves by airlines to monetize what is a costly investment to their passengers in what is still a highly fragmented inflight connectivity (IFC) market, could set the stage for solid market growth for satellite players. One region to examine to determine if this future trend will hold is Asia.

With a continued surge in traffic (currently at 6% per year), airline fleet size increasing by 5% annually, and $6B in profits last year for its airlines, Asia is primed to witness an in-flight connectivity boom across the region. Adding to this that close to half of the top 20 traffic flows worldwide will be going in and coming out of Asia in the next twenty years, there is a perfect storm coming for the region where passengers have the highest expectations for and willingness to pay for IFC, according to a recent survey

Not surprisingly, NSR’s Aeronautical Satcom Markets, 5th Edition report forecasts that Asia will see the highest growth rate for IFC demand in the next decade.  So far companies such as Japan Airlines, Philippine Airlines, Thai Airways, Singapore Airlines, Qantas, Nok Air, ANA and many others based in Asia have installed IFC via satellite systems, and the number is rising steadily for the 20+ that have done so and for the others to come.

NSR expects more than 1,000 in-service IFC Satcom units flying into, within and out of the region by the end of 2017, with the number reaching 5,400 over the next ten years, or an additional 450 new units on average annually. In the same period, NSR forecasts Asia will generate retail revenues from passenger and crew connectivity of more than $550 M annually. This would put Asia in 3rd place behind North America and Europe in terms of market size for satellite-based IFC.

But the main obstacle to get there is always how to influence passengers to use their credit card to take-up paid Wi-Fi, especially on long flights. A few players in the region are tackling this problem by giving IFC away…for specific segments or time periods.

Philippines Airlines recently announced its passengers could surf for 30 minutes for free (up to 15 MB) on its international flights to entice them to use its paid Satcom-enabled Wi-Fi service. The airline thinks passengers will more easily sign up for the plans ranging from $5 for 35 MB to $20 plan for 150 MB if they get the freebee first.  These prices translate to more than $0.13/MB, still a costly value given that on the ground, it is free on hotspot access.

The case of Japan Airlines may provide another view for the transition from a free to a paid model by spurring more usage.  JAL’s promotion on its domestic aircraft for free Wi-Fi was extended from 15 minutes to unlimited on all 77 domestic aircraft this summer.  By offering this free service, passengers get a taste of the IFC service and generate a class of users that JAL hopes, when flying internationally on its overseas routes, will help take-rates on their paying service. 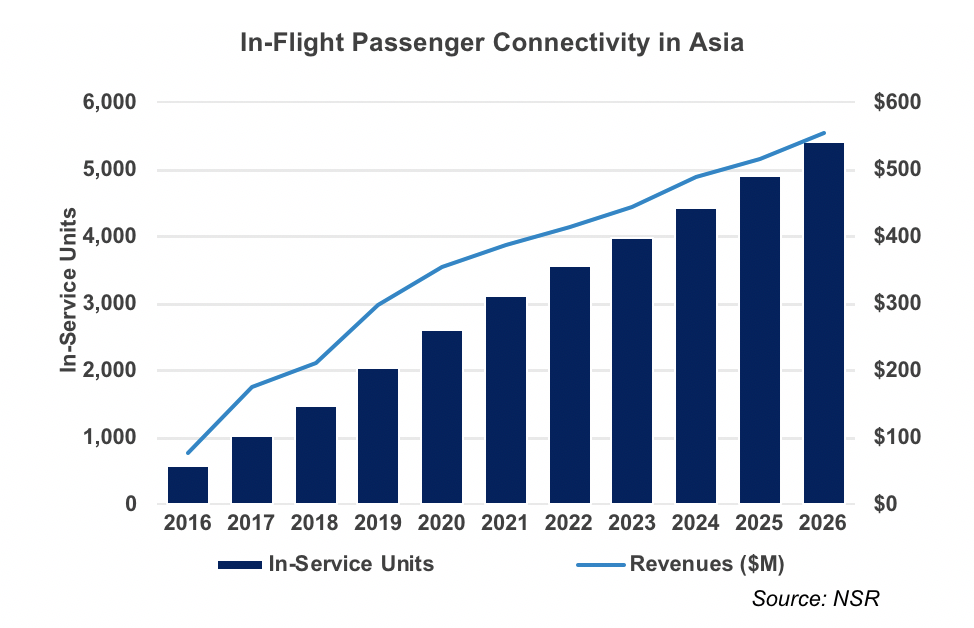 Commercial passenger air traffic growth in Asia will be a strong foundation to realize the high potential for in-flight connectivity in the region. The health of the airlines has never been so good, and demand for entertainment and connectivity onboard has never been stronger.

However, providing a taste of the service with free introductory service or a service at no-cost on some routes will certainly help in making Asia one of the top 3 aeronautical Satcom IFC markets. There will be hurdles to making passengers transition to a paid service, but the giveaway contest is likely to leave a positive impact to make IFC a revenue growth opportunity in Asia.