Home > The Bottom Line > The Next Four Years of Gov & Mil SATCOM Markets?

The Next Four Years of Gov & Mil SATCOM Markets?

Many things in 2020 have “defied norms” as it relates to the Space and SATCOM Industry – mass shutdown of cruise and aeronautical markets, significant increases in consumer and cellular backhaul demand, supply-chain disruption, and on-site installation or commissioning access restrictions. In addition to these COVID-19 related market factors, the United States will also enter a relatively unfamiliar arena whereby an incumbent presidential administration will change hands before completing an 8-year term. With the significant lead-times typically associated with space-based policy and acquisition initiatives, the industry is rightfully worried about what the future holds for the current direction of GovMil SATCOM, particularly in the United States.

Already, the past four years saw the creation of the U.S. Space Force, significant acquisition reform, more international collaboration on MILSATCOM programs, and a steady recognition of integrating commercial services on ‘day 0’. By all accounts that will continue to remain the strategic direction of GovMil SATCOM within the United States. However, as NSR explores in its most recent report on GovMil SATCOM Markets, Government and Military Satellite Communications, 17th Edition, there are plenty of practical challenges facing industry over the mid to longer terms. Chief amongst them will be a realignment of budgets in a post-COVID19 environment. 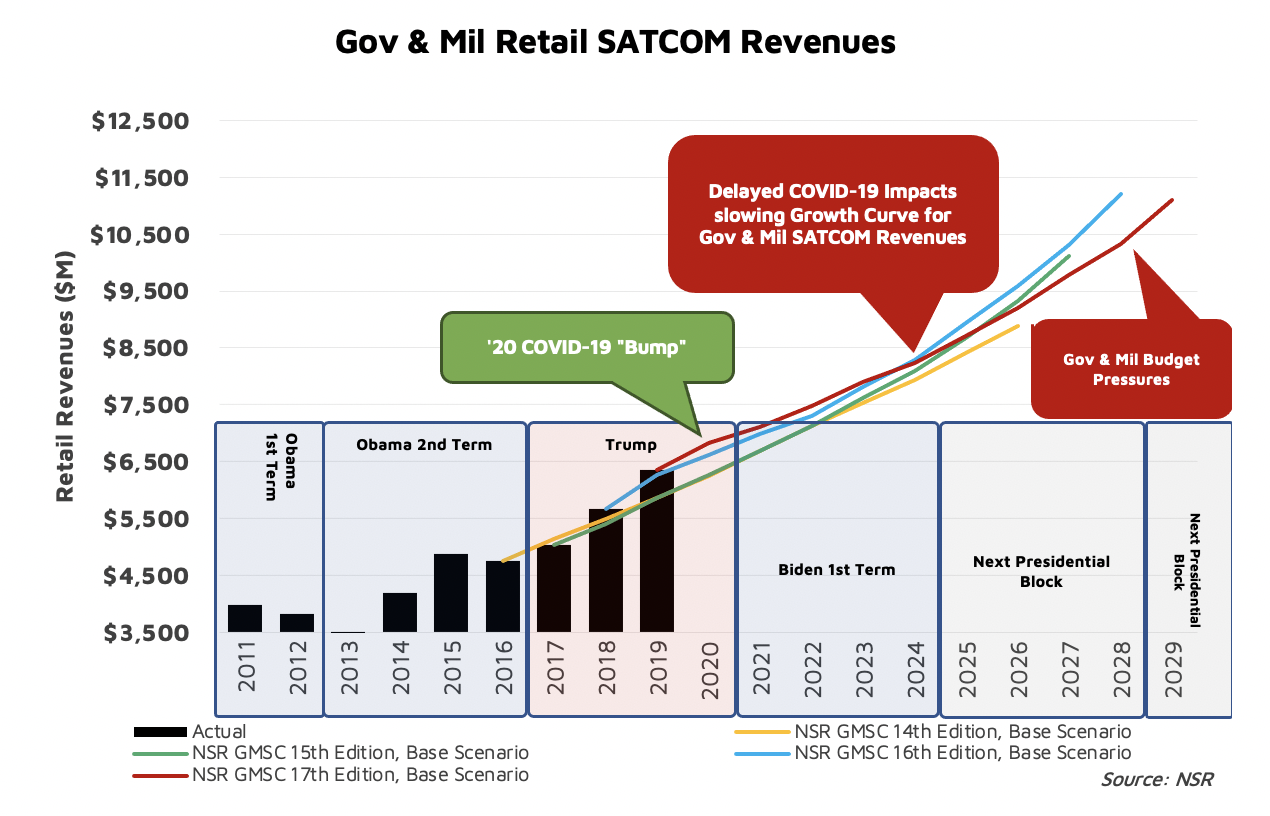 With massive stimulus and recovery spending occurring across the globe today, eventually those checks will come due, and typically the first budget area that gets trimmed is military spending. NSR projects that Retail Revenue growth over the next ten years will be at an all-time low. Whereas previously NSR’s growth projections ranged from 9.3% in our 2012 published 9th Edition to 6.4% in our 2017 published 14th Edition, growth in Retail Revenues from 2019 to 2029 is now expected at 5.7% CAGR. While cumulative revenues will exceed $90B over that time, spending challenges outside the SATCOM Markets will influence the yearly growth rates players across the value-chain should expect.

Simply, players within the value-chain should prepare for a slowdown in platform and infrastructure acquisition. While replacements are likely to occur, an expected shift in spending priorities towards social-welfare programs will result in the same or fewer number of platforms tasked with more jobs. Fewer manned ISR assets, fewer Navy or Coast Guard vessels, and likely fewer land-mobile vehicles or bases in the mid to long term. Unmanned platforms will remain a ‘wildcard’ given their significantly lower acquisition costs for the U.S. Military, but they too are likely to see budget challenges over the next few years. Yet, fewer platforms do not directly translate into a ‘shrinking market’ – rather competitive pressures amongst GovMil players are likely to intensify while demand for per-platform connectivity increases.

Technology adoption and platform acquisition for GovMil markets are two unique factors that influence the overall market for commercial SATCOM services. Whereas the past four years have seen a tactical strategy which has favored both, COVID-19 is likely to force players to prioritize platform acquisition or widespread technology adoption/proliferation. While the United States remains a significant driver of market forces, they are not the only End-user, and players should continue to see growth in the ‘Not-U.S.’ opportunities. However, spending today will need to be offset by savings tomorrow universally – and, rather than the two-pronged approach of bleeding-edge platforms combined with bleeding-edge connectivity, the market should expect connectivity to take precedence over platform. Bottom line, sophisticated adoption of connectivity infrastructure enabling new mission profiles on a slowly aging platform base.