Home > The Bottom Line > The ROI Challenge of IoT Smallsats

The ROI Challenge of IoT Smallsats

Smallsats for IoT are making noise in the press, with just this past week an announcement by a Luxembourg-based consortium for yet another smallsat IoT constellation. Myriota also raised another $15 million earlier this year, and many more similar announcements have been made.

While “everything will be Internet connected and terrestrial only covers 10% of the Earth’s surface” is a compelling investor proposition, this is an oversimplification. Keep in mind the vast majority of the billions of Internet connected devices coming online over the coming decade are low cost (such as light switches) and within terrestrial footprints with multiple connectivity options and increasingly so with new Low Power Wide Area networks.

In the recently released M2M and IoT via Satellite, 9th Edition report, NSR projected over 3.7 million smallsat IoT in-service units by 2027; this will generate approx. $133 million in retail revenues during the same year, but it only represents an overall share of only 5% of total satellite M2M/IoT revenues. ARPUs will be low on smallsat IoT networks; for example, Hiber expects its service to be offered at a few euros per year. While this is extremely low, NSR projects subscription prices for these services to increase by more than five-fold over the coming decade, depending on the application and number of data packets transferred per day. This compares to hundreds of dollars for the more typical MSS M2M services. 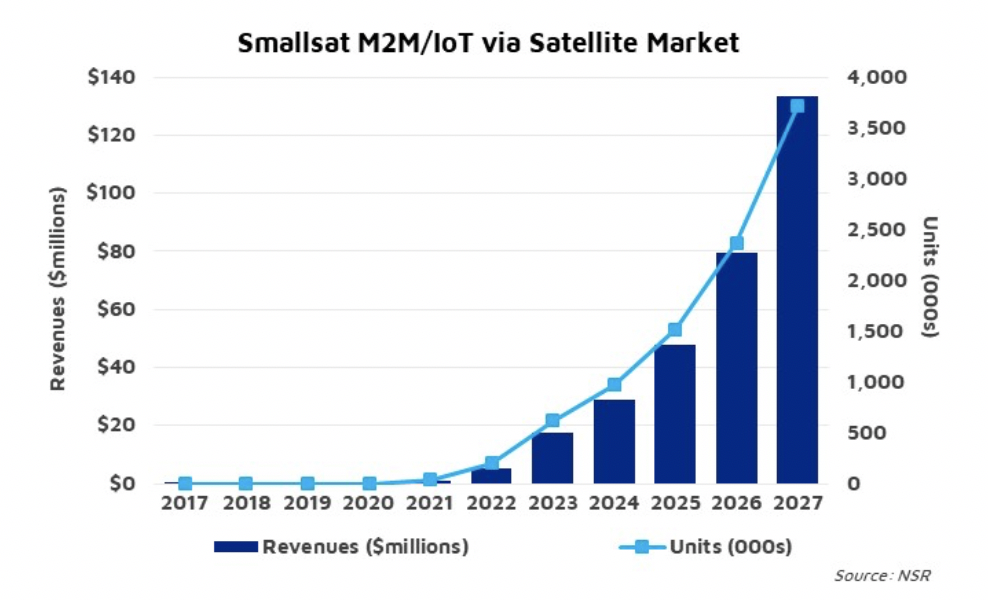 To turn a profit on these small satellite constellations purely from IoT, millions of IoT devices will be required. On each constellation. With only several million connected devices to come online on smallsats over the coming decade, competition will be extremely fierce between the 15+ constellations for this purpose, with most either merging or never actually launching.

Existing funding available for most IoT smallsat constellations is not enough to support operations in the short term, with additional funding required to fully launch. This is more pronounced due to the very high latency during the early to mid-launch of the constellations, which is a tough sell to end-users for most applications. The number of satellites is key for launch CAPEX; Kepler Communications capital expenditure is higher compared to Hiber and Astrocast due to the greater number of satellites planned, and it is this design and manufacturing costs that take up the majority share of capital expenses, followed by launch costs.

Further, satellite renewals must be considered, as the average life span for these satellites is up to 3 years. Any launch failure would significantly impact latency and IoT performance. Nonetheless, NSR expects a few smallsat IoT constellations to reach positive ROIs within the next 10 years, assuming additional financing is available to maintain positive cash flow over the first few years of launch. 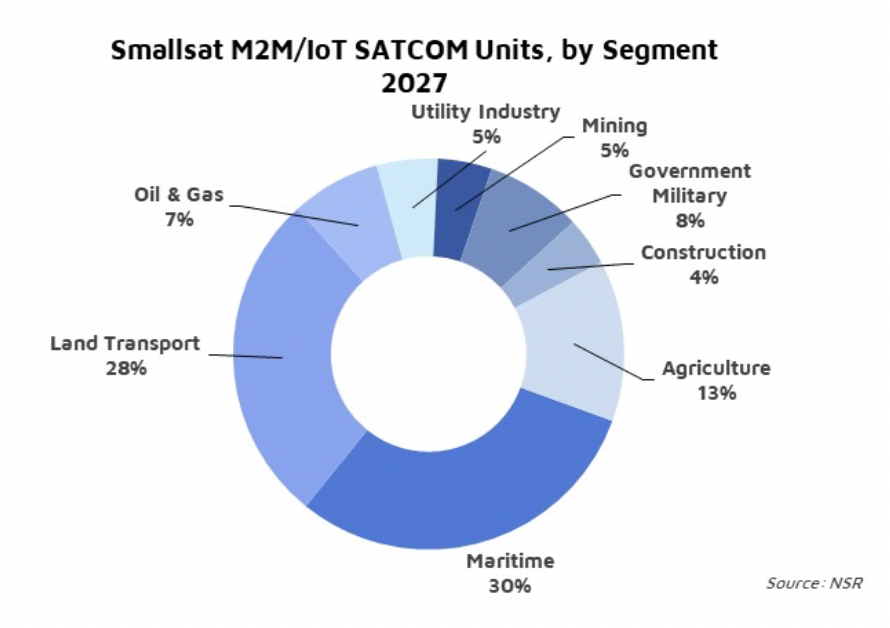 Low data rates (a few bytes) per packet transferred are fine for now; however, this fails to consider the growth of data requirements coming from big data analysis.  This results in additional levels of data that will be transmitted, despite more analysis being done at the ‘edge’ and not transmitted via satellite. This is where ‘bigsat’ constellations such as Iridium NEXT and Globalstar’s second generation network come into play. These offer greater value-added services, at low latency with higher bandwidth, especially as per bit pricing continues to drop across the board, driving new demand on these existing solutions.

Initial latency greater than 16 hours on some smallsats likewise restrains revenue growth in the short term, with all but the most niche applications able to function with this kind of delay. With a greater number of satellites in orbit, latency will decline to 15-20 minutes depending on the constellation, but this is significantly higher than terrestrial networks, which will be available for a similar price. This results in smallsat IoT becoming the network of last resort. Further, reliability, antenna performance, and value chain infrastructure are not yet ready for deployment – this will take some years to iron out. For real, critical demand of industry, cargo tracking, government, military and energy, highly reliable bigsats will be relied upon from both MSS and VSAT networks.

Smallsats aim to target many of the ‘things’ to be connected over the coming decade; however, the value-add of many of these things coming online is somewhat unclear. While bigsat satellite operators are significantly less exciting than those of the upstarts, NSR views the small satellite market as being squeezed into an awkward position between terrestrial networks, reliable MSS networks, and no connectivity required.

Consequently, the ROI on comparatively low-cost CAPEX of smallsats is depressed by even lower ARPUs and end-user demand. With most ‘new’ revenue over the coming decade coming from bigsats, developing compelling products and services for smallsat IoT networks will be the key to growth and sustainability over the coming decade.