Home > The Bottom Line > Trash Talk about Debris in Orbit

Trash Talk about Debris in Orbit

Two weeks ago, the derelict NOAA-17 satellite broke up. At the same time, NASA jettisoned a 3-ton cargo pallet of junk from the International Space Station, part of the program’s typical waste process, which will remain in orbit for several years while NOAA’s satellite will be there for much longer.

The problem with space debris is that, unless it is already in an orbit low enough to burn up quickly in the atmosphere, it stays in orbit for a very long time. While many satellites, including the ISS, currently mitigate that risk by executing orbital maneuvers (outside of nominal operations, thus costly), the problem will only continue to grow as activity in space increases. Between constellation launches, break-ups, waste, and leftover debris, orbits are becoming trashier than ever.

One proposed solution is Active Debris Removal (ADR), with commercial companies providing orbital clean-up services. Given the growing risk, both to ongoing space operations and services, as well as the health and safety considerations for crewed operation notably, it is time to ask, “Where does the Active Debris Removal market stand today and how will it develop?” 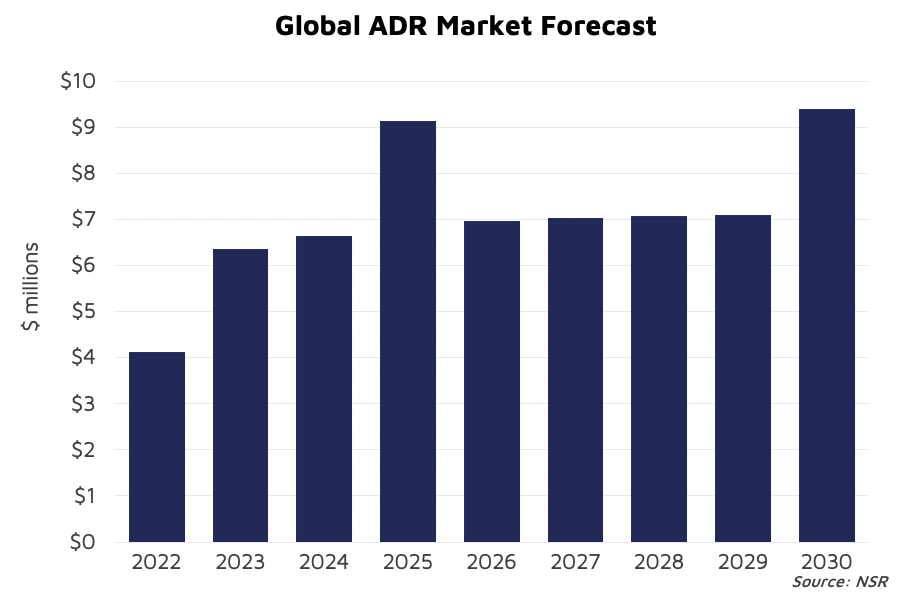 NSR’s In-Orbit Servicing & Space Situational Awareness Markets, 4th Edition (IOSM4) report forecasts for the first time that specifically-contracted Active Debris Removal services will generate more than $64 million in cumulative revenues by 2030. NSR forecasts that ADR’s cumulative addressable market will account for 179 satellites by 2030, with only 16% of those being served in the same timeframe.

While government & military will lead in the short-term, the larger addressable market for commercial customers, especially in non-GEO orbits, will drive revenues, with 66% of all ADR revenues and 68% of expected mission demand forecasted to come from serving the commercial market. ADR is an emerging market, new to the industry and so it is vital to understand the context, developments, and trends driving this forecast forward.

Astroscale’s ELSA-d demonstrator satellite just launched from Baikonur. The satellite carries with it a dummy “client payload”, which it will catch, release, and catch again to test docking, capturing, and de-orbiting maneuvers. It will then de-orbit over a five-year period, much shorter than the ‘mandated’ 25-years currently commonly accepted. Last year, Sky Perfect JSAT announced the development of their own debris removing satellite, using lasers, to begin service in 2026. Additionally, back in December, ESA signed a $104 million contract with ClearSpace, to develop several in-orbit service technologies, including one mission to actively move a leftover 100 kg piece of Vega upper stage to burn up in the atmosphere in 2025. From de-orbiting, tugging, to active debris removal, technology and funding are increasing for numerous in-orbit services.

Of course, with space markets, the question should not be, “What is possible?” but rather, “Who will pay for it?” This has been the major roadblock for in-orbit services, an industry which began by building on environmental and safety concerns, on probability and responsibility, not on economics. In a world driven, not by what is responsible, but what is fiscally possible, it has been challenging to prove the case for in-orbit services.

When we consider that the global waste management market exceeded $2 trillion last year, yet out of the 32 companies currently developing in-orbit services, only 5% of them are addressing ADR, the outlook appears grim, there appears to be a disconnect.

However, that is changing. Given the contract mentioned above, and a statement made recently by the U.S. Space Force, cleaning up orbit is recognized as a high-priority by government and military customers, and the pace of technological development in the commercial sector provides confidence that ADR is a commercially-driven opportunity. When one considers that the government & military sector is set to launch 3,000 satellites in the next decade, worth $290 billion in manufacturing value (almost 5 times that of the commercial sector), the prospect for ADR should be much higher.

Space is becoming busy and cluttered, and the image of low Earth orbit filled with old satellites, like fridges in a dumpster, is gaining a lot of attention. While in-orbit services such as active debris removal should be considered a vital evolution of end-to-end responsible mission operations, the market remains challenged owing to economics and intermediate technological readiness.

As technology and in-orbit demonstrations develop, flexibility and price reduction will increase the attractiveness of ADR, but in order to grow beyond the fringe case, the industry needs to find ways to talk frankly about better integration into the market of these clean-up solutions through collaboration, mergers & acquisitions, and improved planning ahead. And that is not trash talk, it is responsible care for the future of orbital operations for all.