Home > The Bottom Line > Turning up the Volume in EO Imagery

Turning up the Volume in EO Imagery

November 14, 2017 by Dallas Kasaboski | More from this Analyst | Profile

Satellite imagery has traditionally been sold by the scene. Customers would look at certain criteria, and satellite operators would match their request with available archived or tasked images. Sales cycles were long, and the focus was on the quality and the resolution of the data. However, increasing supply, and pressure from downstream services are prompting the development of volume-based imagery platforms, serving customers on the cloud, through a subscription or revenue-sharing system.

But who will be the main users of high-volume imagery platforms? What imagery do they need? And how should these platforms be designed?

Moving away from pixels to analysis and insights, demand for high volumes of imagery is growing quickly, especially for Big Data analytics applications. Companies such as Orbital Insights, Ursa Space, and Descartes Labs, looking to monitor entire economies, track multitudes of assets, and better model customer behavior, require platforms that streamline, and in some cases, automate the image-selection process. 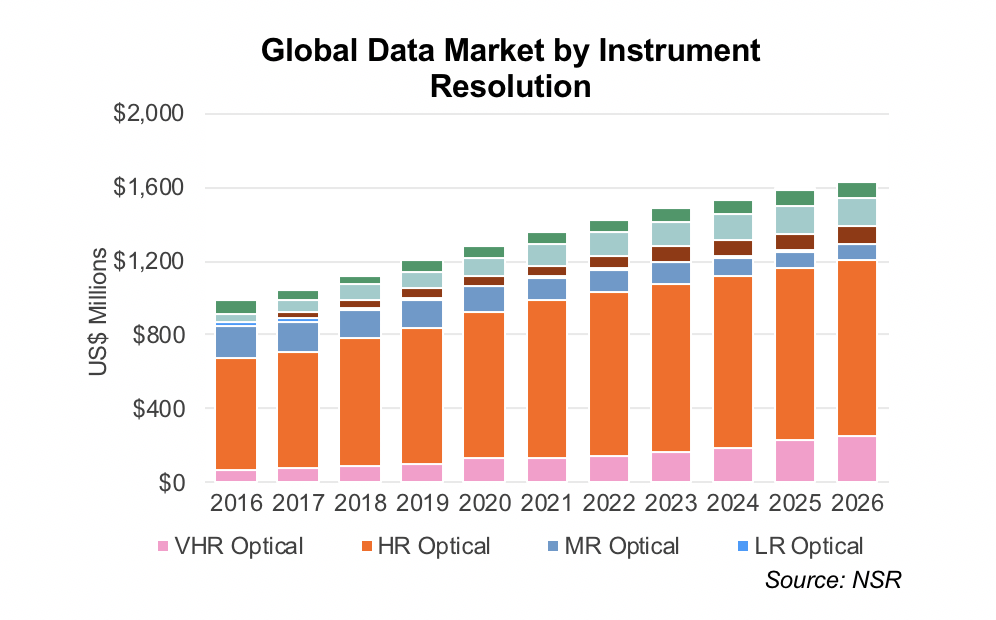 NSR forecasts optical high-resolution (HR) imagery will be in greatest demand, benefitting from lower prices than very high-resolution (VHR) ones, with high precision suited to asset monitoring. As such, HR optical imagery sales will represent 58% of the global market by 2026. However, SAR data demand is expected to increase, with new constellations planned by Capella Space and Iceye among others. Bulk-order contracts between SI Imaging and Ursa Space are just one example of SAR data becoming more commoditized.

Currently, there are over 30 commercial satellite imagery constellations planned for the next decade, and while it is unlikely that all will launch, the increasing competition will continue to drive both optical and SAR imagery prices down.

As more platforms come online, added functionality and customer-focused design will be important for securing additional business and broadening the market. Key factors for high-volume imagery services are quality, cadence, pricing, and the data platform itself. Quality of imagery differs from one vertical to another, with most service-based verticals demanding higher resolution, and many wide-area monitoring applications able to make do with medium or lower resolution. Cadence, more often referred to as refresh, refers to the frequency of data collection and delivery, better for applications looking to assess the current and future states of markets. High-volume services bring a significant price reduction for imagery, more-so in medium resolution (MR) markets where prices have already depreciated quite rapidly in recent years. Finally, as more data platforms are developed, extra features such as automation and value-added information will be leveraged to garner more customers.

While even the most traditionally-minded verticals are also making the transition to volume-based platforms, such as through Planet’s $14M contract with NGA, and BlackSky Global’s $16M contract with the USAF, this transition is slow, and more predominant in North America. Established relationships, a strong tendency to internalize imagery analysis, and different sales cycles than seen in more service-based verticals are expected to limit volume-based platform adoption in most regions. As a result, NSR expects Defense & Intelligence and Public Authorities to more strongly favor traditionally-purchased, by-the-scene VHR imagery, forecasting these verticals to represent 75% of the entire data market by 2026.

There is significant pressure for the commoditization of commercial satellite Earth Observation data today. Downstream service providers want more data, more often, to extract insightful value from imagery coupled with ancillary data sources. There is a long-established history of declining imagery prices, which is accelerated due to increasing competition and supply both up- and down-stream.

Volume-based platforms are expanding the opportunity for Earth Observation data, attracting customers and users typically outside the industry, through Big Data analytics. As such, volume purchases are better for business, tapping into a segment growing 5 times faster than traditional scene-buying has traditionally experienced.

New data providers, focused on high imagery cadence, will require volume-based platforms to leverage their imagery, and established providers have already begun benefitting from the way platforms can make archived imagery relevant again. The more traditionally-minded verticals will continue to hesitate to adopt these platforms, but cost-saving automation and more frequent and reliable data are enticing opportunities.