Home > The Bottom Line > UAS: Ready for the Imaging Market

UAS: Ready for the Imaging Market

February 27, 2019 by Shivaprakash Muruganandham | More from this Analyst | Profile

NSR’s UAS SATCOM & Imaging Markets, 5th Edition report identified the main UAS opportunities for satcom solutions is in the Gov/Mil sector, and for imaging in the commercial sector, jointly accounting for a nearly $30 billion cumulative opportunity over the next ten years. The global Defense & Intelligence (D&I) segment is expected to drive UAS SATCOM retail revenues, reaching $3.2 billion in 2027, comprising 80% of the demand while Civilian Government takes up the rest. In contrast, the commercial UAS imaging world is grounded and nascent, with imaging acquisition/analytics services reaching $620 million by the end of the forecast decade. 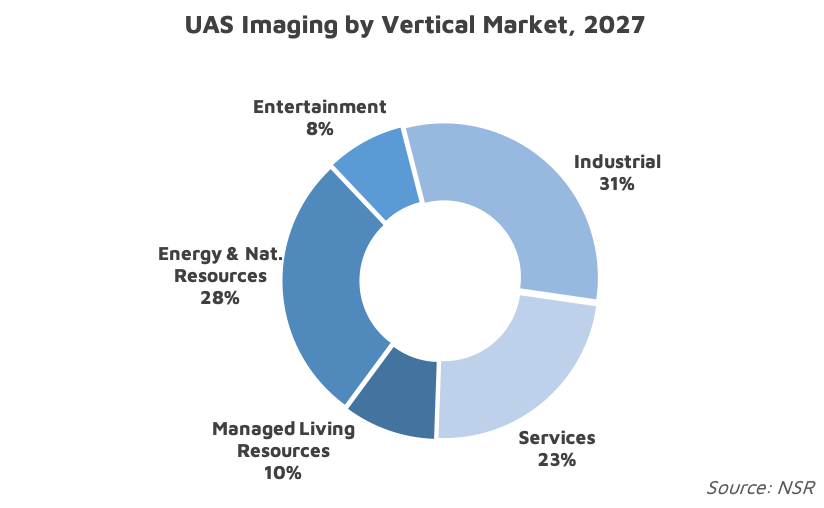 On one hand, manufacturers and operators are driving a shift in drone capabilities, and technology continues to improve with longer flight times entering the portfolio of more companies: IN-FLIGHT Data, HES Energy Systems, Skycorp and PrecisionHawk, amongst others. The idea of BVLOS as the prime opportunity rings true: drone applications could potentially scale to become cheaper and more efficient across industries. Hydrogen Fuel Cell (HFC) technology is expected to drive this change, with technology demonstrations showcasing the advantage of HFC for long endurance missions.

Developing the technology and achieving the scale needed for a business case is only half of this battle, though. Regulations remain a major hurdle to overcome, and governments/regulatory authorities will need to come onboard for such a change to really happen. And we see this picking up now: the regulatory landscape for commercial drones has begun to ease, with more and more waivers for BVLOS flights being provided to commercial drone operators around the world.

Integrating BVLOS into an overarching Unmanned Traffic Management (UTM) system will be a key step in scaling this segment. The National BVLOS Experimentation Corridor (NBEC) in the UK is a significant move in this direction. Government organizations recognize this need for the safe management of manned-unmanned airspace traffic, as evidenced by the NASA/FAA partnership with industry players for the development of a UTM infrastructure.

With the economic benefits of long endurance flights being immediately apparent, it is easy to see the HALE/MALE UAS as a potential game-changer for commercial operations. So far, this segment has catered mainly to Gov/Mil applications, as NSR noted in the past. For commercial imaging, HALE UAS provide a good balance of advantages over the smaller coverage areas of small UAS (sUAS) and low resolution of satellite, and are a potentially less expensive option as compared to manned aircraft.

Industry incumbents are just beginning to move in this direction: we see entrenched market leaders have started to invest in the development of HALE technology for commercial viability. General Atomics (GA-ASI) flew the first large UAS BVLOS operation last year with a Predator A. Most recently, Ordnance Survey, the national mapping agency in the UK announced a new high altitude platform (HAP) for aerial imagery capture, expected to be used in industrial applications. Seen as the first step in breaking down regulatory barriers that currently exist, these could pave the road for the success of the HALE commercial segment. And, support from government institutions will be a crucial step along the way.

Technology improvements in energy system capabilities have opened doors for BVLOS and long endurance UAS imaging/mapping services for commercial applications. The nature of HALE flight missions is such that an entirely new value proposition has risen, as compared to the current alternatives of manned aircraft, satellites or sUAS.

Private interests abound in the hopes of HALE entering the commercial market, from UAS manufacturers and energy solution providers to potential customers. To take this segment out of the realm of D&I and Civilian applications, however, will require key industry players as well as emergent ones to break through the regulatory hurdles of permissions and certifications, while co-operating with authorities to build out the necessary infrastructure at the same time.