Home > The Bottom Line > What’s Next for Narrowband Land Mobile?

What’s Next for Narrowband Land Mobile?

Overall, enterprise land mobile has been seeing steady growth; however, for some time there hasn’t been any major changes to the dynamic. Instead, some of the more notable growth opportunities come from the consumer market, and potentially from connected vehicles as well. With other markets experiencing higher growth opportunities due to higher bandwidth data usage, how will L-band enterprise land mobile services continue to evolve and continue to meet the needs of customers?

NSR’s recently released Land Mobile via Satellite, 9th Edition report, found that Enterprise in-service units will increase at a steady rate, led by hotspot devices, fixed voice and Handhelds. From 2020 to 2030, it is expected that there will be an increase of 183,000 in-service units already taking churn into account. 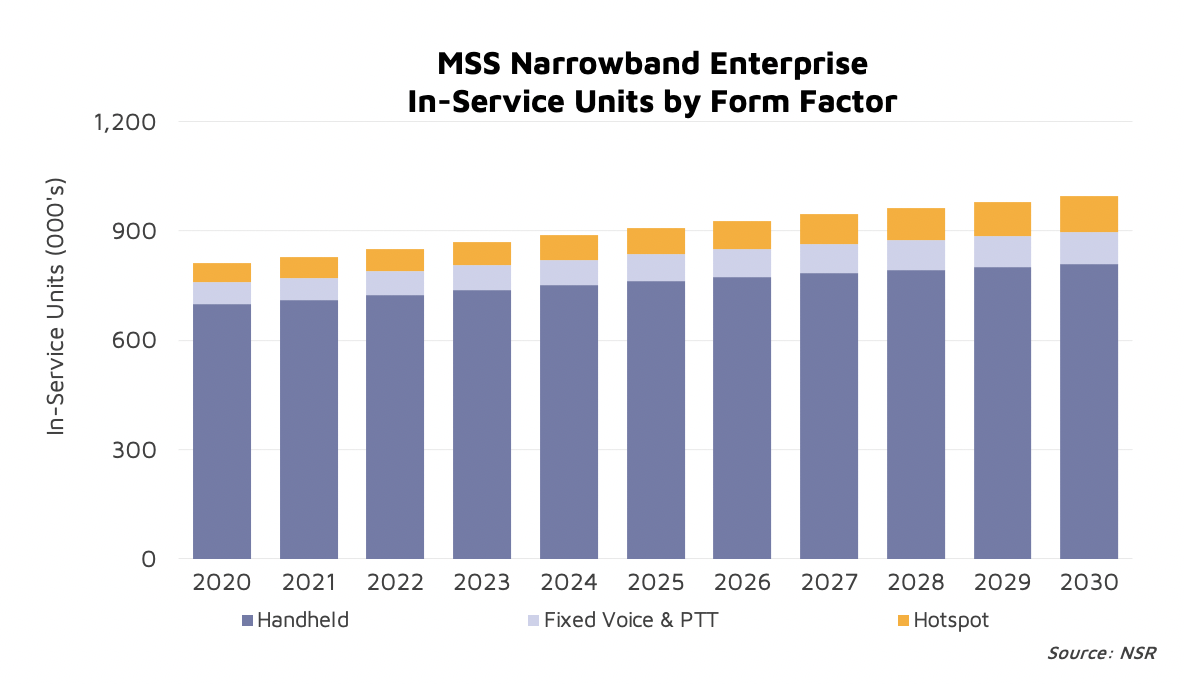 Currently, the MSS narrowband space is dominated by a small number of incumbents. However, longer term, NSR expects much more competition to arrive to serve new applications, new form factors, and new technology types. For example, Omnispace is intending to build a dual-mode network that will become a competitor to the incumbents for current MSS type solutions. AST Space Mobile might have a shot as well in this market. Inmarsat’s recently announced new LEO network, named Orchestra, fits the bill as well. This puts Inmarsat in a solid spot moving forward, and especially being able to leverage their existing global distribution networks.

For some of these new operators, IoT will be the core focus, for others, it is the consumer markets, and for Inmarsat, the priority will be serving the existing addressable market. By leveraging an ecosystem enabling price points closer to terrestrial networks and developing chipsets leveraging the mass market of terrestrial chips, price points will lower, potentially spurring a substantial demand increase. However, overall satellite operator ARPUs will decline. This decline is not only due to competition, but a much higher utilisation of dual mode services, with a lower share of time connected to the satellite.

Consequently, bandwidth will also increase over time for existing MSS type products. One of the key hotspots, the Iridium GO, only has a 2.4kbps bandwidth capacity. However, it is also expected that Iridium Certus, longer term, will provide new devices to incorporate the higher bandwidth on either the Certus 20 or Certus 100 categories. Other newer networks will also introduce higher (but not necessarily “broadband”) to compete in this market, which will not only compete against Iridium Certus products, but also Inmarsat BGAN.

The Chinese market has a potential disruption in the works for western players, with new products targeting the Chinese market now becoming available elsewhere. Compared to western markets, which generally use more ruggedized handhelds, the Chinese market currently has a stronger preference for satellite antennas incorporated into smartphones, similar to the Thuraya X5-Touch. This is set to become the future of western markets as well, as a proportion of in-service units. Should these new competitors successfully launch products in the coming years, NSR’s forecast will shift to the high-growth scenario over the baseline scenario shown in the chart above.

Put together, this overall trend results in more consumer level equipment being used in the field, or at least adapted to familiar terrestrial form factors. While NSR has already analysed the growth of the consumer handheld market, enterprise markets will feel this as well. When this is combined with the hybrid networks as noted above, NSR expects to see more consumer type devices, which are utilising hybrid satellite-terrestrial chipsets. This will spur demand higher in part due to easier implementation through existing, standards-based developer APIs.

New networks and devices have the potential to change the market dynamics longer term, although for now the status quo will remain. Several upcoming changes could shift the needle in demand for PTT, hotspot and handheld form factors in the enterprise setting. Hybrid networks are key, Iridium Certus will play a larger role, and existing terrestrial devices will contribute a greater share of revenues. As none of these changes is expected to occur in the short-term, there is ample time for operators to adjust and invest in R&D to adapt to these changes, of which Inmarsat’s Orchestra constellation is a good example. Adapting to new products on new networks will allow operators to continue to meet the needs of the current addressable market, and much larger future hybrid addressable market.