Home > The Bottom Line > Why the Optimism for Gov & Mil SATCOM?

Why the Optimism for Gov & Mil SATCOM?

With over $71B in cumulative retail revenues forecasted over the next ten years in our latest view on the market opportunity for Government and Military Satellite Communications, NSR is often asked:  Why the Optimism?  What has changed?  Where is the opportunity (for me)?

To start answering those questions, we need to first examine the macro-level trends occurring, namely, defense spending. Clearly it is on the rise across the globe as nations look to increase their own domestic capabilities, both in terms of space-based capabilities and on-the-ground acquisition of military capabilities.  Even in the U.S, with recent guidance of FY20 budgeting for defense “down” by $33B from previous guidance of $733B – the net figure is up from the $576B cap present under what is commonly referred to as ‘sequestration’. With a net-gain of $120B+ in the U.S. alone, and increased spending in NATO nations to meet 2% of GDP targets, we are seeing a net-increase in spending across the defense sector.  Moreover, as additional assets are acquired, they are not simply a like-for-like replacement, but ‘state of the art’, sensor-fused, data-generating machines.  Combined with new future force strategies that rely heavily on the gathering, processing, and distribution of data across the warfighting domain, satellite communication capabilities will be a critical piece of next-generation doctrine.

According to NSR’s Government & Military Satellite Communications, 15th Edition report, aeronautical applications, both manned and unmanned, alongside Land-Mobile applications drove the market in 2017 (as they were in 2016, 2015, etc.).  Increased activities in the Middle-East & Africa, Asia-Pacific, and renewed investments in Europe are all driving the outlook for revenue growth.  Border security applications for manned and unmanned aircraft in North America, increased training rates for U.S.-based personnel, and renewed investments in disaster response infrastructure are all leading the charge for growth.  The transition from/introduction of GEO-HTS C/Ku/Ka-band capacity adds further fuel to the market advances   Specifically, as current GEO-HTS Ka-band players expand their coverage and availability, we see that market as poised for further increases.  As interoperability with MILSATCOM networks is added as a key feature of a lot of these current and emerging Ka-band HTS options, these networks will be a core component of any next-gen Gov & Mil network.

Chief amongst a lot of these forecasts is a fundamental assumption that networks are becoming more complex.  Multi-band terminals (both in terms of the frequency, ‘capacity owner’, orbit, etc.) are seeing wider adoption – but there is still a significant hill to climb.  To meet these needs, we have already seen some investments in the terminal layer of the network.  Pick a Flat Panel Antenna manufacturer, of which there are many.  On the parabolic side, Intellian’s recent SPL100 Ka/L-band combined antenna is another good example of innovation – looking at creating a single physical antenna as network designs become more complex for government users.  Other developments on the land-side in the COTP/COTM markets continue to evolve.

Focusing on the Land-Mobile opportunity, projected to be 30% of $5 Billion net-revenue growth between 2017 – 2027, flat panels and cheaper traditional form factors are key.  New and emerging players alongside the introduction of lower-cost options for existing capabilities, are meeting the requirements for high-bandwidth connectivity across all layers of ground forces and deployments.  On the lower bandwidth side, Comtech recently announced testing of adding LEO capabilities into the Blue-Force Tracking program – another sign of just how complex network designs are becoming.

With this complexity comes the opportunity for commercial providers.  Between an improving market for Bulk-leased applications for ‘raw capacity’, to the growth of managed services – conversations from Gov & Mil end-users continue to express the need to integrate commercially-sourced services and provide capabilities into their networks.  Even as the U.S. and UK invest in their follow-on broadband MILSATCOM capabilities, and other countries invest in launching Mil Ka/X-band satellites such as France – there remains strong needs for the capabilities commercial providers can bring.  Perhaps most interesting is the role Non-GEO will have in the market (and its subsequent impact on revenue growth opportunities). 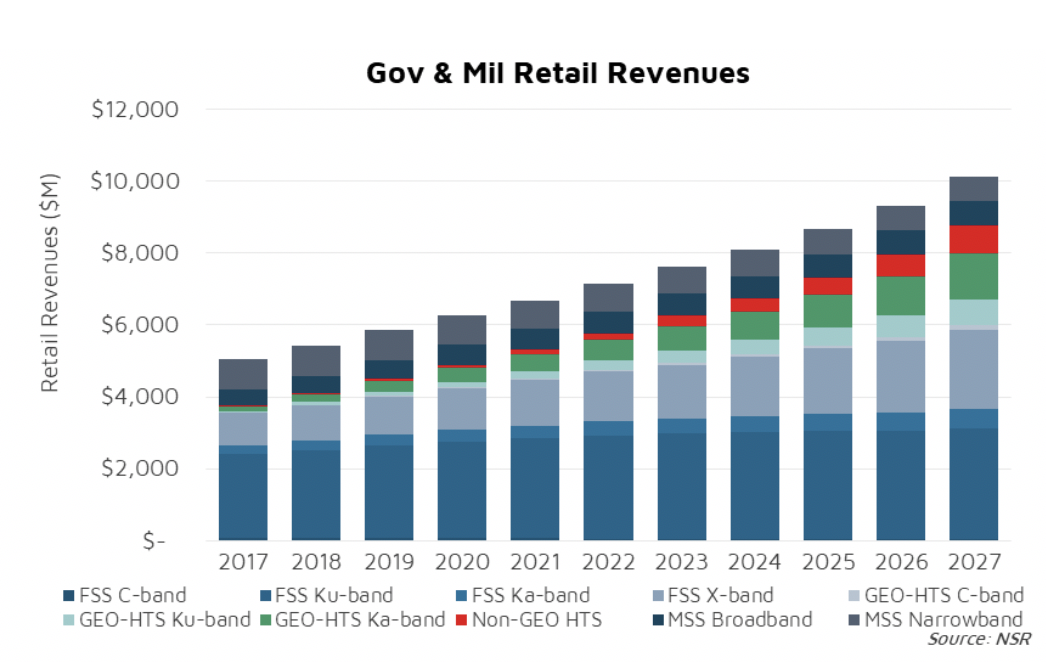 Looking specifically at the revenue opportunities on a capacity-level, FSS Ku-band will still be a significant source of retail revenues for the commercial satellite industry.  Unmanned Aircraft will be THE  market opportunity for FSS Ku-band, driven by legacy platforms that are unlikely to be upgraded to enable HTS Ku-band, much less transition to Ka or X-bands and will remain a core part of the market throughout the forecast.  At $3.1B in retail revenues by 2027, FSS Ku-band remains a biggest chunk of the current and enduring market opportunity.

What else? FSS X-band is projected to rise from around $890M today, to over $2.2B by 2027.  Why? Interoperability with and augmentation of Gov & Mil sovereign capabilities are key to this demand.  XTAR and Spanish cousin Hisdesat arguably started the market, and Global Xpress/GovSat-1/ViaSat-3 are expanding it.  As “WGS 2.0” and “Skynet 6” both heavily feature commercial options, we expect that ‘gov-like’ capabilities and frequencies will be one of the future growth-drivers of the market.

Keeping with the  theme, GEO-HTS Ka-band will gain $1.1B in annual retail revenues over the next ten years, clocking in at $6.6B in cumulative revenues.  COTM applications for Maritime and Aero drive that growth, fueled by investments in expanding GEO-HTS Ka-band coverage by the likes of Inmarsat’s GX and “I-6” program, and ViaSat’s emerging coverage through ViaSat 2/3 programs.  With the heavy emphasis on commercial capabilities in the design phase of next-generation networks, there are a lot of reasons for optimism on the prospects of Gov & Mil markets.  Expanding coverage and capacity in Ka-band across commercial and military frequencies, MEO/LEO investments, and chiefly, the digitalization of warfighting all point to more needs for more connectivity in more places.

Moreover, investments in MEO and LEO orbits will round-out the higher throughput retail revenue growth over the next ten years.  Narrowband applications will be an area of challenges, mainly as the throughput available to the form factors today push beyond our definition of narrowband rather than the need for ‘lower throughput, highly power efficient, etc., etc.’ terminals and capabilities.

Just as we have seen throughout the life-span of the U.S. WGS Program, the introduction and utilization of proprietary capacity does not come completely at the expense of commercial capacity and leads us to believe that the future opportunity for government and military satcom markets is bright  As networks become more complex, the role of the commercial industry to help stitch together these ‘networks of networks’ – just as they do for cruise ships, airlines, Oil & Gas companies, and other mission-critical applications, are only going to increase.  All said, a renewed focus on increasing defense spending in U.S. and elsewhere, adding commercial from the design-phase, and new terminals to help stitch together these more complex networks are all leading indicators for more optimism in Gov & Mil SATCOM procurements.