A (LEO) Race to the Bottom?

With the satcom industry moving to network applications and integrated service business models, the price-demand equation has changed considerably over the last 5 years. Demand is certainly increasing, but so is supply.  And anticipation of increasing demand combined with the race to market share creates price-based competition. The players looking to win this battle have placed big bets on extremely efficient HTS satellites with ever decreasing Break-even Pricing, that seems to halve every 4-5 years until 2021-22.

Although, it’s not just HTS pressure, but also the anticipation from LEOs that affects the long-term GEO strategy. And the ability to pinpoint the right pricing per vertical and per local region, coupled with servicing prospects, will go a long way in building a future-proof business. While GEO-HTS innovations by EchoStar/Hughes and ViaSat will certainly assume pole positions in lowest Break-even Pricing, NSR believes that consumer broadband focused LEOs can put forth a compelling proposition as well, albeit not in pricing. GEOs win with broadband cost economics on a per Mbit basis as demonstrated by Jupiter-3 50 Gbps lease to XplorNet at $27.7/Mbps/Mo, while LEOs are more likely to win with applications requiring latency and bandwidth density, while being deeply embedded into mobile networks. Applications such edge caching, OTT via satellite and maritime passenger (cruise) look to garner tremendous growth due to LEO supply, but just not at consumer broadband price points. 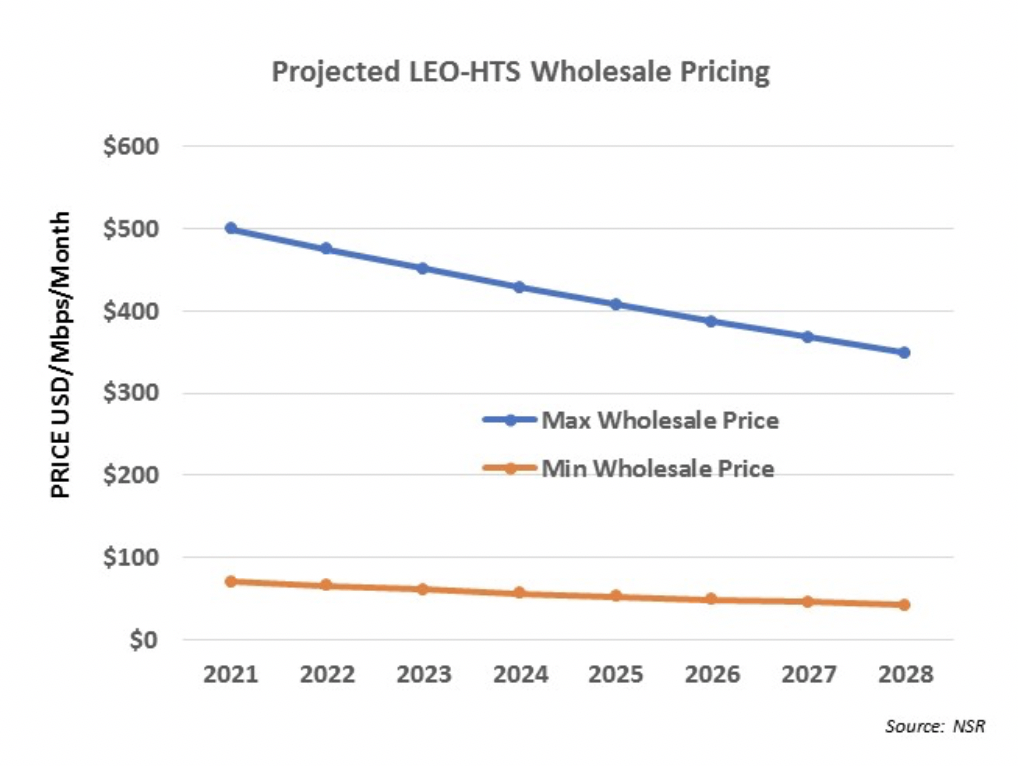 The upcoming LEO pricing thus has been differentiated into max and min ranges, to depict the wide range with which the markets could be made. Premium capacity, with inter-satellite links, and secure networks (like LeoSat) could fetch high(er) pricing in the market – albeit with low niche demand; while large constellations with 1000s of satellites (like SpaceX) are most likely to target a consumer broadband or backhaul min pricing, in order to integrate LEOs into terrestrial networks utilizing inherent latency and high density. Thus, a B2B play could remain critical in the coming years on wholesale with VHTS GEO payloads or LEOs leasing to large telcos of the world bridging gaps in sparsely populated regions or enabling 5G play through layered connectivity.

Depending on the vertical, pricing is expected to differ quite a bit. Enterprise networks with high security and SLAs, along with Govt and Aero applications, shall command a premium price, while price is expected to decrease with maritime, backhaul and ultimately the consumer business. The wholesale profitability margin is expected to remain high in 2021 at 72%-84% and should decrease depending on application and market competition to 62%-75% by 2028. The ability to generate more than 20% IRR in 7 years remains critical to returning VC investment for most players, and thus even with low Break-even Pricing, profitability margins will remain high – if and when the constellations launch. Comparing to VHTS GEO price points, it’s unlikely that LEOs may compete directly on price, especially until 2025, while MEO systems are expected to be in the mid-range serving backhaul and mobility demand.

One Caveat to Consider

It is worth noting that given the volume of capacity coming online (assuming LEOs launch) and demand trailing for most markets, there is the real likelihood of large volumes of distressed capacity “seeking to find a home”.  And while NSR’s analysis shows demand will rise and not all capacity is the same, there is concern the core target for most LEOs (i.e. Broadband, Backhaul, Maritime, Aero, Gov/mil, etc.) is the same and already served by GEOs and MEOs.  Add stranded capacity to opportunistic selling wherever and whenever possible, and one could easily envision price curves to fall even lower than NSR projects and trigger missed IRR targets.  Watch this space for sure.

While FSS and HTS plays are becoming increasingly differentiated on offerings and serving niche vs mass-markets, a third play with LEOs must also be built into operators/service providers strategy. Not all capacity is the same, and pricing is expected to follow suit with more nuances than just $/Mbit/Mo wholesale rates. In order to achieve target IRRs, and compete with GEO players on pricing, NSR expects the LEO players to pursue aggressive service models, mostly in partnership with local telcos and application-centric SPs.  Finally, the number of LEO players could severely affect the supply and competition dynamics post 2022, and IRR viability could be affected with a second wave of pricing pressure.