December 7, 2020 by Shivaprakash Muruganandham | More from this Analyst | Profile

A decade ago, cloud computing did not enjoy the front and center popularity that it does today in the satellite industry. A backend concern relegated to niche use cases, it made its presence known primarily through customer-facing big data products and internalized technologies that were essential for data orchestration at scale.

In some ways, the entry of major cloud service providers into the satellite ecosystem was well expected. Back in 2018, Jack Dangermond wrote about recent mapping and GIS trends done at a whole new scale; i.e., the geospatial cloud. This was shortly after DigitalGlobe published a retrospective on the company’s massive shift of archival data to the cloud via AWS SnowMobile. Soon, the newspace Ground Station-as-a-Service (GSaaS) market accelerated, notably with the announcement of AWS Ground Station. There were a few other instances of satellite operators and service providers working alongside CSPs, such as SES Networks’ cloud-based applications for its mining customers, or Marlink’s digital enablement strategy for shipping using Microsoft’s Azure Stack.

Tools for a Transition

Since then, cloud players have emerged as a key segment to watch out for in the satellite business, first through direct peering partnerships such as Azure ExpressRoute and IBM Direct Link, and more recently, through high profile dedicated business units as in the case of AWS Aerospace and Satellite Solutions and Azure Space. 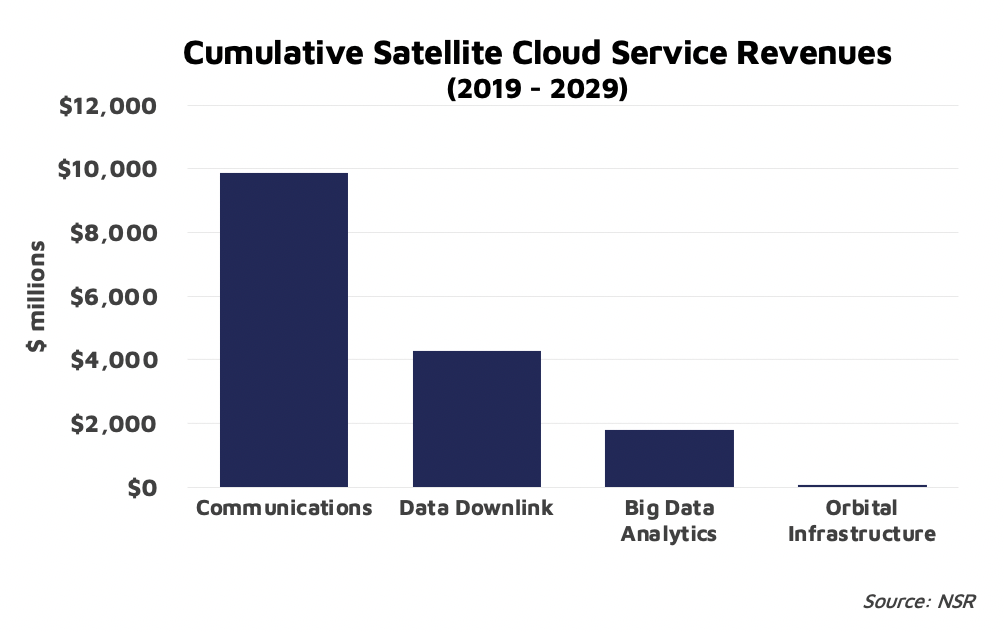 NSR’s Cloud Computing via Satellite report dove into this, identifying a growing trend amongst satellite operators and service providers to leverage cloud solutions, which is a $590 million market opportunity in 2019. While nearly 50% of this is in the satcom market, EO downlink and geospatial cloud usage makes up the other half. The industry is now witness to a transition both in space and on ground towards virtualized ground stations, software defined networks and data intensive applications, where cloud infrastructure and services are becoming key enablers helping the industry expand its footprint.

The volume of data on the cloud transported through LEO/MEO/GEO is forecast to grow rapidly at 33% over the coming decade, at close to 180 EB cumulatively for commercial applications alone. This is in contrast to much slower end-to-end lifecycles through dedicated and siloed services in the past, whether in satcom or earth observation. With both incumbents (as well as other major CSPs such as Google and IBM) being experienced service providers to government and defense clients as well as commercial space companies, the latest flurry of cloud-related activity in newspace and “traditional” space was perhaps, a long time coming.

Moves Up and Across the Stack

AWS GS and Microsoft’s Azure Orbital are in a separate category when it comes to the GSaaS landscape: neither are established ground station operators nor are they rooted in the classical newspace paradigm that gave rise to startups around the world. This is more a well-positioned lateral move of major players in a complementary (or competing, depending on who you ask) technology stack (cloud via fiber/undersea cables) expanding further into additional layers of the satellite value chain.

Granted, the existing coverage of the Amazon and Microsoft ground stations are not nearly as well developed as that of KSAT and SSC or any of the shared infrastructure service providers. However, these are still early days and the use case might be shifting: co-locating ground station antennas with existing data center infrastructure for improved access, tighter cloud integration and dynamic virtualized networks.

The traditional downstream EO value chain of data providers (satellite operators) and a highly fragmented market of geospatial analytics firms has already expanded to include data aggregators and marketplaces in the mid-tier with players such as SkyWatch, UP42 etc. vying to collate and serve a variety of EO/remote sensing data products.

A quick search for “satellite” on the AWS marketplace and Azure marketplace reveals a variety of products and services from a number of companies across this stack, as well as satcom (AIS/IoT) based data solutions. Interesting also are the inclusion of VNF and digitized IF satellite data transport services from Amergint and Kratos, as well as Kubos Corporation’s cloud-based mission control system, an early indication of the range of virtualized and cloud-native services currently in development across the satellite sector.

The satcom world meanwhile, continues to be abuzz with Non-GEO HTS constellations, yet another major opportunity for a cloud play. Amazon’s $10B commitment to its Kuiper constellation places it alongside other major non-GEOs, notably SpaceX (Starlink), OneWeb, SES (O3b mPOWER) and Telesat. Microsoft’s partnerships with SES and SpaceX provides an entry point into this market for end-to-end cloud satcom services.

While Amazon and Microsoft have rolled out dedicated business units, IBM has developed open-source SSA and orbital mechanics tools. Google powers a number of geospatial applications. A cloudification of the satellite value chain is underway, and major players continue to place their bets.

Hardware and software have decoupled, and the satellite market has opened up to competition from the wider cloud and big data ecosystems, which is why it will be an opportunity to watch as it makes its way deeper in the business.