Consumer IoT in a Direct-To-Handset World

Consumer IoT has traditionally been one of the strongest growth opportunities for MSS IoT markets, with Iridium in particular seeing record growth through consumer products such as the Garmin InReach, which currently dominates this market. Globalstar likewise has a strong showing with its SPOT range of devices. However, a growing number of announcements in the direct to handset space, including Apple’s announcement with Globalstar, and Iridium making plans for direct-to-handset services will mean drastic changes to this consumer satcom market in the future. What will this mean for existing services, and how will the industry respond to these new markets? 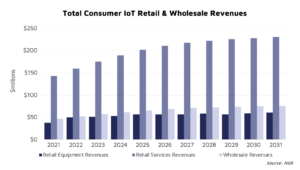 Much of these consumer devices are used by ecotourism enthusiasts hiking mountains, navigating deserts and those heading offshore. However, enterprises do sometimes use such devices for personnel safety and tracking. While there has been an explosion of growth in the past several years, moving forward the majority of growth over the next decade will occur in the near term, with the revenue opportunity decelerating as time goes by. Part of this is due to the “low hanging fruit” having already been picked. The most serious hikers and outdoor enthusiasts have already acquired products such as the InReach, but this trend also reflects the influence of direct-to-handset sales longer term as new devices enter this market, and the regional availability of these products expands.

However, these changes will not put dedicated consumer IoT devices out of business – far from it. Form factors such as the SPOT, InReach, ZOLEO and Somewear Labs will remain relevant long term by offering longer battery life, more rugged form factors, and more flexible use cases than compared to that of direct-to-satellite handhelds. Garmin for example quipped in response to the Apple/Globalstar announcement that they measure their battery life in “months, not hours” – a key advantage to the Garmin satcom ecosystem over typical smartphones today. What this means is that existing MSS solutions will become even more of a “serious adventurer” type product than they are today, with more casual users opting for direct-to-satellite handhelds.

In addition, government users, such as the forest service, are likely to continue to use the more reliable Spot and InReach devices for personnel tracking and public safety purposes. In a sense, traditional solutions support mission-critical use cases while emerging direct-to-handset offerings are more for casual users.

The number of these casual users will nonetheless dwarf the number of dedicated consumer satcom devices. NSR’s 5G via Satellite, 3rd Edition reports that over 370 million satellite-to-devices will be subscribed by 2031 – a truly mass market which will become the default, mainstream satcom product for consumers. Existing manufacturers, and their satellite partners and distributors, will thus need to innovate and demonstrate additional value and functionality beyond what direct-to-handset devices can offer. Further, such devices will need to be specifically targeted at high end and serious end-users rather than the mass market – more so than products which are on the market today.

Iridium has already laid the groundwork for this with an increasing number of devices certified for Iridium Certus, however consumer products aren’t yet using this service. Greater bandwidth levels and more messaging and some limited multimedia applications will be critical, as well as extra-long battery life. With a number of new LEO operators entering this space, now including SpaceX joining the direct-to-satellite race (which is separate from their Swarm Technologies smallsat IoT acquisition), the time for existing operators to innovate is now.

What about Extreme Casual Users?

While much of the focus has been on casual users utilizing existing handheld devices to connect to satellite for backup emergency or messaging connectivity, what about even more extreme casual users that would like such a service but without this bundled into existing product times?

Panic button type solutions for consumers have been proposed by smallsat IoT operators, to imitate existing consumer satcom solutions at far lower prices. While operators are still pondering such products, smallsat operators are likely to go direct to the consumer to distribute such services (much like Somewear Labs today), unlike other applications which go via distributors and VARs. However, keeping customers engaged can be challenging, especially for low-cost panic button style devices. 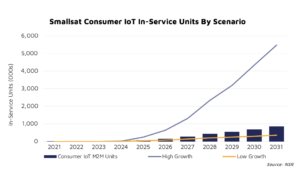 Low prices, charged annually on autopay, will be required for growth on the smallsat side of the market. This will generate comparatively little revenue, in the order of $1 per year or so, for smallsat constellations, as these type of products would only ever be used in an emergency. Nonetheless, equipment manufacturers will position such a product as a causal low-cost buy from big box retail outlets, to kept in a vehicle glove box in case of an emergency, and in a high growth scenario, NSR expects over 5 million of these devices to be activated annually by 2031.

New satellite connectivity and services enabled through existing consumer terrestrial network form factors, won’t spark the death of the likes of Garmin. It will, however, result in these devices becoming a “niche of a niche” for satcom consumers compared to the hundreds of millions of direct-to-handset connections. With that said, this is not a bad thing, for consumers and even enterprise. After all, satellite has always been a niche product! Further, increased publicity of satellite connectivity through mainstream consumer companies will also increase the visibility of competitor products – dedicated MSS consumer IoT devices included. With innovation, clear product differentiation, and a re-imagining of the target market, MSS consumer IoT dedicated devices will continue to grow and thrive.